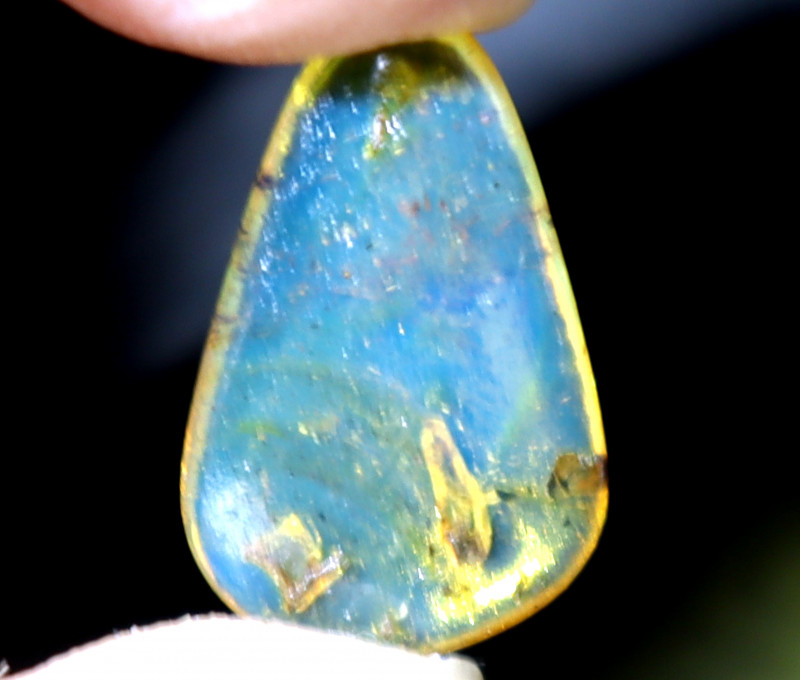 Color phenomena of authentic Dominican blue amber.
Blue amber from the Dominican Republic has been identified the aromatic hydrocarbon component perylene
as the source of the UV-stimulated fluorescence emission in the visible wavelength range from 430 to 530 nm,
resulting in the observed greenish blue color.
They also described the blue color as iridescence under natural daylight or daylight-equivalent lighting.

In the origin of ambar there are many mythical reports. Ovid wrote that a son of Helios, Phaethon, gained the confidence of his father to approve him to drive the chariot of the sun through the heavens for a day, he deviated too close to the earth, which scorched it. In order for Zeus to save the earth he struck Phaethon with a thunderbolt, he died. The tears of his mother and sister dried by the sun are now said to be known ,amber.
The Greeks named amber `elektron` it may be because of this mythical story or because it becomes electrically charged when rubbed with a cloth and can attract small particles. Homer referred briefly to amber jewelry as a magnificent gift in the Odyssey.
The writer ,Nicias mentioned amber to be the juice or essence of the setting sun jelled in the sea and hurl up on shore.
To control amber-producing areas, Romans sent armies to win over this control. Eperor Nero knew amber. Roman historian Pliny, said an amber figurine was almost the price of a healthy slave, no matter how small it was. ��Bernstein�� (Burnstone) was what the ancient Germans called amber.
Clear colorless amber was considered the most precious material for rosary beads in the Middle Ages not considering its smooth and silky feel. Electded orders of knights managed the trade, unlicenced property of rare amber was illegal in most of Europe by the year 1400.

Amber is considered to have metaphysical properties that give health , good luck and spiritual healing. Its said that it is one of the stones in the Breastplate of The High Priest. Amber is also related to the Archangel Uriel, whose name means "God is Light". Uriel heals away bitterness and unforgiven. Uriels aura glows as pale yellow. It has been used as a symbol for marriage , to assure promises.Its said to bring good luck to warriors, also said to be as a possible stone in the Brisiling necklace which is worn by Freya,the Goddess of Valkyries, in the Norse mythology.
The stone is used in fire ceremonies of ancient tribal healer. It is a sacred stone to both, Native American and Eastern Indians. As a fumigant to clear negativity, the stone has been burned,since medieval days.

By absorbing negative energy into positive energy, amber allows the body to heal itself.It releases a sunny and bright soothing energy, which helps to calm nerves.
It is said that it has also been used in treatment of dis-eases of the throat, also as kidney and bladder maladies. In ancient times, it was used as a penicillin-like remedy, being ground and ingested.

Light particles pass right through , when natural light hits blue amber on a white surface, then are refracted off the white surface. The blue amber is slightly blue colorized. But when natural light hits amber on a black surface it is not refracted, therefore refracting off the actual Amber. The glow of blue amber are the hydrocarbons in the Blue Amber that turn the suns ultraviolet light into blue light particles.
This effect is only realizable in the Dominican Republic Blue Amber category and in some Mexican amber.Any other amber will not show this uniqueness, because its original resin is not from Hymnenaea protera tree.
The polycyclic aromatic hydrocarbons, produced through a theral polymerization process started through irradiation, relax to their ground state, absorb high-energy ultraviolet photons and re-emit them as lower-energy visible photons, according to the absorbance curve of the particular fluorophore.
Recently , optical absorption, fluorescence and time-resolved fluoresce measurements in Dominican ambers have been reported. These studies demonstrate that the blue variety reveals an intense florescence emission in the visible wavelength region, between 430 and 530 m, with spectral features which are typical of aromatic hydrocarbons. Red and yellow amber varieties in the Dominican have much weaker and featureless emission, although it still have a certain fluorescence. Phosphor is similar to the Blue Amber process.
The basic difference between florescence and phosphorescence is only the amount of time that the glowing element glows.
Even though there are many theories about the origin of Dominican blue amber, there is a great probability that it owes its existence to elements such as an theracene as a result of incomplete combustion due to forest fires among the extinct species Hymenaea protera about 25 to 40 million years ago. 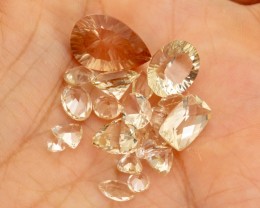 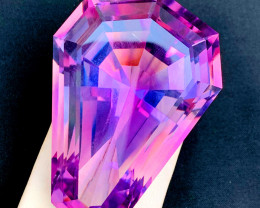 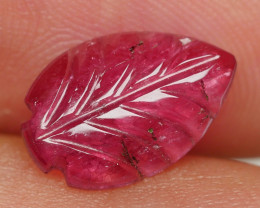 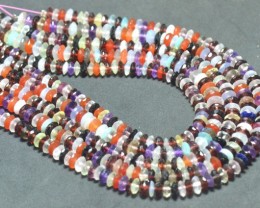 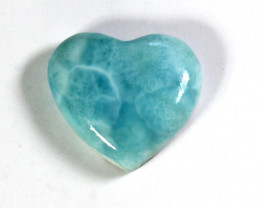 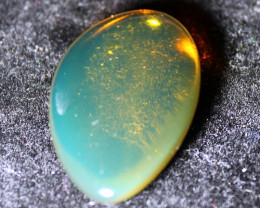 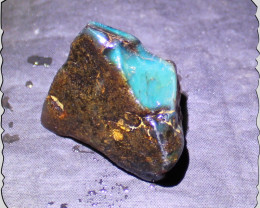 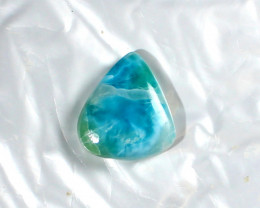 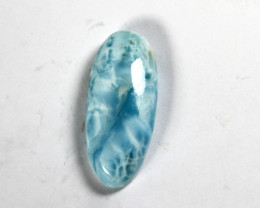 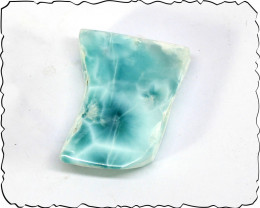