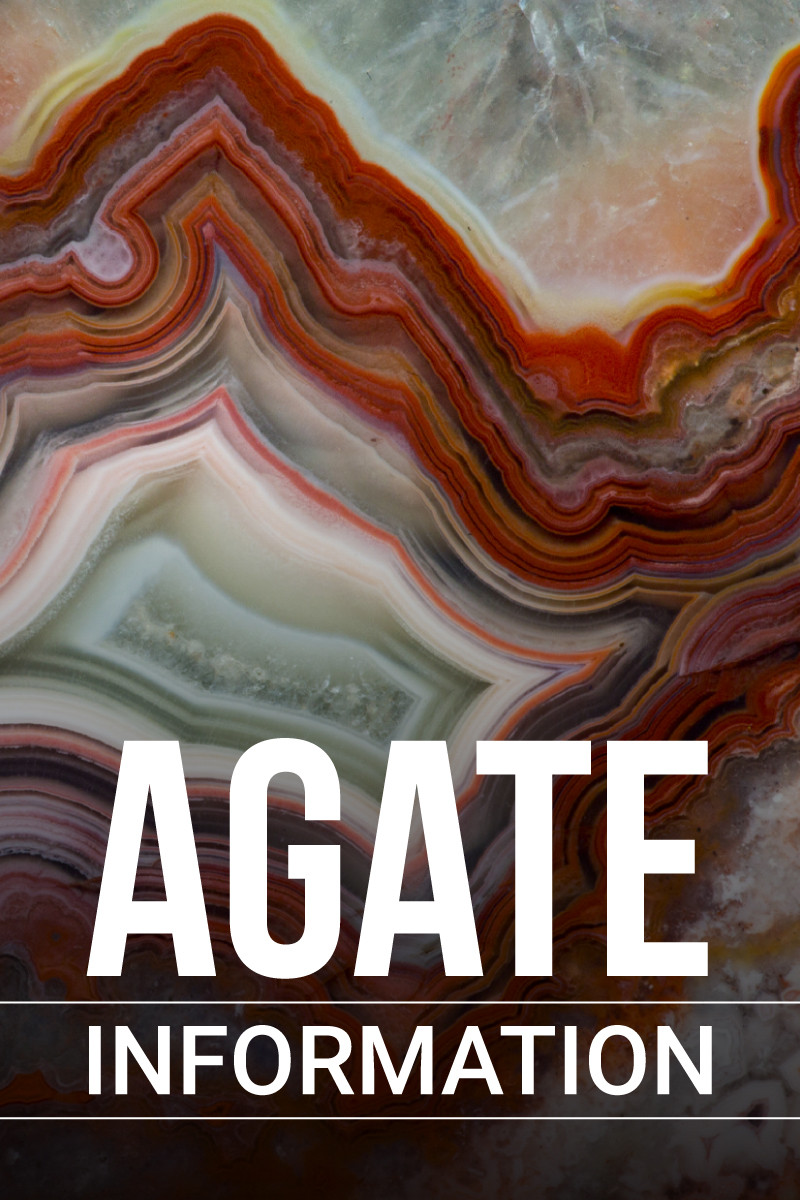 Agate is a gemstone exemplifying inner beauty. Often, this chalcedony variety looks less-than-desirable from the outside. But crack open an agate stone, and what might you find? A beautifully banded, vividly patterned interior boasting bright colors and shapes.

Chalcedony is a quartz mineral family producing earthy, highly-desired gems like onyx, jasper, bloodstone, and agate. People have used the agate stone for centuries, with its earliest origins tracing back 3,000 years.

Join us in discovering all the vital details of agate stone information, including origins, value, history, uses, and benefits.

Let’s begin with an agate definition to give you a brief overview of this dynamic gemstone.

A stunning composition of weaving patterns and vivid colors makes agate one of the most visibly diverse gemstones in the world. There are several varieties: some are solid, others are banded, laced, spotted, and burnt. Also, rare types occur when natural phenomena produce scenic landscapes and oceanic specimens.

You could hold one agate stone in your right hand and one in the left and observe zero similarities between them. But the universal features lie in the stone’s composition, which we’ll elaborate on in this article.

What is the Agate Stone?

Agate is a common rock variety from the chalcedony mineral family, but its features are anything but common. A cryptocrystalline type of quartz, the agate stone family has multiple varieties, each uniquely their own. You can find the gem in every natural color, from brown to lilac to pink to yellow — and everything in between.

Equally diverse are the stone’s patterns. Agate stones are translucent, revealing fascinating patterns caused by mossy inclusions that differ from other chalcedony stones. One agate stone can exhibit many color patterns, making it an attractive specimen where one stone is entirely different from the next.

Each specimen contains layers of material that can be flat, thick, thin, bright, translucent, opaque, or curved, creating an array of unique gems.

Each stone gets its colors by interacting with trace minerals like manganese, chromium, nickel, iron, and titanium. Polishing agate is the best way to showcase the colors and patterns within, which are each distinct.

As you can imagine, a stone this interesting is a talking point, making it a great piece of jewelry. Lapidaries and jewelry makers can artfully cut and polish the stones to best exhibit their novel characteristics.

Several factors contribute to this gemstone’s physical appearance and unique characteristics, which we’ve outlined below.

So, where does agate come from, and how do we use the stone today? The agate stone meaning is historic but holds modern relevance today. 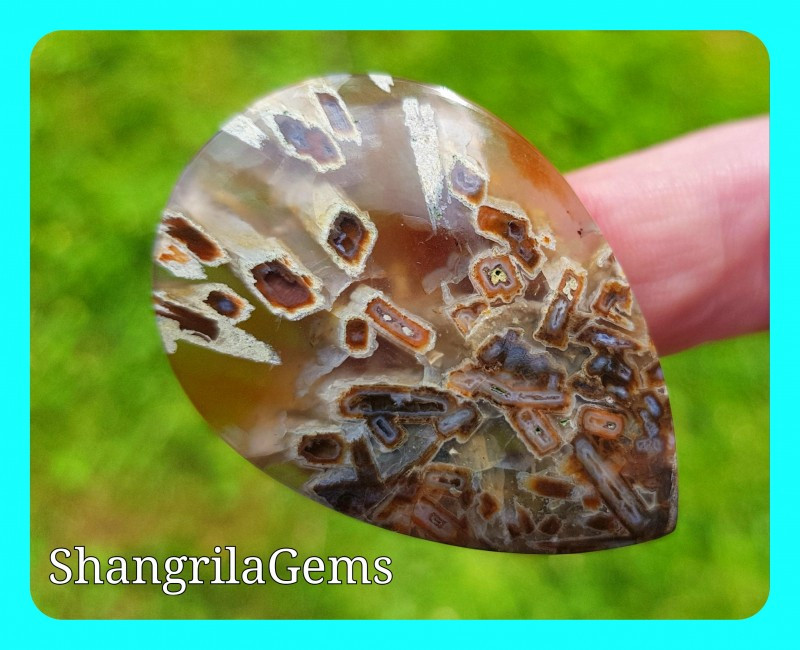 The original agate meaning comes from the ancient Greek philosopher, Theophrastus, who named the stone after the Achates River in Southwestern Sicily between 400 and 300 BC.

And what does the river’s name, Achates, translate to in English? Agate!
The river once flowed through a Greek colony where the stones lined the shallow waters for centuries, and thus, was a popular source for the material.

Agate headstone carvings were discovered at various archeological sites from the Bronze Age, including the Knossos site in Crete, Greece. During the Middle Ages, the gem was a popular ring material used by nobility for signet rings (signature stamps used by prominent figures).

There are several types of agate, and they’re categorized by physical traits. For instance, lace agate has intricate lace-like swirls, while fire agate exhibits a blazing iridescent rainbow effect. Despite the variances in color pattern, we can all agree that no two agates are the same!

You might be surprised to learn some of the unique variations resulting from each stone’s origin and formation processes. Let’s explore.

The most popular type is banded agate, which is widely available and globally sourced. Banded agate describes any bright-colored, striped inner layers that are typically dyed to enhance the internal color patterns. Crack open a geode rock, and you just might stumble on a gorgeous banded agate! 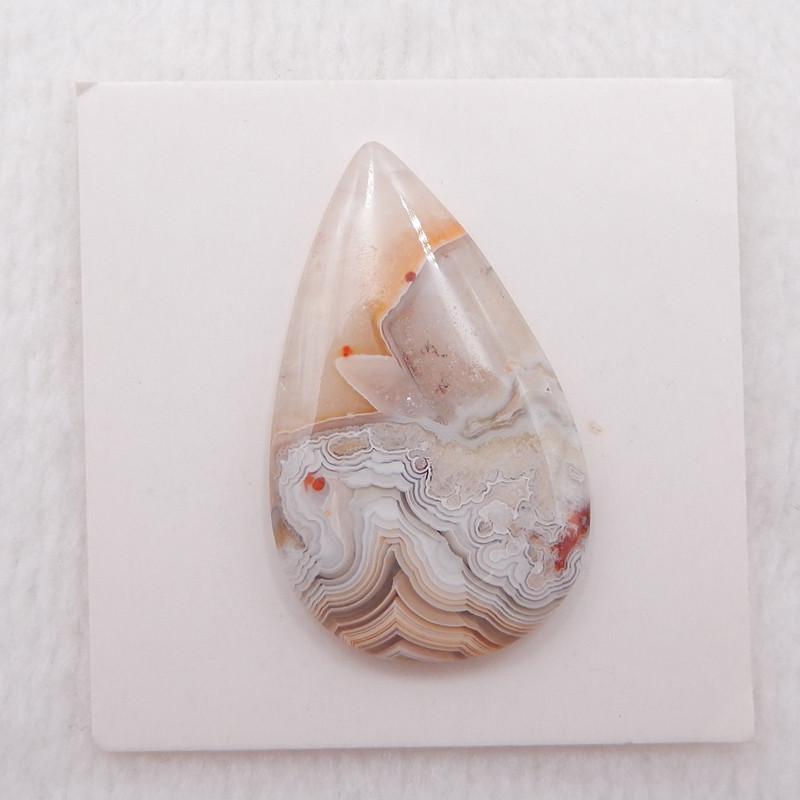 Iris agate is a finely-banded variety from Montana displaying stunning streaks of brilliant color. While the rainbow-like color-change effect is striking, it’s only visible under backlighting. In normal light, the thin bands are milky and subtle. The real magic happens when you place a light behind the gem, revealing an “iris” effect when the light passes through the stone’s fine bands.

What do you get when quartz grows within a seashell? Turritella “shell” agate is a remarkable variety where the stone grows within fossilized freshwater shells. Most commonly, shell agate grows in gastropods that have long, spiral-shaped shells. Over long periods, silicic acid converts to chalcedony and overtakes the shells, creating an organic specimen you don’t see everyday!

Fire agate comes exclusively from Mexico. Other than opal, agate is one of the few gemstones naturally exhibiting neon, rainbow-like flashes of color. The effect appears from limonite inclusions that produce a fiery iridescence. 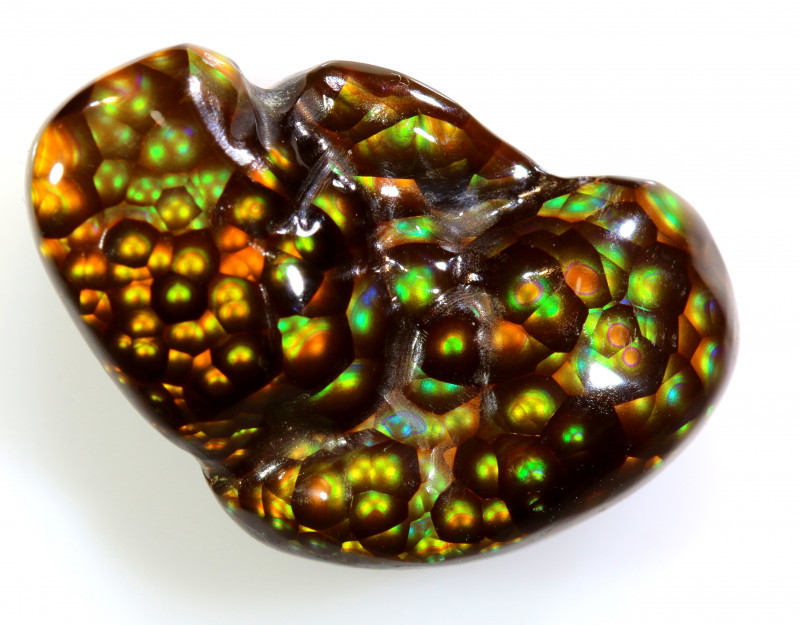 Proving there’s a variety for everyone is lace agate, a delicate, swirly design in ivories, greys, and sand-tones. Lace agate primarily comes from Mexico and offers a striking juxtaposition of earthy elegance with vivid patterns in muted colors. Popular selections include blue lace agate and Laguna lace agate.

If you’re fortunate enough to stumble on an agate that looks like a Bob Ross painting caught inside a stone, snag that beauty! Scenic agates are little treasures depicting natural scenery caused by inclusions inside the stone. Typical scenes include landscapes, shorelines, trees, shrubs, lakes, and wheatgrass.

The Pacific Northwest is the optimal climate for petrified wood agate. Like shell agate, petrified wood agate mixes two elements, but in this case, it’s fossilized trees instead of gastropods! These wooded gems are striking and the result of ancient tree trunks having their insides replaced by crystallized agate over millions of years.

Like scenic agate, these leafy varieties depict flora and fauna caused by trace mineral oxides that create colorful mossy inclusions. Moss agates have plant patterns, plume agates have feathery patterns, and dendritic agates have tree branch inclusions. Is there a gem as diverse as agates? If so, we haven’t found it yet!

Most gemstones have synthetic alternatives, and the same goes for agate. Lab-created agate uses high heat and dye inside a chamber. While synthetic agates offer a budget-friendly option akin to natural agate, it’s nowhere near as diverse and naturally striking as the natural types of agate we listed above.

Although technicians adequately recreate the natural growth process, the color pattern diversity and incorporation of fossilized organic materials is only something mother nature can perfect!

Is there one true agate color? If you guessed no, you’re right. Each type of agate stone grows uniquely, encountering various elements that influence its pattern and coloring. With this in mind, there isn’t a sole color because the gemstone is so varied. It’s common to see agate in every color, including red, blue, orange, black, white, gray, yellow, pink, brown, and multi-color.

The natural color of agate will change from stone to stone, and most often, gemologists use treatments to enhance the stone’s coloring and amplify its inner pattern. 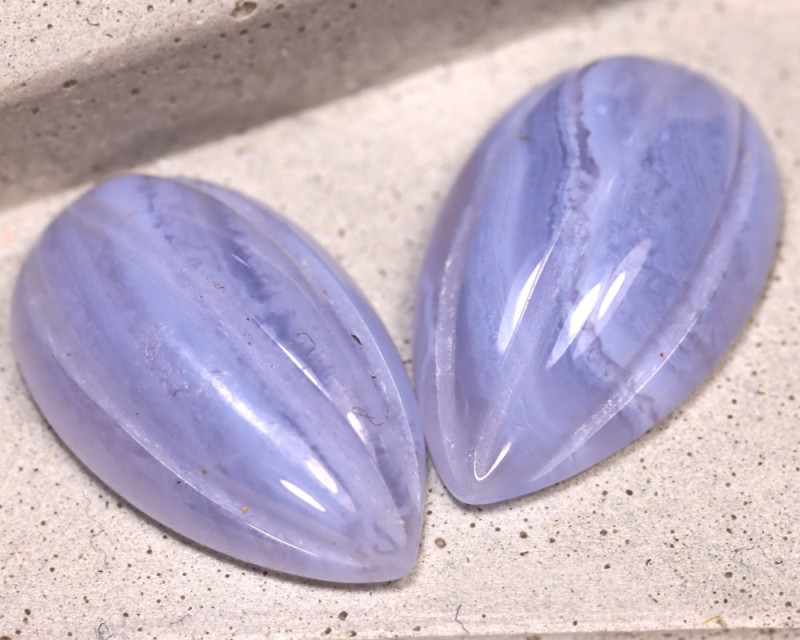 It’s common to use heat treatments to dye agate and bring out the colors within. Chalcedony is a porous material that handles dyes well. Dyeing enhancements should always be listed on products or disclosed by sellers because the process is transformative.

With dyes, an ordinary grey agate can transform into a vivid red, blue, or green one. The process began in Germany in the 1800s. The once abundant agate deposits in a town called Idar-Oberstein became depleted. To meet the demand, South American emigrants shipped grey agate to the region for treatments.

The result? A new supply of brightly colored, beautiful agate stones. Agate treatments are very common and stable, meaning they won’t damage the stone, and the color result is striking. Purists might prefer naturally colored stones, however, finding bright colors in blue and red are extremely rare, hence the common practice of applying treatments.

Where does agate stone come from? Agate forms in nodules within layers of silica in volcanic rocks and cavities. Once the cavity fills, the agate mass forms but leaves a hollow interior where the crystalline quartz juts and staggers stunningly.

Within each nodule are layers and layers of colors and patterns. In fact, every agate has its own design shaped by the cavity in which it grew.

However, you could easily stumble on one without knowing it because, from the outside, they look like common rock. Slice them open, and you’ll unveil the beauty within; vivid layers of colorful lines, patterns, and shapes.

To bring out the gemstone’s inner beauty, lapidaries polish, slice, and tumble agate in the cabochon style. Unlike faceted gems that exhibit distinctive cuts like diamonds or sapphires, agate looks best polished, making it a great collector’s item.

We’ve mentioned that each agate is unique, and that’s because origin plays a role in shaping the stone’s distinctive features. Ultimately, we can trace the stone’s source based on its inner composition and inclusions. Pretty neat, right?

Let’s look at each source and the agate it produces.

What is agate stone good for? In the next section, we’ll explore popular agate stone benefits.

Agate is a diverse stone, lending itself to many uses and benefits. Most commonly, agate is an ornamental material used for carvings, décor, and jewelry. If you’ve ever combed through Grandma’s jewelry collection, you might’ve stumbled on a stunning cameo! A cameo is a gemstone design featuring an intricately carved bust, figure, or person.

Beyond cameos, agate is a popular choice for beaded jewelry like bracelets, necklaces, and earrings.

Thanks to their gorgeous interior, polished agate slabs are striking décor pieces. If you’ve ever visited a friend or relative and noticed a prominent stone with an exposed interior featuring colorful layers, it’s likely an agate slab.

Considering all we’ve covered about the agate stone, is it valuable? You’d think a stone with such diversity and inner beauty would fetch steep prices, but that’s not the case. Agate is surprisingly affordable because it’s readily available. While the material is inexpensive, the artistry behind certain pieces is where the price increases.

Polishing agate to best display its inner beauty is an art form. The most distinctive specimens —  especially scenic agates — are the most expensive. Collectors will invest thousands into custom creations or rare varieties. However, if you’re looking for simple agate jewelry and beads, you’ll have no trouble finding affordable items.

On The Hunt For Agate?

Agates are a distinctive gemstone. Like no two tigers have the same stripes, or humans have the same fingerprints, no two agates are alike! Even if you held two agates from the same nodule, they’d display distinct characteristics in their color patterns. That’s what makes the agate stone so desirable and fun to wear.
re you on the hunt for agate? Browse our collection of agate stones, carvings, rough specimens, and cabochons today! 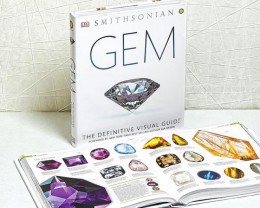 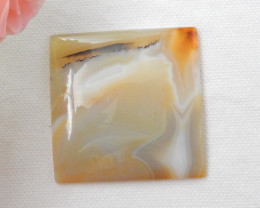 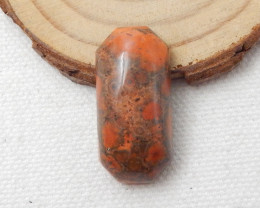