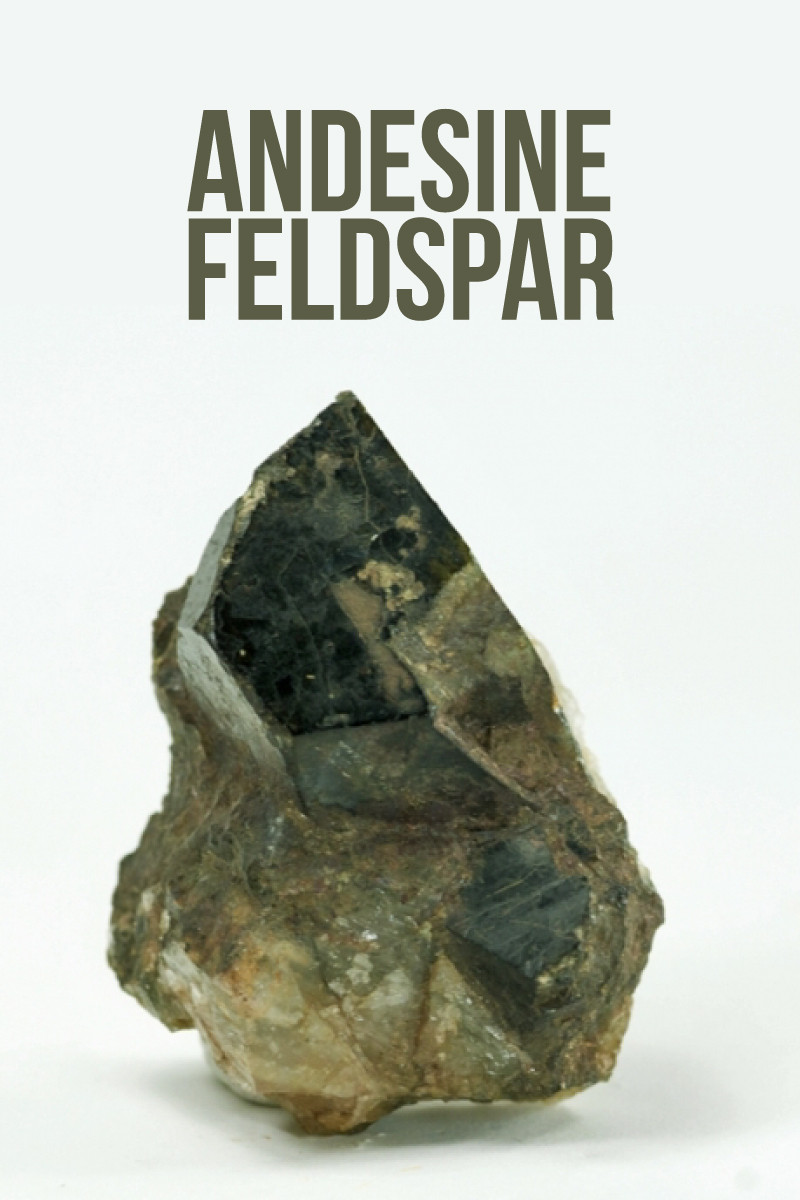 Andesine is a spicy red gemstone and a newer kid on the block of crystals! The official stone of the Congo, andesine feldspar’s striking cherry hues are even more intense than rubies and pyrope garnets.

Is andesine a feldspar? Yes! Interestingly, andesine is a combination of two feldspar varieties: andesine and labradorite, though some compositions vary.

Its bold colors and warm energy are believed to make andesine a stress-relieving, grounding stone that melts your worries away.

The mysterious crystal has even found itself at the center of some controversy, but more on that later.

Want to learn more about this contemporary crimson stone? Then come along as we unearth andesine’s properties, uses, value, and more in our Andesine-Feldspar Gemstone Guide. 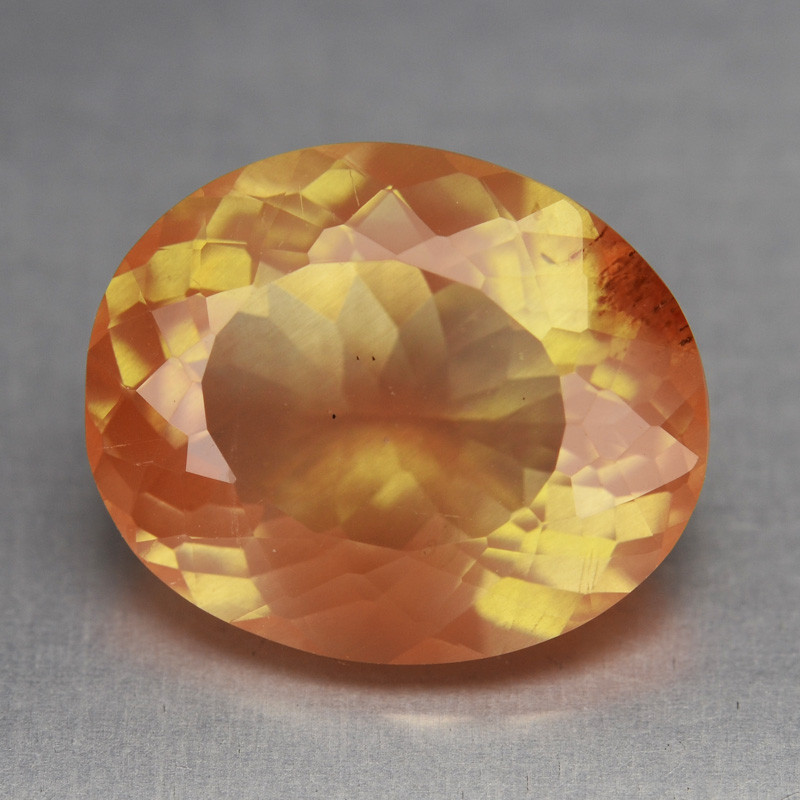 Like many gems, andesine has a few pseudonyms, many of which are used interchangeably, such as:

The name “andesine” pays homage to the mineral’s initial place of discovery, the Andes Mountains. Similarly, “labradorite” derives from Labrador, Canada, where labradorite was first discovered.

“Feldspar,” on the other hand, likely derives from terms used by German miners. "Feld" was a name for hard rocks, and "spat" referred to rocks and minerals that formed plain surfaces when struck.

Although labradorite is a zodiac stone for the Aquarius sign in astrology, andesine isn’t associated with the zodiac.

Chemically, what kind of stone is andesine-labradorite? 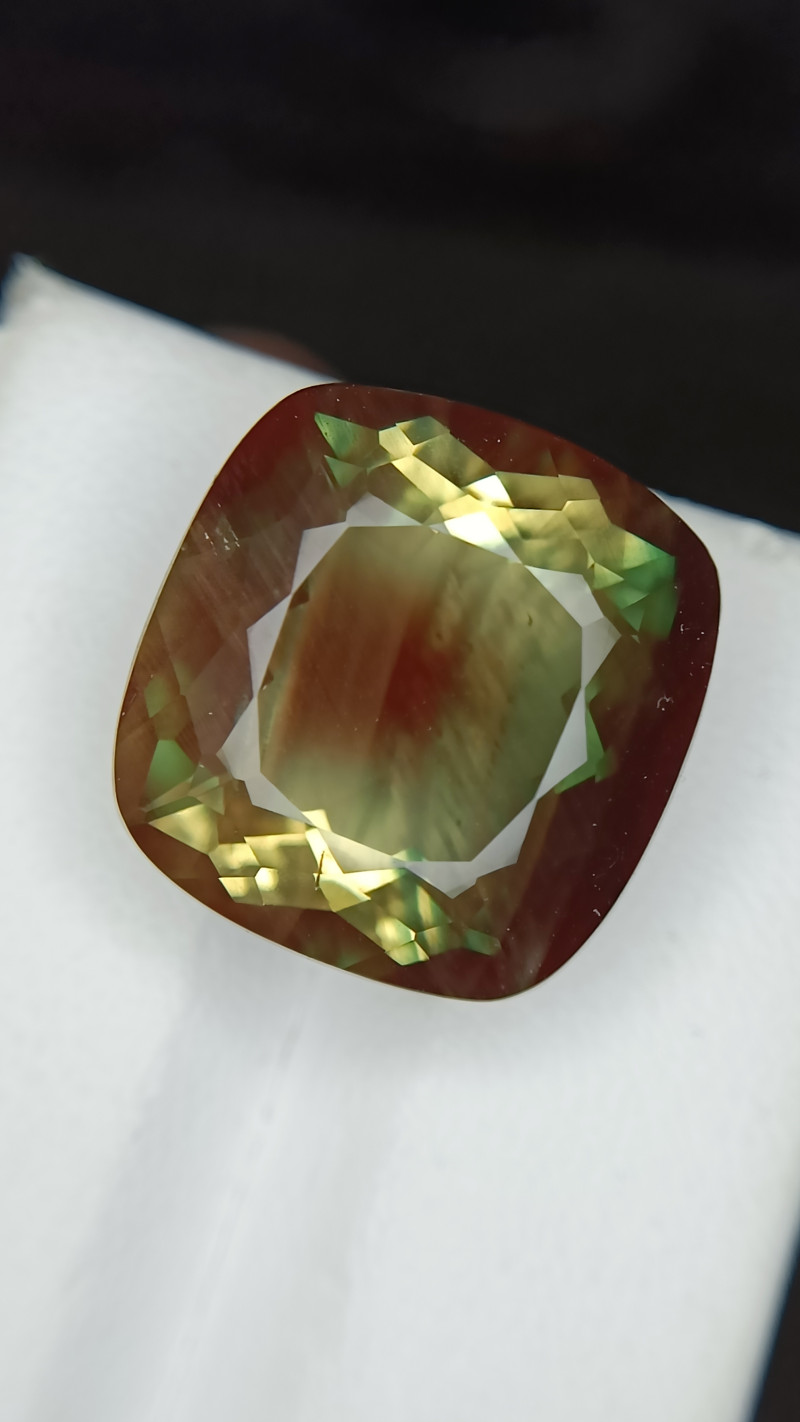 Andesine is a variety of albite, a plagioclase feldspar high in sodium and low in calcium.

Andesine occurs in various colors, from red and honey-red to orange, yellow, champagne, and green. It often shows greenish hints and a faint metallic shiller (or labradorescence). Some are even color-changing, displaying different hues under different types of lighting.

As for durability, andesine registers 6 to 6.5 on the Mohs Hardness Scale. Although moderately hard, it’s relatively brittle and prone to cracking — but don’t worry, you’ll still be able to sport some andesine jewelry!

So what is andesine stone‘s story? 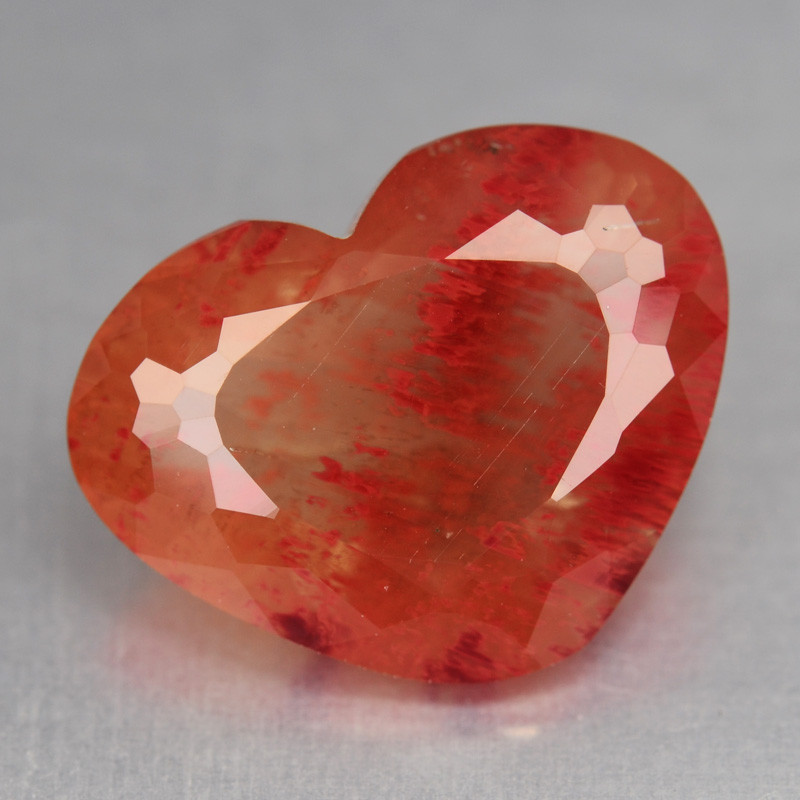 As mentioned earlier, andesine was named for its occurrence in the Andes of South America. The mineral was discovered in the Congo by Mount Nyiragongo (an active stratovolcano) sometime in 2003.

However, some experts claim that andesine was described as early as 1841 as an occurrence in the Marmato Mine of Columbia.

Although a recent newcomer to the world of gems, andesine burst onto the crystal scene, making waves throughout the industry.

When andesine first flooded the market in the 2000s, it was marketed as natural, untreated andesine straight from the Congo. However, skepticism within the industry sparked a lengthy investigation and unveiled that the supposedly untreated Congolese andesine was really just enhanced material from China.

The repercussions of this revelation rippled throughout the industry. Not only were genuine andesine retailers impacted, but consumer trust plummeted.

Within the last few years, faith has been steadily restoring. Andesine’s popularity is resurrecting and capturing the industry’s interest with its bold and tantalizing hues.

Metaphysically, what is the meaning of andesine? 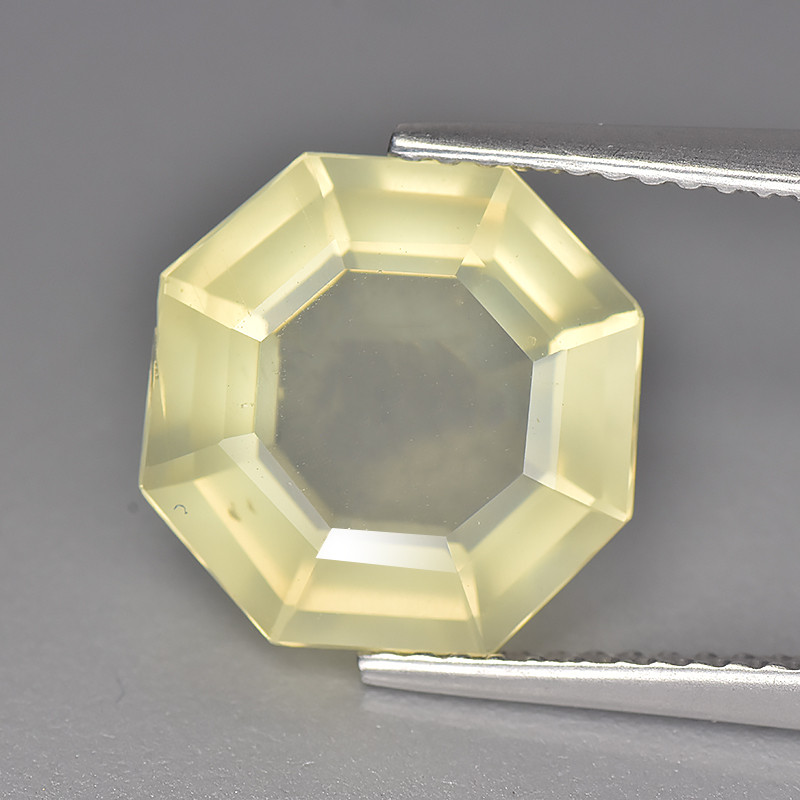 Joining the ranks of other crystals, andesine is a popular and potent healing stone for enhancing your body, mind, and spirit. After all, it’s not called the “Stone of Magic” for nothing!

The clarity and focus andesine provides are especially beneficial for creatives, such as artists, writers, and musicians.

Andesine’s energy is considered incredibly healing for your physical body. As a stone that clears negative energy, it clears away many distressing physical ailments that can worsen and impact the quality of life.

Some of the physical healing traits associated with andesine include:

Emotionally, what is andesine used for? This crystal has powerful emotional and mental benefits.

If you struggle with confidence, andesine can inspire self-esteem allowing you to feel better about yourself.

Are you seeking emotional balance? Andesine’s also known to dispel any negative energies surrounding you. The result is a more positive mindset, higher energy levels, and less stress.

Many crystal healers know andesine as a powerful stone for spiritual growth and connection. As a heart chakra stone, andesine connects you to the spiritual realm and promotes inner healing.

In addition to removing negative energies in your proximity, it allows you to expand your consciousness and keep you safe during introspective and spiritual journeys.

Moving on, what is andesine worth? It all comes down to gemstone grading. 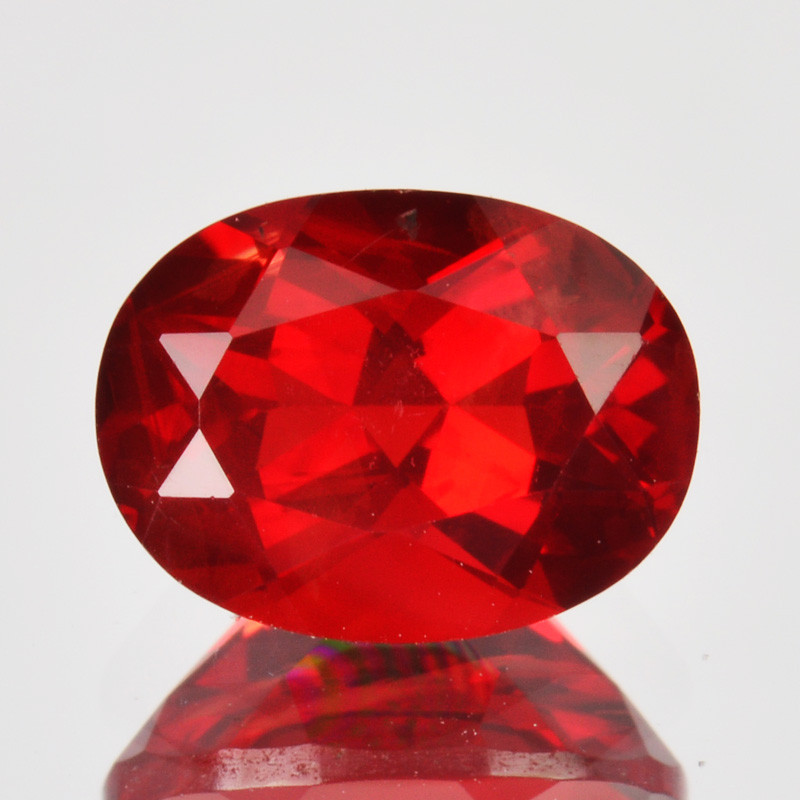 Experts grade gems based on various factors. Andesine is graded according to color, cut, clarity, carat weight, and treatments.

Red and orange andesine colors result from copper and hematite impurities. The stone often has hints of green and a slight labradorescent effect (a play of colors).

Is red andesine valuable? Generally, the more intense and brighter the hue, the higher the value.

Red andesine is rare, but not as rare as green andesine. Green andesine occurs because of a higher presence of copper. These, along with aventurescent and color-changing andesine, are scarce and sought-after gems.

Andesine is sold in various shapes and cuts. It’s most often faceted rather than cut en cabochon.

Genuine andesine of facetable quality is extremely rare (and priced accordingly). Like other gemstones, unique shapes and custom cuts are more valuable than simpler oval and round shapes.

Because of andesine’s brittle tenacity, it’s not an ideal stone for rings (especially without proper protective settings). It takes experienced lapidaries to achieve such a difficult task successfully. 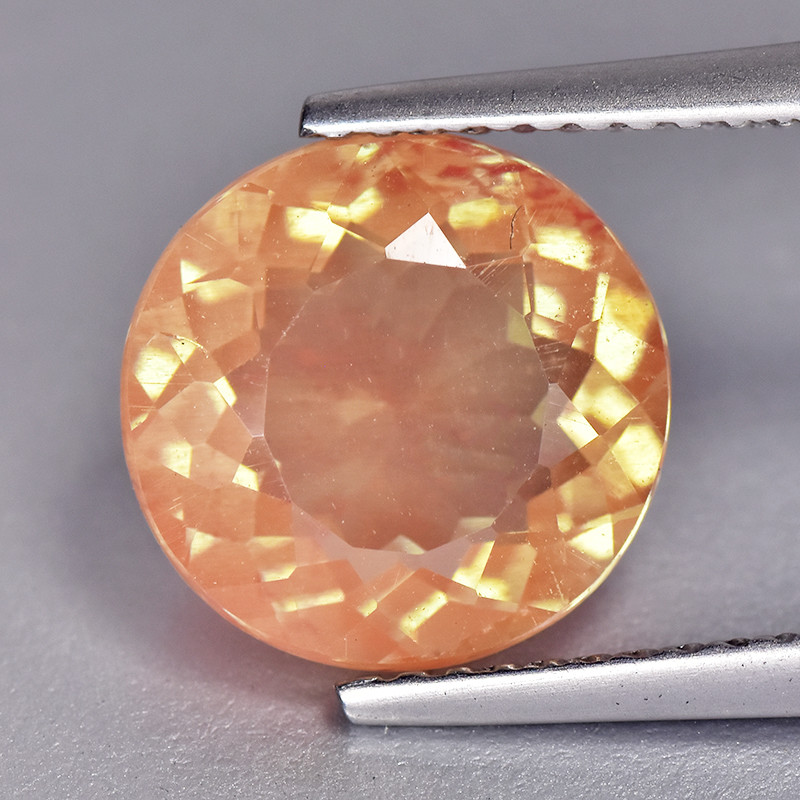 Eye-clean andesine will always fetch a higher price in the market, whereas highly-included specimens are usually sold at lower prices.

Andesine stones range up to several carats in size. Because of its moderate availability, the price per carat increases linearly with size. However, natural andesine from reputed origins can garner a premium.

The vast majority of andesine for sale is enhanced in some way.

The gem’s red hues are often achieved through diffusion (a heating process involving chemicals) with copper. This can be combined with other treatments, like irradiation (using electromagnetic radiation to enhance color).

But before andesine ever makes it to appraisal, it has to form! 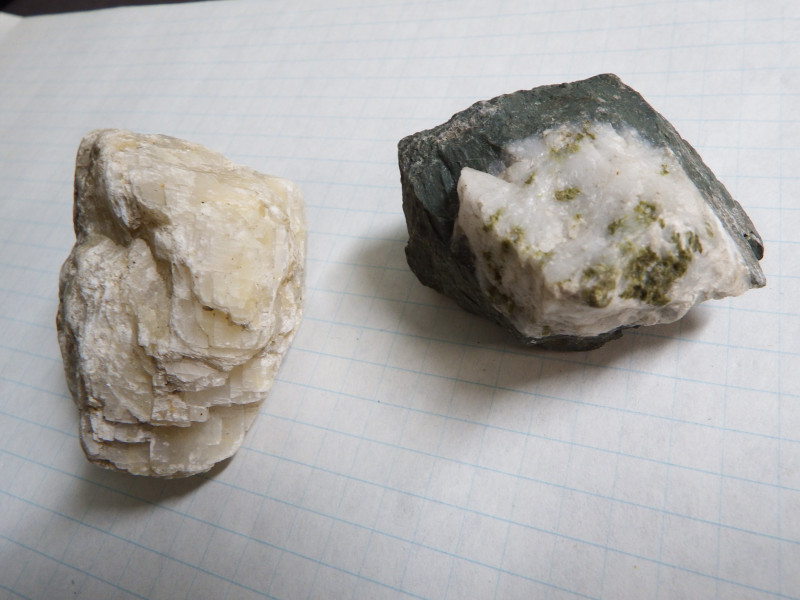 Andesine typically occurs in metamorphic and igneous rocks (called andesites). Less often, it occurs in granites and syenites. It forms when a specific magma flows out to the surface as lava and cools down.

Globally, where can andesine be found?

We know andesine comes from the Congo, but are there other sources? There are!

This mineral is most prevalent in volcanic regions throughout the world. While its original locality is in the Andes Mountains, other notable localities of andesine include:

Ready to spoil yourself with andesine? Let’s talk price. 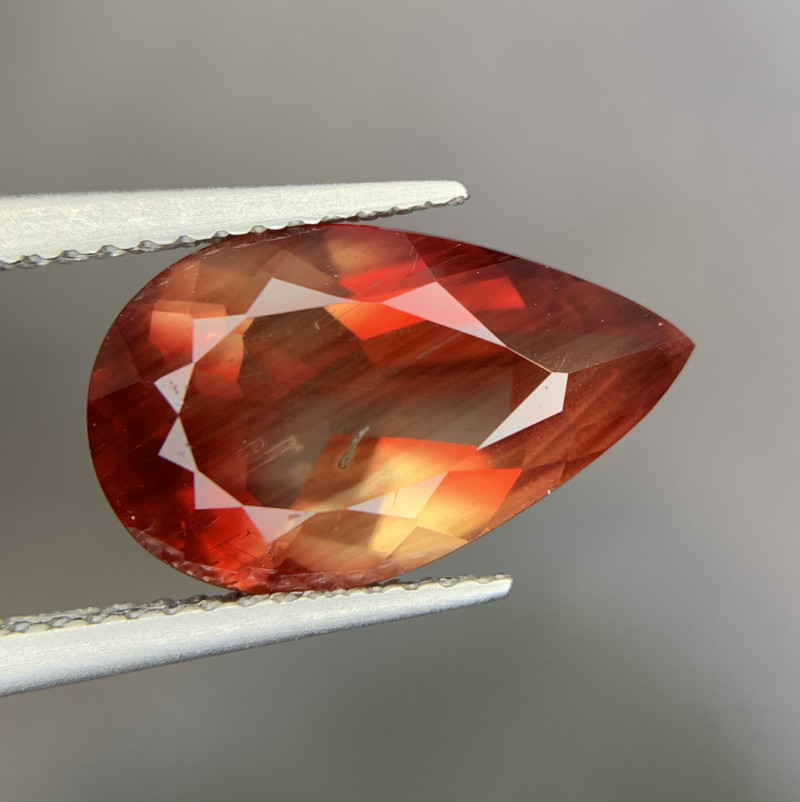 If you’re looking for an alternative to more expensive red gems, andesine is an excellent option. Its varied colors make it a versatile stone for complementing different jewelry designs and crystal collections.

In terms of affordability, rough andesine is typically the most budget-friendly. Rough specimens generally sell for $7 to $20 per carat. Lower-quality specimens can range between $0.70 to $2 per carat.

Faceted andesine is rarer and thus more expensive. These gems usually cost around $50 to $150 per carat, with lower-quality gems starting at about $10 to $20 per carat.

On the other hand, you can find cabochons priced between $10 to $60 per carat.

The price of andesine jewelry varies on gem quality, alloys used, and other gems integrated into the designs. Some typical prices are as follows:

Learning how to care for your gemstones will ensure you get years of enjoyment from your andesine.

Andesine is a hard gem, but its brittle tenacity demands you take special care in keeping it beautiful and intact.

To clean your andesine, use a soft, clean cloth and gentle, soapy water. Rinse and dry it thoroughly before storing it in a cool, dark place away from harder materials that could damage the gem’s surface.

Be sure to keep your andesine away from:

Follow these tips, and your andesine will endure the ages. 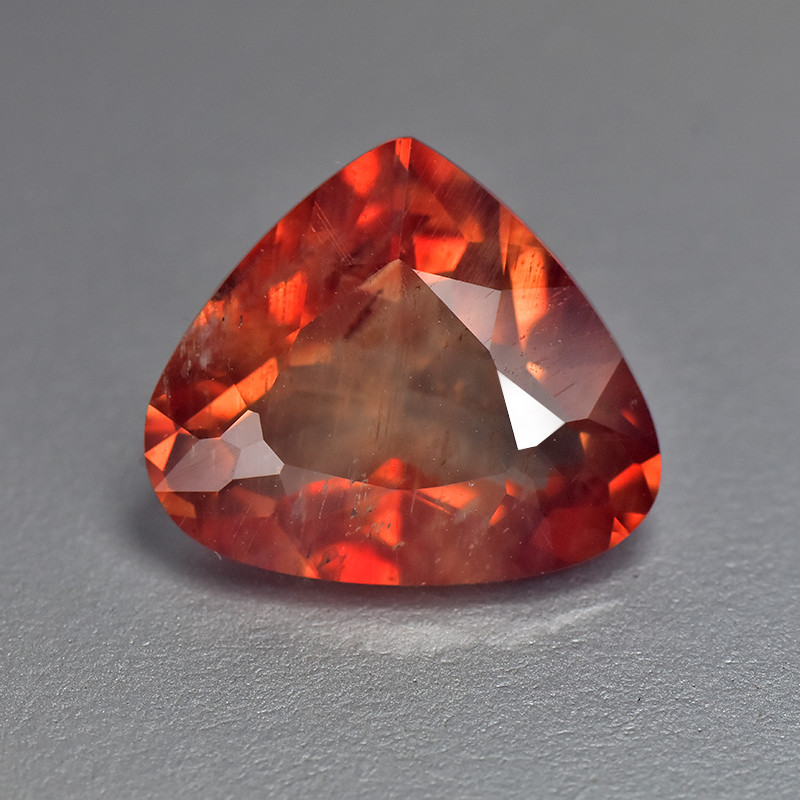 Cure the Blues with Red Andesine-Feldspar!

Nothing good comes easy — that is especially true for andesine-feldspar!

Though the gem found itself in some scandal in recent years, andesine’s comeback is proving to be much greater than its setback. Today, its alluring cinnamon hues continue to capture the hearts of gem enthusiasts, crystal healers, and gemologists alike.

Whether you’re looking to add a pop of red to your monochromatic look or pining for a crystal that eliminates all the bad vibes — andesine is a gem worthy of a spot in your crystal collection. 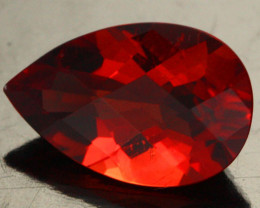 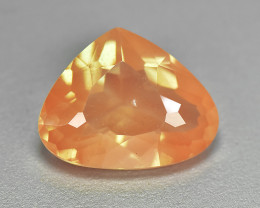 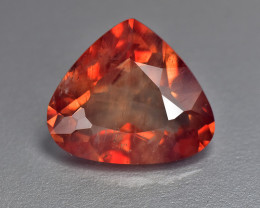 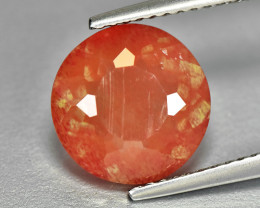 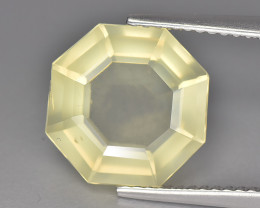