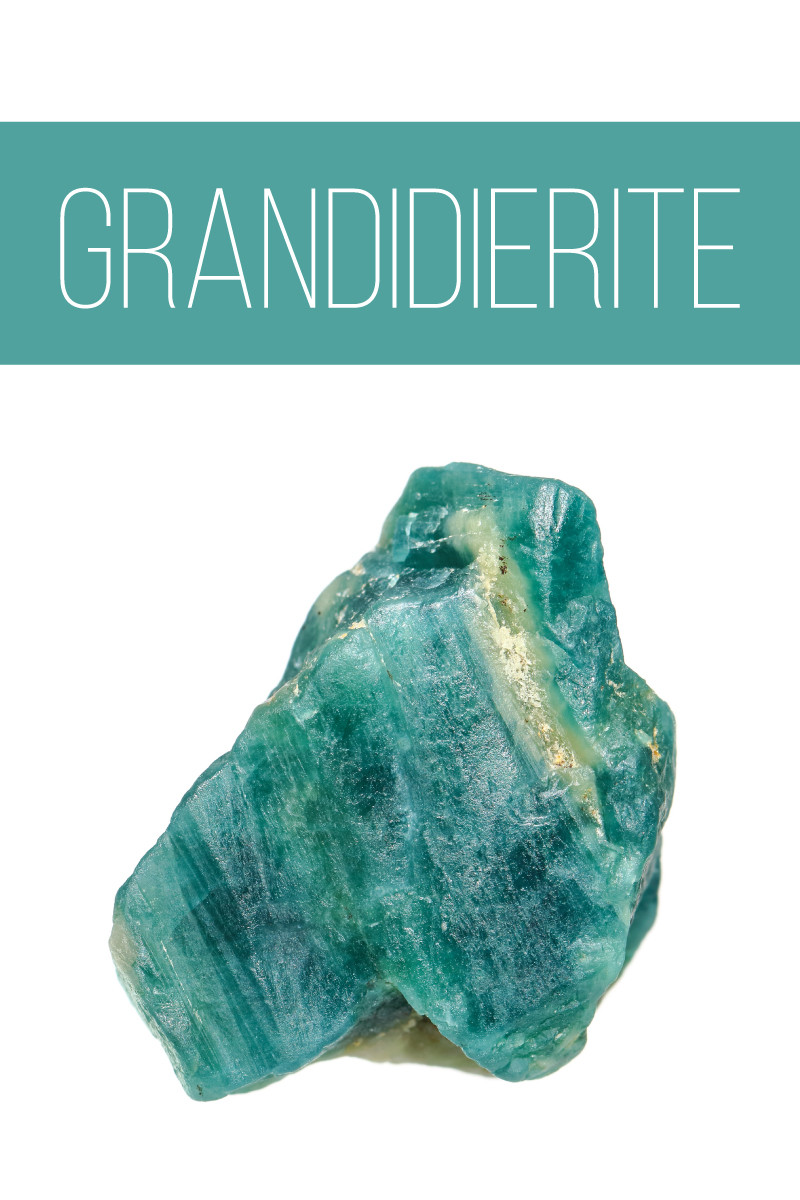 Grandidierite (gran-dih-dee-er-aite) is a rare aquamarine-blue to sea-green gemstone. It’s mostly known among collectors, more than everyday gem buyers. But one look at grandidierite will show you that it’s not a gem to pass over!

Just how rare is grandidierite? Extremely rare. To put it in perspective, the Gemological Institute of America (GIA) reported that, before summer 2015, gem-quality grandidierite crystals big enough to be faceted were “almost unheard of.”

Among the rarest gemstones in the world, grandidierite often makes top ten and even sometimes top five lists.

So, is grandidierite a good investment? What makes it unique? By the end of this guide, you’ll know all the answers you need to determine if grandidierite is a gem for you! 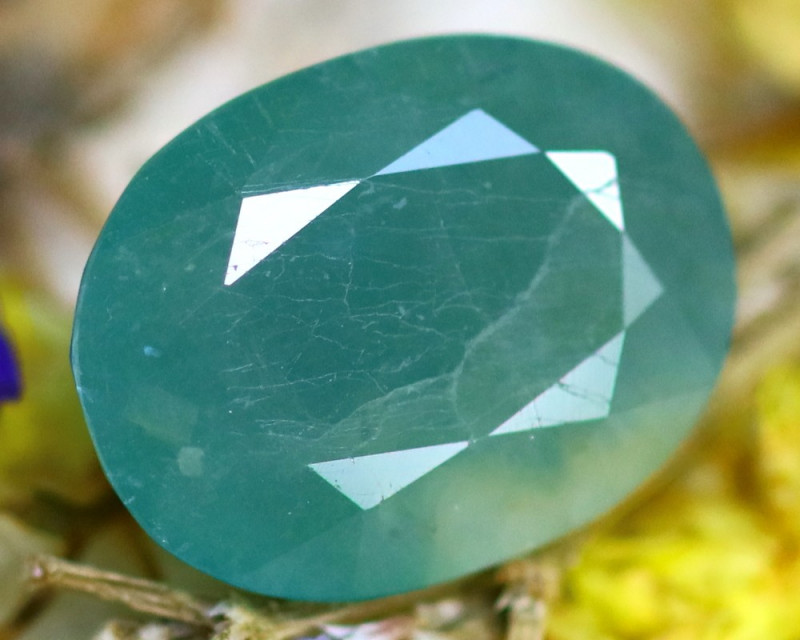 What Is The Gemstone Grandidierite?

Though it’s not a more affordable alternative, grandidierite can substitute zircon as a traditional December birthstone or aquamarine as a March birthstone. Grandidierite cabochons can also resemble jade, making them substitutable as an August birthstone as well.

The gem’s blue and green tones mean that grandidierite can be used as a zodiac stone for earth signs (Taurus, Virgo, and Capricorn) and air signs (Gemini, Libra, and Aquarius). 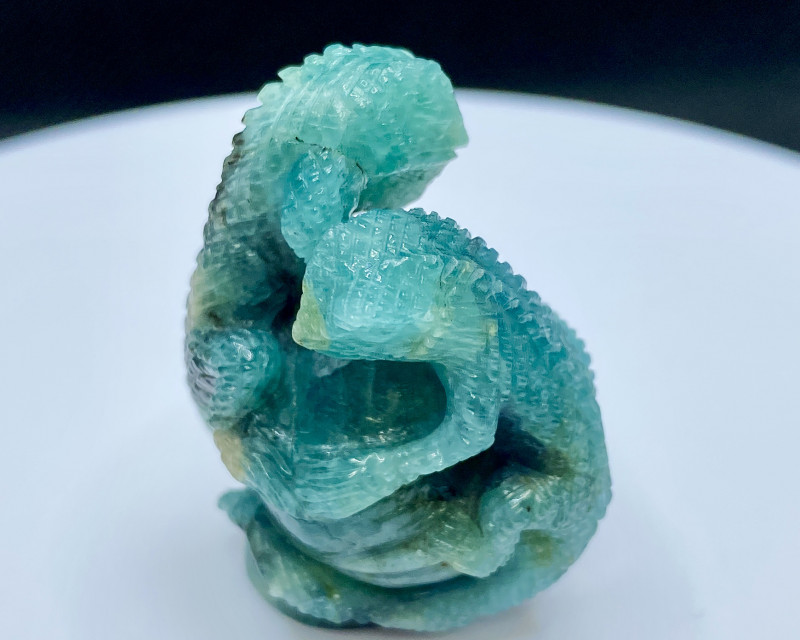 The (Mg,Fe) part of its composition accounts for the frequent presence of iron and manganese impurities. Other impurities include titanium, sodium, and potassium, but iron causes the characteristic blue-green hue.

Speaking of which, grandidierite’s color is the first key to its identification. The stone only occurs in shades of blue, green, or blue-green. The stone’s pleochroism (ability to display different colors from different viewing angles) is also a distinguishing feature.

However, lazulite has similar coloring and similar pleochroic colors. Grandidierite has a slightly higher Mohs hardness (lazulite is 5.5-6), but lazulite has a higher refractive index (1.60-1.66) and density (3.08-3.83).

Now that you know the mineralogy, it’s time to get into the symbolism and history of grandidierite! 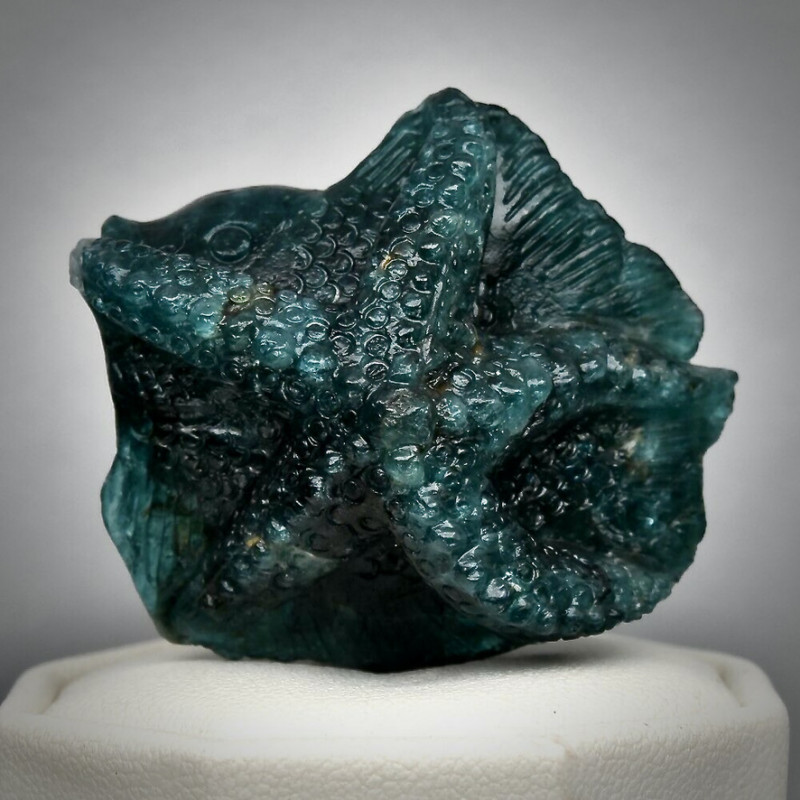 Though it’s been known for over 100 years, grandidierite is still considered a modern stone. Given its modern nature, not much folklore is associated with it. That said, some believe grandidierite symbolizes resilience, mental clarity, and self-confidence.

Grandidierite’s first official discovery occurred in Madagascar in 1902. French mineralogist and geologist Alfred Lacroix (no relation to the sparkling drink) discovered the stone and named it after another Alfred, the French explorer and naturalist Alfred Grandidier.

Honoring Grandidier for a Madagascar-based stone made sense, as Grandidier’s life work was a 38-volume encyclopedia of sorts on Madagascar’s geography and geological history. According to Cambridge History of Africa, this was the first detailed description of Madagascar.

After the Tranomaro discovery, gem dealer Brice Gobin collected around 20 grandidierite gems from the region, three of which were put on display in New York City. That said, the Tranomaro deposit has only produced around 300 carats of gem-quality material.

Moving on from the past, what is grandidierite good for now? 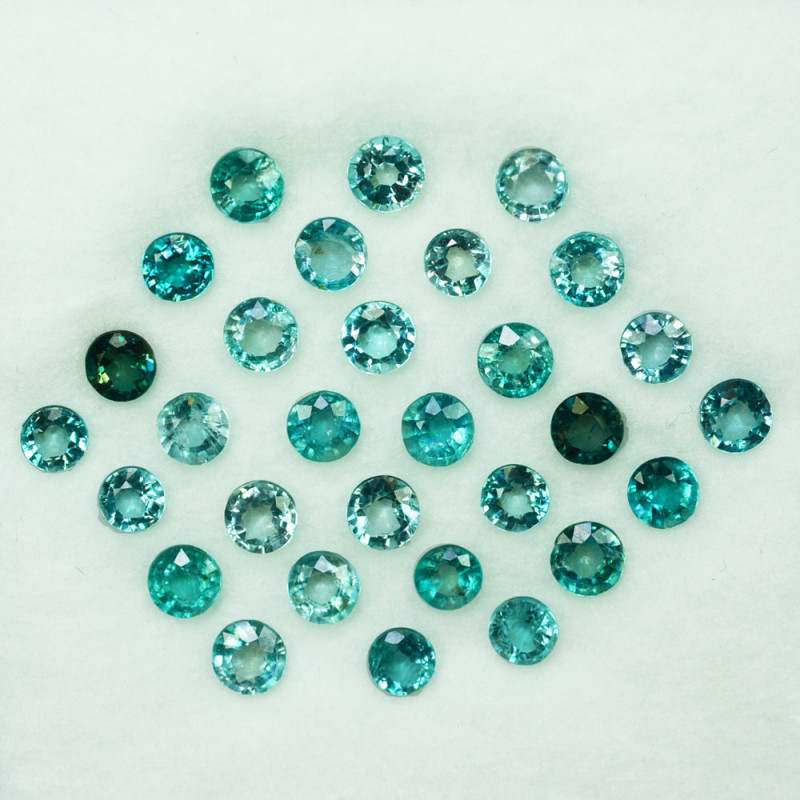 All gemstones can function as healing stones, with some of their powers tied to their coloring. Bluer grandidierite stones have the benefits of blue gemstones, like soothing emotions and raising intuition.

What about the physical, emotional, and chakra grandidierite benefits?

What about emotional healing?

Emotionally, grandidierite crystals are said to broaden your perspective and increase emotional resilience. They can also boost confidence, logical thinking, and relaxation.

The heart chakra governs love and acceptance. After using grandidierite to open it, feelings of detachment transform into self-love and compassion.

The throat chakra rules how you understand and communicate your truth. Blocked symptoms include shutting yourself off from others and social anxiety. Opening the chakra with grandidierite is helpful for self-expression and confidence, especially before giving a big speech or presentation!

Besides healing value, is grandidierite valuable as a gemstone? 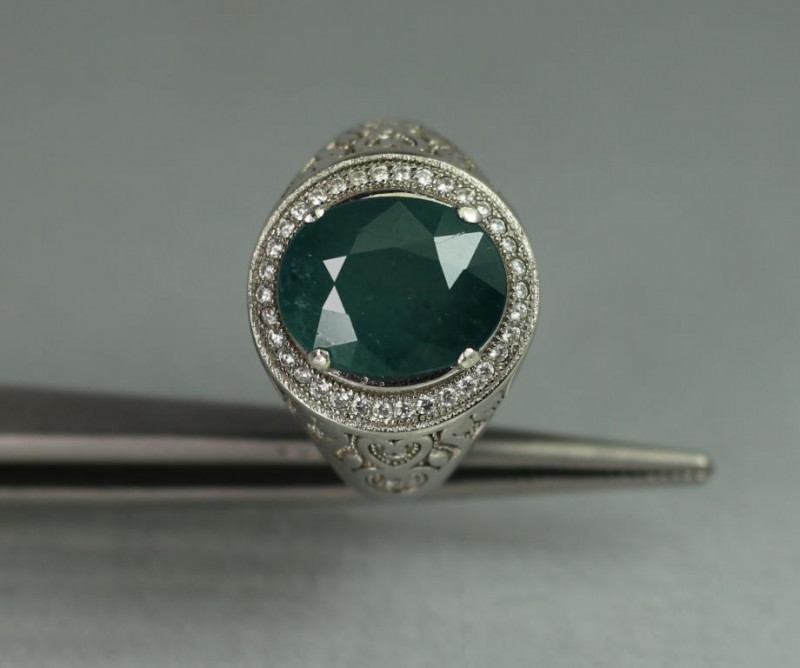 Grandidierite’s color is always blue, green, or a combination of these hues. The shade can vary from pale to dark, though saturated neon blues are most valuable.

The cause of grandidierite’s color is its frequent iron impurities. Higher iron content means richer tones.

Most high-quality grandidierite is faceted, often in round, oval, or octagonal shapes. The stone has strong dispersion (colorful sparkle), so faceted cuts display this quality best. Because of its birefringence, though, you may see a doubling of facets. 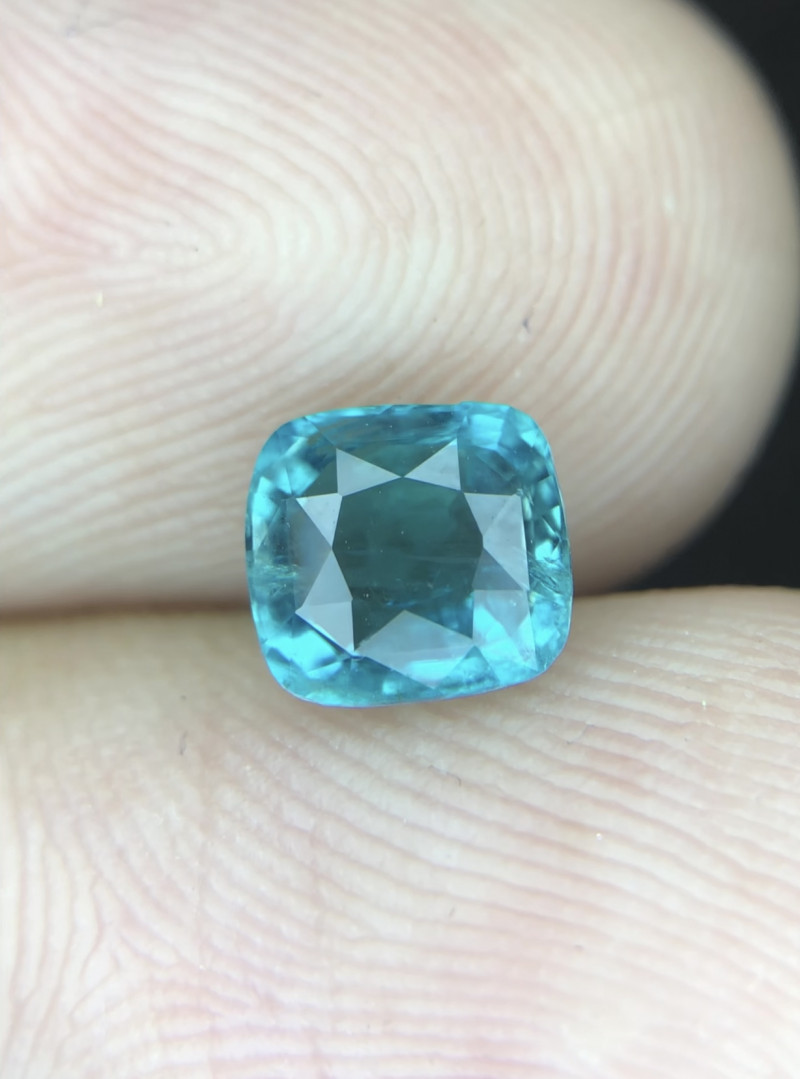 That said, some common inclusions in grandidierite are:

Most grandidierite gems are translucent, though opaque rough is most common. Because opaque grandidierite is less rare, it’s more affordable while transparent stones are most valuable.

Grandidierite cabochons can be 1-10 carats. Though the largest faceted specimen weighs 763.5 carats, most faceted grandidierites are under 5 carats. Madagascar has produced crystals as large as 8 cm (3.14 in) in length.

Grandidierite isn’t treated, but it can be manufactured. Usually, scientists create synthetic grandidierite for research — it’s not as common in jewelry.

Because of its rarity, some sneaky sellers may try to pass other stones off as grandidierite. These are called simulants or fake grandidierites.

Looking back at the real deal, how does natural grandidierite form? 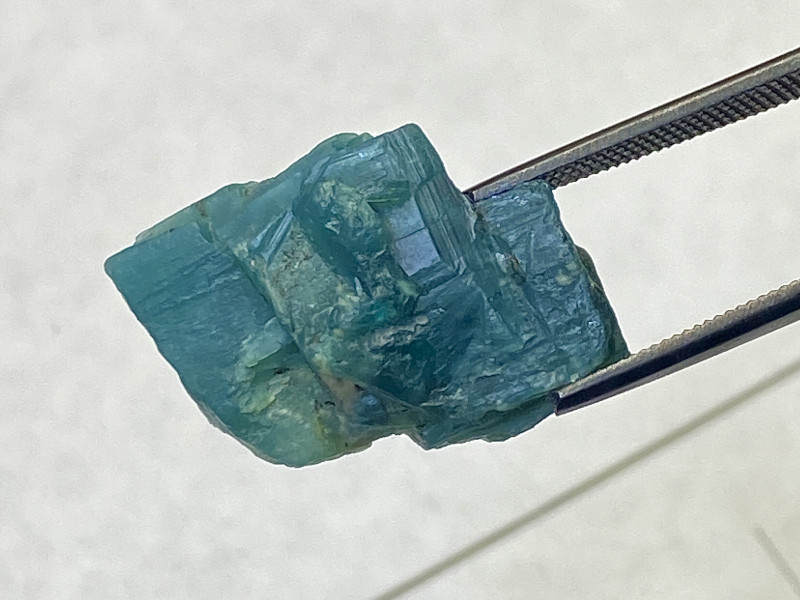 Raw grandidierite forms inside pegmatites. As the pegmatites form from cooling magma, crevices form inside from gas bubbles and different cooling rates. This allows for water containing melted mineral elements to seep into the crevices and harden into crystals.

Grandidierite crystals are found mostly in pegmatites but also in aplites, xenoliths, and gneisses.

Now, where does grandidierite come from?

Though Madagascar was the sole source for a long time, high-quality grandidierite has since been found in Sri Lanka.

While grandidierite has been found in these locales, no locations besides Madagascar have produced notable amounts of gem-quality grandidierite.

With that in mind, what is grandidierite worth? 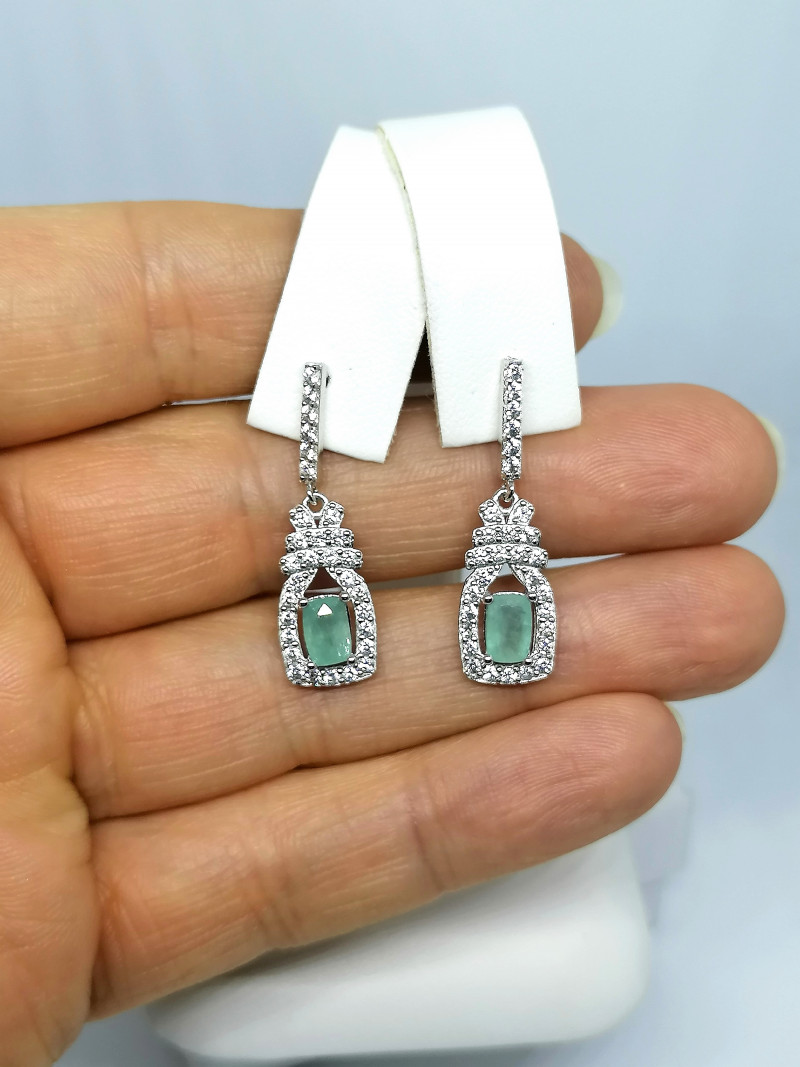 The most expensive and hard-to-come-by grandidierites for sale are transparent, saturated in color, and eye-clean. The first faceted, transparent grandidierite (sold in 2003) was only 0.29 carats and fetched $50,000 (around $172,000 per carat).

In general, the grandidierite price per carat for transparent to translucent faceted stones with good clarity is about $20,000-$26,000 per carat.

At wholesale, grandidierite cabochons are much more affordable, ranging from $5-$10 per carat, though some reach beyond $2,000 per carat. Carvings at wholesale start at $2 per carat.

With investment-level prices, proper gemstone care is of utmost importance.

Grandidierite stones are pretty durable, so any jewelry option is wearable. Because of their perfect cleavage, though, we recommend choosing grandidierite jewelry with protective settings.

Don’t wear grandidierite jewelry during intense activities, so you can avoid potential hard blows or fractures to the stone. To clean the stone, the standard soft toothbrush, mild soap, and warm water will do the trick. 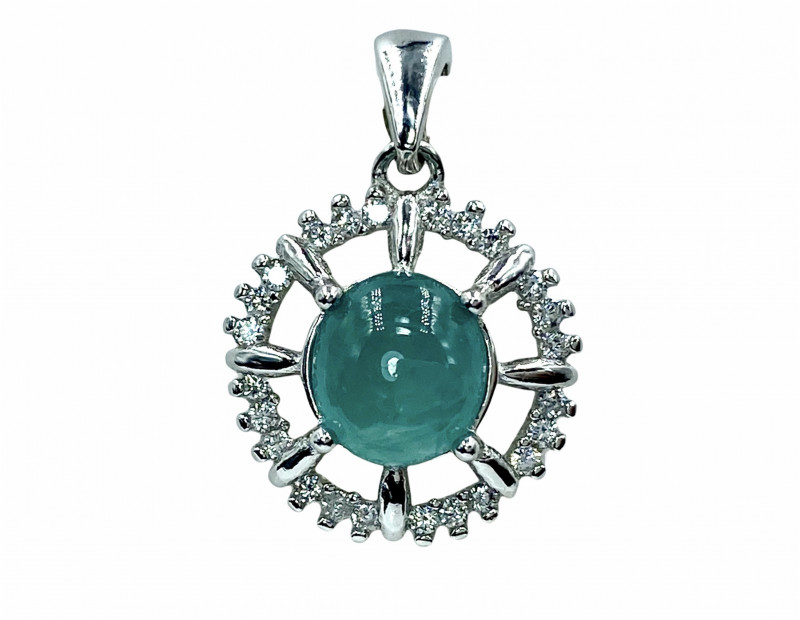 Grandidierite is a top-tier find for anyone who’s passionate about crystals or collecting rare gems. With every small deposit of grandidierite crystals depleting quickly, it’s surely a worthy investment.

If grandidierite is beyond your budget, some similar-looking alternatives are aquamarine, chalcedony, apatite, or spinel. You can also see some gorgeous grandidierite gems on display at Wilensky Gallery in New York City.

For those seeking these one-of-a-kind crystals, we have them available here at Gem Rock Auctions! 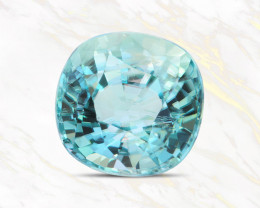