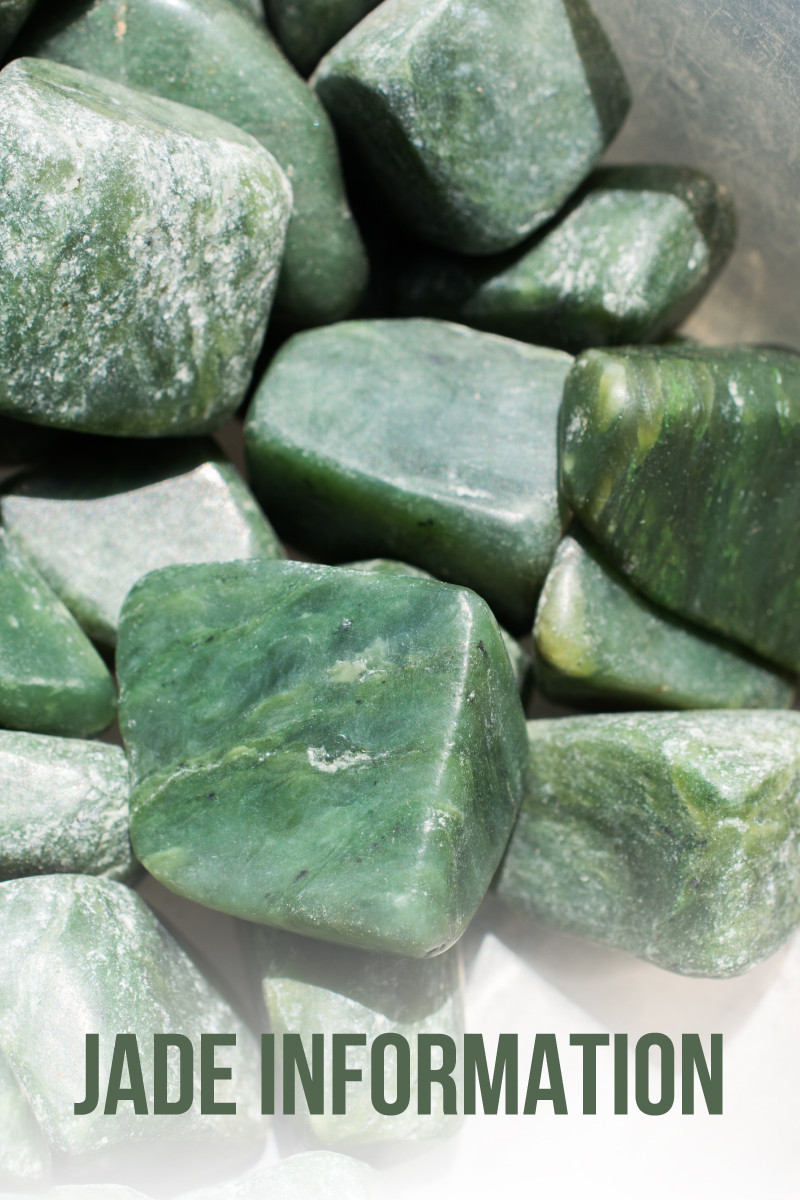 In need of a little luck? We’ve got the ultimate lucky charm: jade! Jade is a term that describes two different gemstones that look incredibly alike: jadeite and nephrite. Beloved for centuries, jade has a special place in many cultures worldwide.

Jade is mostly associated with China, but other places around the world have incorporated jade into their cultural sphere. In the US, both Wyoming and Alaska honor jade as their official state gemstone.

If you watched the 2008 Beijing Olympics, you may have noticed a sneaky hint of green on the medals. By adding jade to the first, second, and third-place medals, the Chinese government made history with the first gemstone-embellished Olympic medals!

There’s so much more to uncover about jade. But before we jump in, what is a jade stone?

Jade is a semi-precious gemstone brimming with radiant power. If you were born in March, you’re honored with a jade birthstone! Jade is the month’s mystical birthstone, emitting positive vibes for March’s sunny personalities.

Fancy astrology more? Jade is the zodiac stone for the two signs under Venus: Taurus and Libra. Both zodiac signs deeply appreciate beauty, so they’re sure to love some gorgeous jade jewelry!

Speaking of appreciation, jade is the traditional gemstone for the 12th wedding anniversary! What better gift to show your appreciation than the “Stone of the Heart” itself?

As you know, jade might mean jadeite or nephrite. Jadeite and nephrite are both metamorphic rocks made of small, interlocking crystals. Both stones have different hardness rankings and chemical compositions.

So, what is jade made of exactly?

Jade isn’t the hardest stone, but it is the toughest. While hardness refers to scratch resistance, toughness refers to a stone’s ability to handle mechanical shock, like a sharp blow. Why is jade the toughest? You can thank the stone’s interlocking crystals for that!

Below, we’ll outline the rest of jade’s properties, specifying between jadeite and nephrite when necessary. 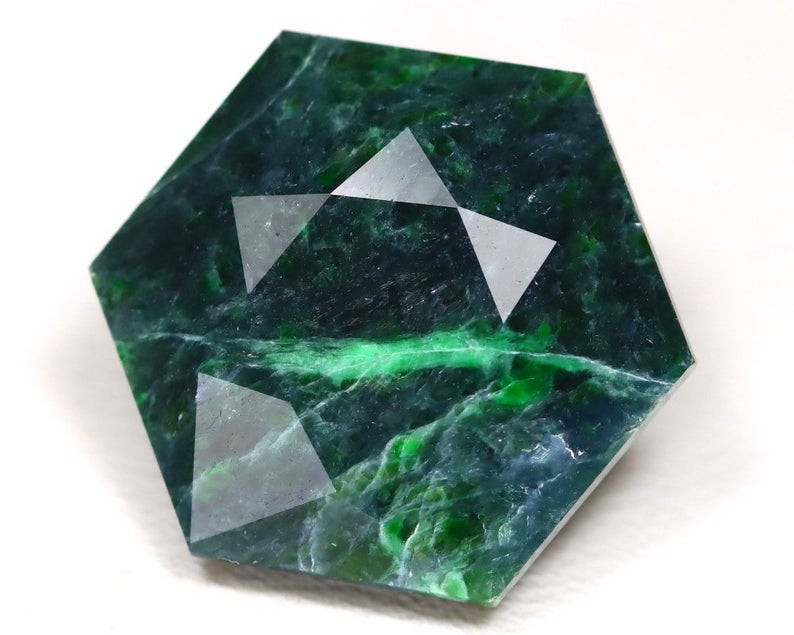 Science aside, what’s the story behind jade stone meaning?

Jade’s name comes from a Spanish phrase, piedra de ijada, meaning “stone for pain in the side.” But why?

During the 1500s, Spanish explorers in Central America saw indigenous folks using jade to cure kidney problems by holding the stone on their side. The Latin term, lapis nephriticus, also translates to “kidney stone.”

Symbolically, jade has come to represent wisdom, prosperity, and virtue. Some interpretations include serenity and love as well.

Ancient cultures applied their own meanings to jade. Ancient Mayans and Aztecs believed jade represented the cycle of life and death. Jade connected them to I’q, the breath spirit that serves as a portal to the spirit realm.

Chinese jade carvings all have distinct meanings, but two crucial ones are bi and cong. Bi is a circular disk with a hole in the center that symbolizes heaven. Bi’s counterpart, cong is a square vessel with a round interior that symbolizes earth.

One common thread among ancient cultures was the use of jade for longevity. Many believed a jade gem would grant them a longer life full of energy and strength.

Nowadays, what is jade used for?

Like other healing stones, jade emits energies that you can harness for different uses. Overall, jade promotes balance, hope, and healing, much like its fellow green gemstones.

In terms of specific healing properties, what does jade do?

Considering its etymology, it’s no surprise that jade can heal kidney problems. Other physical healing properties include strengthening the immune system and removing toxins from the blood.

Jade has rocked the skincare world as well, with jade facial rollers booming in popularity. Used by rolling over the face, jade’s ability to stay cool helps reduce redness, brighten the complexion, and enhance blood circulation.

Jade’s emotional healing properties center around your relationship to your body and the world around you. By bringing awareness to your physical and emotional states, jade can help you identify the source of your struggles. Jade’s wisdom will then guide you toward the solution.

Being more in-tune with yourself can increase self-love, giving you greater confidence as you share that love with others.

Jades are perfect for balancing the heart chakra. The heart chakra is where you give and receive love, along with finding the balance between body and spirit.

Jade can open the heart chakra, allowing you to feel nurtured and see the best in everyone, including yourself. A blocked heart chakra will leave you feeling emotionally repressed, scared, and indecisive.

Speaking of indecision, are you having trouble choosing just one jade stone? Read on to learn what to look for when shopping for jade! 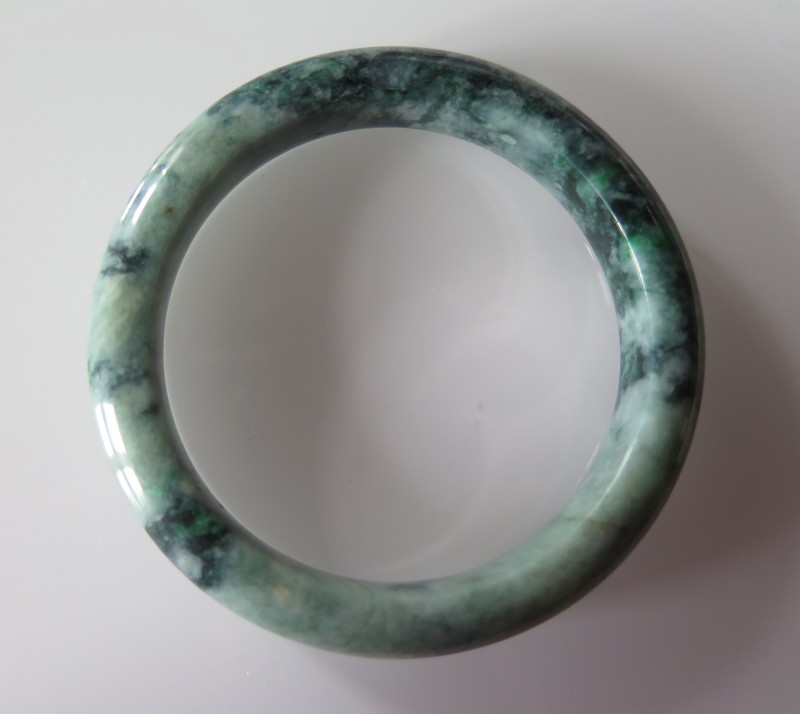 All gemstone values are dependent on a few traits, which may vary based on the stone. In jade’s case, the key properties to look at are the stone’s cut, color, clarity, carat weight, and treatment.

Jade’s toughness lends the stone to virtually any cut. The highest-quality jade specimens typically become cabochons or faceted jewelry so as to not waste material.

Sometimes, a lapidarist will use an entire piece of jade rough to create hololith rings or bracelets, but the amount of jade wasted while cutting hololiths makes these pieces very expensive.

Both jadeite and nephrite come in multiple shades of green, from apple-green to the coveted emerald hue, “Imperial Jade.” The coloration on both stones is usually streaked or mottled, creating an illusion of swirling textures.

Jadeite comes in more colors than nephrite, however. Besides green, jadeite may be yellow, red-orange, lavender, pink, blue, black, brown, or gray. In other words: virtually any color you can wish for.

The key difference? Nephrite’s colors are more muted than jadeite’s. 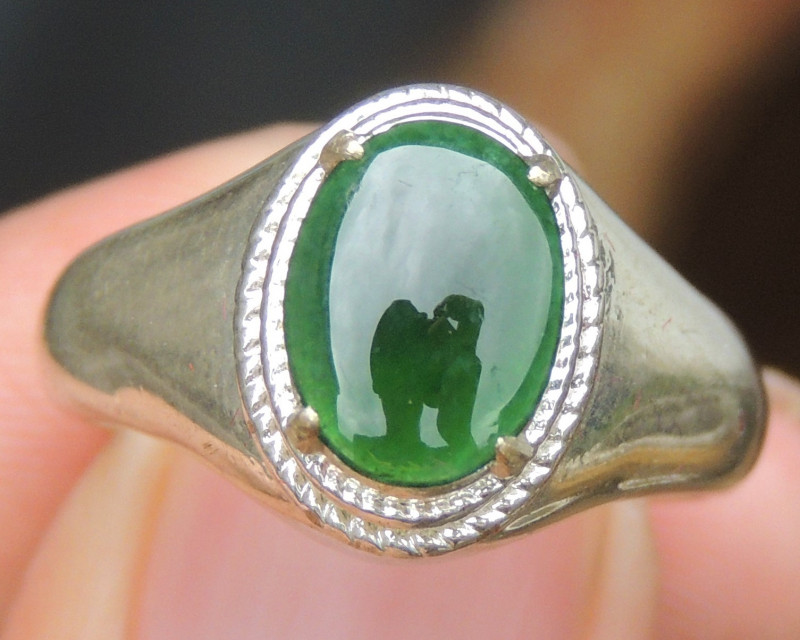 A stone’s clarity grade is based on its inclusions. Jade doesn’t fall under a specific clarity grade, but jade crystals with inclusions are more common and therefore less valuable than those without.

The size of jade’s microscopic, interlocking crystals can affect its texture. The three crystal grain sizes for jade include fine, medium, and coarse. Fine-grained jade has the smoothest texture and the most attractive luster.

Carat weight can drastically change the value of a jade crystal, particularly jadeite. Natural jadeite heavier than a few carats is very rare, so the price per carat will dramatically increase in larger sizes.

You may wonder if your jade is real or imitation jade. Imitation jade isn’t common but treated jade is. Jade may be dyed, bleached, impregnated, coated, or heated for various reasons.

Jade treatments involving dye, bleach, or heat usually give the stone better coloring. For instance, if a jade stone shows shades of brown, jewelers may bleach the stone in acid.

Impregnating or coating jade gives the gem an extra layer of protection against breakage. Typically, jade that has been dyed or bleached is more fragile, so impregnating the stone with a polymer helps prevent fractures.

Chinese jade treatments are so common, they came up with a 3-tier grading system to categorize how enhanced the stone is. Grade A jadeite is highest, referring to untreated gems that may only have a coating. Grade C jadeite refers to gems that have been dyed and impregnated.

Jade treatments in China actually date back to the 13th century, but jade’s history goes even further back. 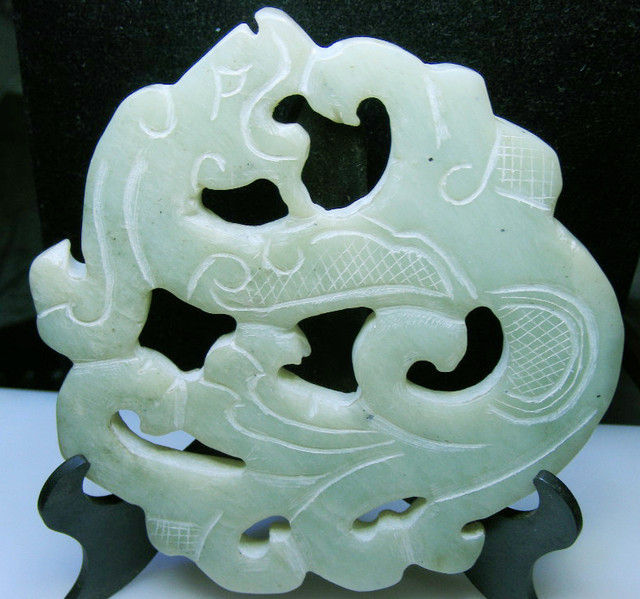 Jade’s history began over 7,000 years ago when various societies carved weapons and tools from jade stone. The stone’s cultural significance was most prominent in East Asia and Central America.

The Chinese character for jade, Yu, goes back to roughly 2000 BC. In Neolithic China, jade had a multitude of spiritual associations. Jade objects represented the connection between nature and heaven, often portrayed with divine animals like dragons or tortoises.

When the Zhou Dynasty began, the Chinese jade definition shifted from spiritual to social power and authority. One example is the use of jade burial suits, ceremonial shrouds made of thousands of jade pieces that were reserved for Han Dynasty royalty.

Perhaps the most famous jade connoisseur was Emperor Qianlong. During his 18th-century reign, the emperor collected an enormous amount of jade, even composing fervent poems about the stone.

In more modern times, French mineralogist Alexis Damour made his mark on jade’s history in 1863 by discovering that jadeite and nephrite were chemically different.

Since the advancements that led to Damour’s discovery, scientists have been able to uncover how jadeite and nephrite form.

Jadeite and nephrite both form inside metamorphic rocks but under different circumstances. Jadeite requires heat and high pressure deep underground, only emerging from erosion or earthquakes.

Once it forms, where can you find jade? 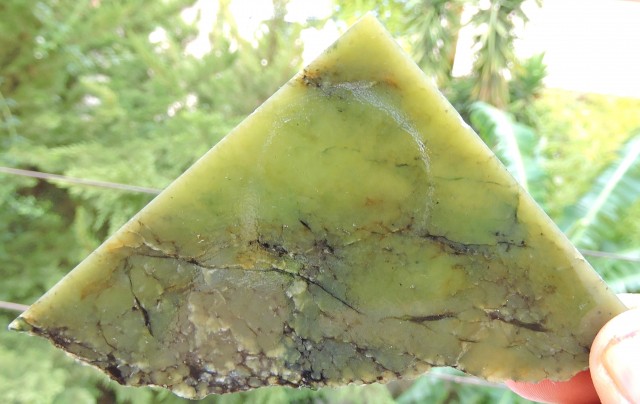 By far, the most abundant source of jade is Myanmar. Most sources estimate at least 70 percent of the world’s jade comes from Myanmar. The nation is also the only producer of Imperial Jade.

Interestingly, while jade is a Chinese staple, China only produces nephrite, not jadeite.

Smaller jade mines have popped up over time, some producing jadeite and nephrite while others only produce one or the other. These mines include:

Regardless of the source, jade can be a lifelong companion wherever you go —  as long as you take care of it!

You can clean your jade stones with a soft cloth and warm, soapy water. If your stone is untreated, you can use steam or ultrasonic devices to clean it.

Unsure if your stone is treated or not? Stick with soapy water to be safe. Be sure to avoid harsh chemicals to preserve the stone’s color and texture.

Both jadeite and nephrite are very tough gems, so they’re unlikely to break. However, both stones can be scratched by harder stones like topaz and quartz, so it’s best to store your jade stones separately from other gemstones. 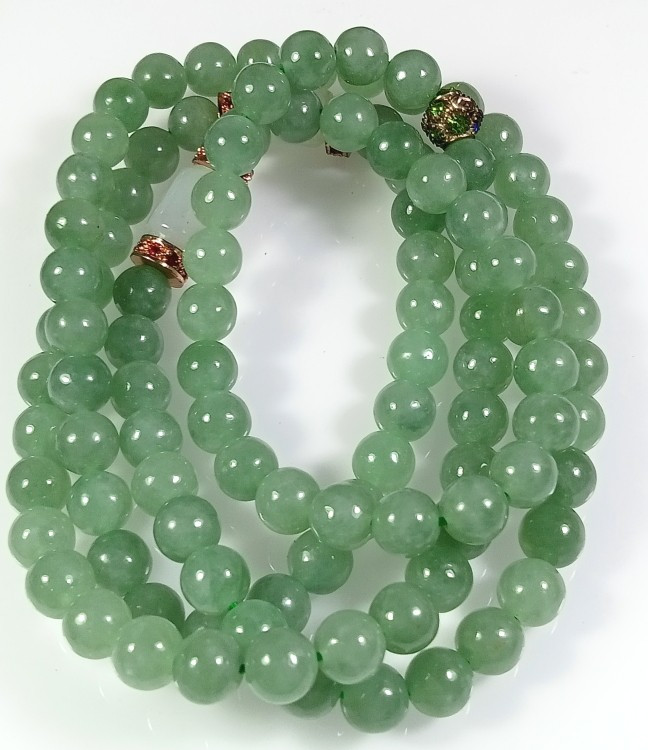 Jade’s price largely depends on whether we’re talking about jadeite or nephrite. Nephrite is a popular gem, but jadeite is much rarer and commands higher prices.

For further reference, more saturated colors will have higher prices than muted tones. Semi-transparent jade is the most valuable in terms of transparency.

Pro tip: Prices for jade often increase during Chinese holidays. For the best deal, avoid buying jade around these times of the year.

Get Your Own Jewel of Heaven!

Now that you know all about the incredible jade jewel, it’s easy to see why this stone is beloved far and wide.

At surface level, jade may seem like just another pretty green stone. But underneath, jade is full of light and love that has touched hearts for centuries.

Hopefully, jade reminds you that regardless of the flaws you might see in yourself, you still have light worth sharing with the world.

As the Chinese proverb goes: “A speck on a jade stone won't obscure its radiance.” 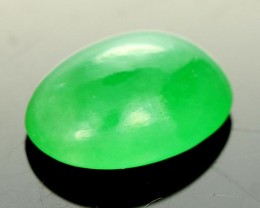