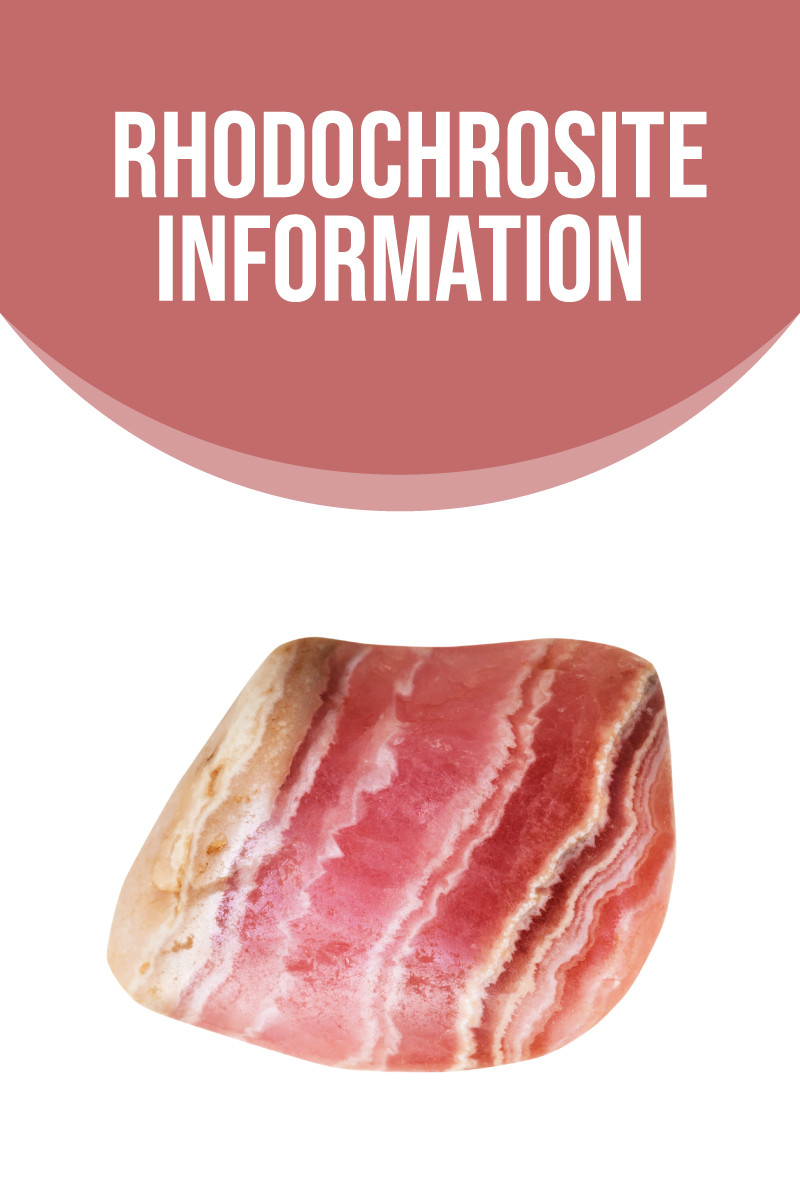 Are you looking for love and healing? Then let us introduce your new companion: rhodochrosite! Rhodochrosite is a pinkish-red mineral usually found with alternating white and pink banding. This rose-colored gemstone is known for its ability to help us see the best in ourselves and share it with the world.

While all gems have nicknames, the moniker “Inca Rose” is just as popular as rhodochrosite’s actual name. Even outside South America, rhodochrosite often goes by “Rosinca” or “Rosa del Inca.” The country played a significant role in rhodochrosite’s discovery, and the stone serves as Argentina’s (unofficial) national gemstone.

Rhodochrosite is also honored in the United States. Some of the most exclusive and gorgeous rhodochrosite specimens come from Colorado, including the largest one in the world, “Alma King.” Because of the state’s abundant supply, rhodochrosite became the official state mineral.

Rhodochrosite is a popular type of gemstone all about tender love and care. Connected to the planet Venus, the stone’s beauty and warm energies are equal to the love goddess herself.

If you’re a Scorpio, rhodochrosite is your personal zodiac stone! Scorpios are ruled by Venus’s counterpart, Mars. Since Mars is all about action and Venus is more about values, Scorpios can utilize rhodochrosite crystals to ensure their actions are motivated by empathy over impulse.

Summer babies get to enjoy rhodochrosite, too! The stone serves as a zodiac stone for Leo as well. Those born under Leo have a spirit of playfulness and generosity. However, their childlike wonder may be overshadowed by pain or loss. Rhodochrosite can help by healing wounds and bringing back joy.

Looking for birthday gift ideas? Rhodochrosite is the birthstone for October and November babies. Getting matching rhodochrosite rings with your Leo or Scorpio friends is a great way to show them you care and feel connected!

Rhodochrosite is part of the calcite subgroup of carbonate minerals. The stone is made of manganese, carbon, and oxygen, but the composition varies from stone to stone. Calcium, magnesium, and zinc are some elements commonly present in rhodochrosite stones.

In terms of durability, rhodochrosite is a delicate gemstone, ranking at a low 3-4 on the Mohs scale of mineral hardness. With this ranking, rhodochrosite easily scratches and breaks when hit or dropped.

Rhodochrosite comes in two varieties: the abundant color-banded variety and the much rarer solid-colored, translucent variety.

Banded rhodochrosite looks similar to agate or malachite’s banding, with white and pink stripes or concentric circles. This form of rhodochrosite is typically opaque but sometimes translucent. The much rarer translucent variety has great clarity but is rarely faceted because of its fragility.

One stone you might think is a rhodochrosite variety, although it’s not, is rhodonite. 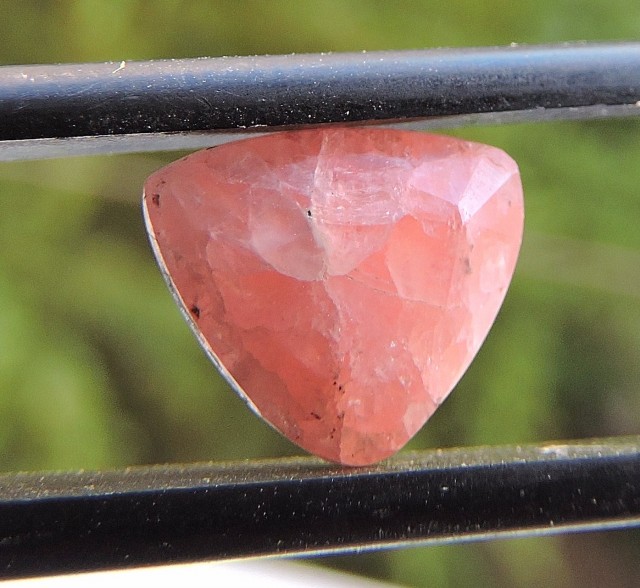 While rhodochrosite is similar to rhodonite in color and name, they are distinct stones.

Rhodonite is much more durable than rhodochrosite, with a Mohs hardness of 5.5 to 6.5 instead of rhodochrosite’s ranking at 3.5 to 4. Both stones have different textures, and rhodonite crystals are triclinic instead of trigonal.

We’ve laid out the rest of rhodochrosite’s mineral properties below!

The name “rhodochrosite” comes from two Greek words: rhodos for “rose” and khros for “color.” Together, the two terms mean “rose-colored,” for the stone’s raspberry hues.

As a pink gemstone, rhodochrosite joins similar stones like rose quartz in emitting energies of unconditional love. The love rhodochrosite brings out applies to all relationships, be it romance, friendship, or family.

The value of family is another area where rhodochrosite shines. Some call this gem the “Stone of the Compassionate Heart” as it reminds us to feel empathy for the child within us all, including our own inner child.

In a more literal sense, rhodochrosite can symbolize maturity and healing for children. For this reason, many people use the stone to ease family life transitions like moving or divorce.

Beyond family, this all-loving jewel represents forgiveness and new love. When we’ve been hurt, we may find it difficult to let go of anger and allow ourselves to move forward. Similarly, when we’ve hurt others, guilt can consume our thoughts and prevent growth.

Rhodochrosite symbolizes forgiving others in the sense that we relinquish their power over our emotions. More importantly, the stone reminds us of the power of self-forgiveness. By evoking energies of hope and joy, rhodochrosite is a powerful tool for acceptance and emotional progress.

If you’re hoping to make some emotional progress, you can utilize the many powerful rhodochrosite metaphysical properties. 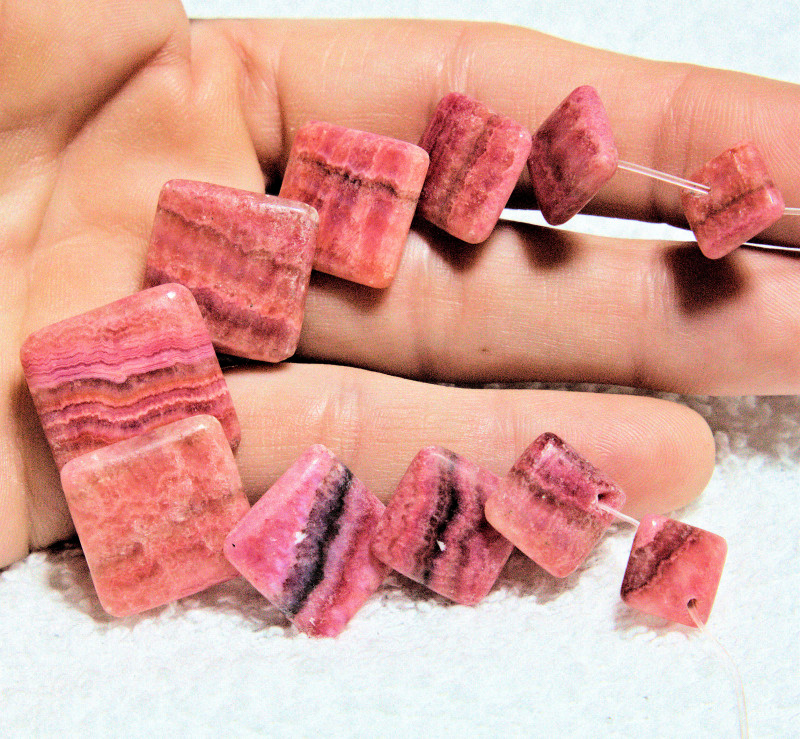 All crystals emit energies that vibrate with our own, making them great crystal healing aids. Rhodochrosite is no different!

Rhodochrosite uses for emotional healing are abundant. The soft stone supports you through the entire process, starting with reducing stress to allow for grounding.

From there, rhodochrosite can open your heart and mind, allowing you to take an honest look at past heartaches. With a broader perspective, you can reflect and identify self-destructive behaviors to overcome.

After a rhodochrosite healing session, the stone may encourage an optimistic outlook toward the future. The confidence this dynamic gem inspires will help you embrace your best self and see the best in others.

Looking for chakra energy healing? Rhodochrosite is a great balancer for the solar plexus chakra!

The solar plexus chakra is at our navel and serves as the center of self-discovery. When this chakra is blocked, we’re like boats without rudders or maps. We feel confused, detached, and directionless.

Rhodochrosite can open the solar plexus, bringing back our sense of self and encouraging confidence in our unique strengths.

Moving from healing properties, rhodochrosite properties as a gemstone are important to know when you’re choosing the best one for your needs.

All gemstones have varying values based on meeting certain criteria. Experts grade these factors to give consumers a clear idea of what a stone is worth.

You don’t need to be an expert to know the general signs of a gem’s quality, however. For rhodochrosite, the value factors include the stone’s color, clarity, and cut.

Rhodochrosite’s color, like many other gems, can change based on varying amounts of inclusions within the stone. The manganese in rhodochrosite is often replaced in part by calcium, magnesium, or zinc, which can make the pink hues lighter.

While pure rhodochrosite looks raspberry red to pink, not all gems mined show these shades. Some rhodochrosite stones display hues of yellow, yellowish-gray, or brown. 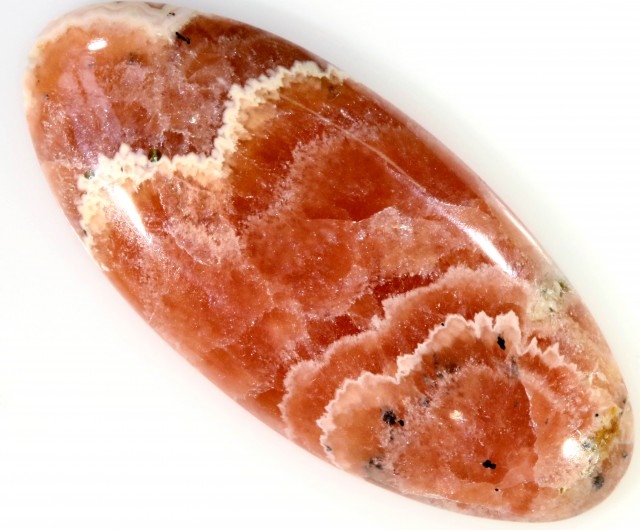 When grading a gemstone’s clarity, inclusions are the key factor. Ideally, a gem would have no inclusions (or at least no visible ones). For colored gemstones, inclusions typically provide their color, so a more general grading system applies.

Based on the colored gemstone clarity grades, translucent rhodochrosite specimens fall under Type II clarity. Type II stones usually have some inclusions, but not many visible inclusions.

Most specimens of rhodochrosite are not cut for faceting. While faceted rhodochrosite jewelry is available, these pieces are rare. Besides the rarity of gem-quality rhodochrosite, the stone’s fragility and cleavage make it difficult to cut.

Jewelers may turn opaque specimens with particularly attractive color banding into organic-looking rhodochrosite jewelry. However, most rhodochrosite is cut or carved for decorative purposes.

On that topic, what other purposes did rhodochrosite serve throughout its history?

The first time rhodochrosite received official mineral status was in 1813 when Johann Hausmann described a sample from modern-day Romania. However, many stories place rhodochrosite’s discovery back in the Middle Ages.

According to legend, rhodochrosite’s story began in present-day Argentina during the 1200s. At that time, the Inca Empire flourished. The ruler Inca Ripac was purportedly the first to discover rhodochrosite.

The Inca called the gem “Inca Rose.” The cultural belief was that rhodochrosite’s pinkish-red color came from former kings and queens, whose blood had transformed into the stone. 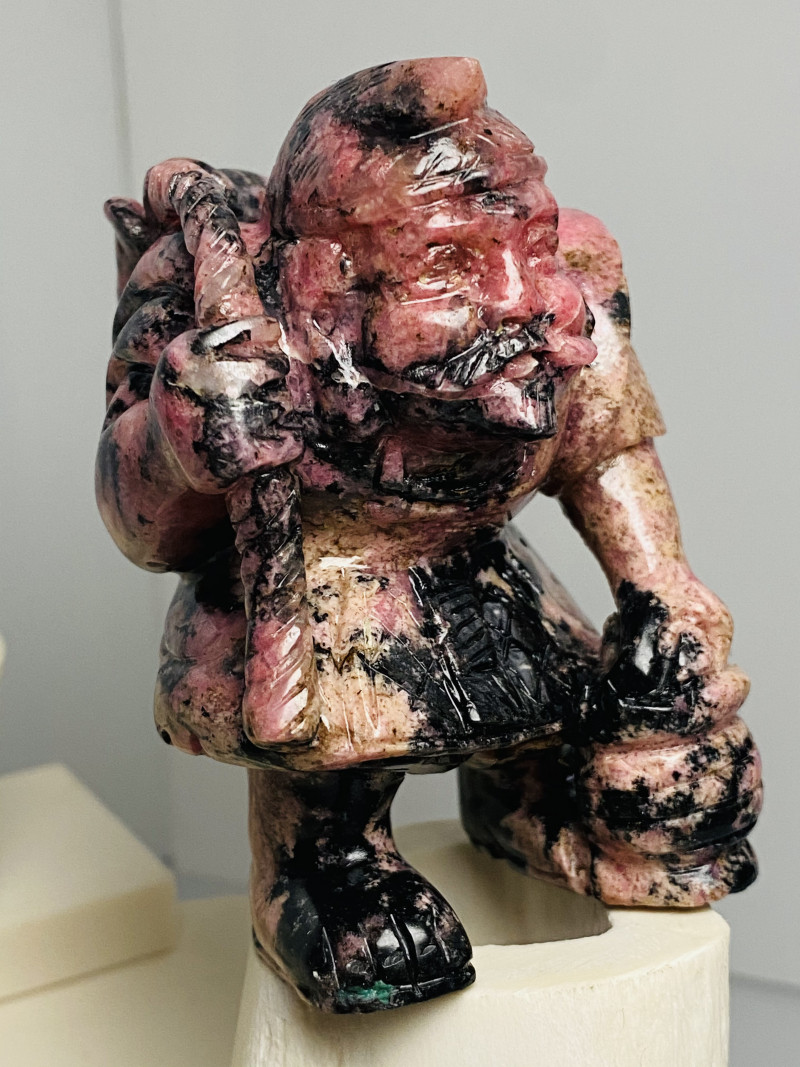 Another indigenous myth surrounding rhodochrosite is the “Petals of Rhodochrosite” story.

The story goes that a warrior, Tupac Canqui, disobeyed tradition by going into the temple of the acllas, a group of virgin priestesses. He and a priestess fell in love but fled to avoid punishment.

The two had a family and built a life together, but a curse sent down from imperial shamans led to both of their deaths. Later, an Inca man found the priestess’s tomb with a rhodochrosite stone on top.

The stone bloomed with blood-dripping flowers, so the man brought one of the flowers to the king. The king, overcome with emotion, posthumously absolved the lovers’ crimes.

If you know your history, you know the Inca Empire eventually fell, and along with it, their rhodochrosite mines. For the next few centuries, many mineralogists believe the mine abandonment allowed massive rhodochrosite specimens to form underground untouched.

While Hausmann’s 1813 sample was far from South America, another German geologist named Franz Mansfeld rediscovered the legendary Inca Rose in the 1930s. Inside the Buenos Aires mine, Mansfeld found an Inca tomb and roughly 10,000 pounds of rhodochrosite!

Rhodochrosite can grow in a few different ways. Most commonly, rhodochrosite forms in the hydrothermal veins of silver mines. Typically, other manganese minerals are present in these deposits as well.

Another formation process for rhodochrosite happens in caves or crevices underground. Groundwater breaks down manganese, the solution mixes with a carbonate material and then hardens to form stalactites or stalagmites.

Once it forms, where is rhodochrosite found?

The finest specimens of rhodochrosite only form in a few locations: Colorado, Romania, and Argentina. Banded rhodochrosite almost exclusively comes from Capillitas, Argentina.

Numerous other locales produce rhodochrosite, including: 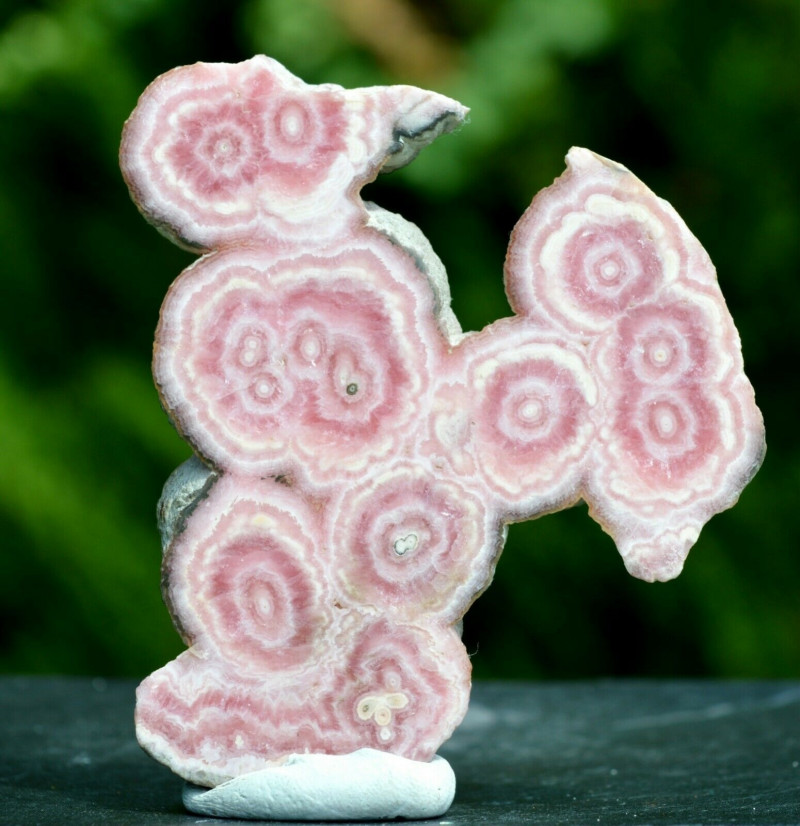 Rhodochrosite is a fairly rare stone, so many specimens are more costly. Color plays the largest role in rhodochrosite price, followed by clarity for the transparent variety.

The highest-value rhodochrosite stones are the translucent or transparent, medium red specimens. Unlike most stones, where the deepest colors are most expensive, rhodochrosite with medium shades of pink or red takes the cake.

Light pink shades of gemstone-quality rhodochrosite can be around $200-$250 per carat, while medium pink or red shades are typically around $350 per carat. Medium shades of red-orange are more valuable, at $400-$450 per carat.

The banded pink and white varieties are much more affordable. Of course, the stones with only pinks and reds (rather than yellows or browns) are more desirable and will command higher prices. If the stone is carved, the level of craftsmanship will affect the price as well.

Most banded rhodochrosite gems are between $1-$5 per carat when tumbled and polished.

Whether you’re investing in a rare rhodochrosite jewel or adding a cabochon to your collection, proper gemstone care is crucial for keeping the stone intact and effective.

Rhodochrosite’s fragility means you have to take extra caution when cleaning it. Even dust can potentially leave scratches, so it’s best to clean it while wet.

Simply rinse the stone’s surface, then very gently wipe the surface with a soft, clean cloth. Rinse the stone again and leave it out to air dry.

To avoid cracks or breakage, avoid wearing rhodochrosite jewelry during activities like playing sports, cleaning, or doing manual labor. Storing the stone separately from other gemstones is paramount, as most gemstones will scratch rhodochrosite’s surface.

With that, you have everything you need to know about rhodochrosite! With this stunning gem’s array of history and spiritual properties, it’s easy to fall in love with it. Better yet, use rhodochrosite to attract new love!

If you’re searching for a unique pink gem with gentle vibrations, take a look at our rhodochrosite jewelry for sale. We’re confident you’ll find the perfect piece for you! 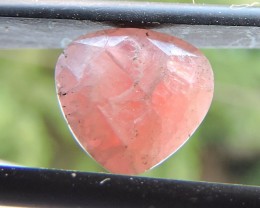