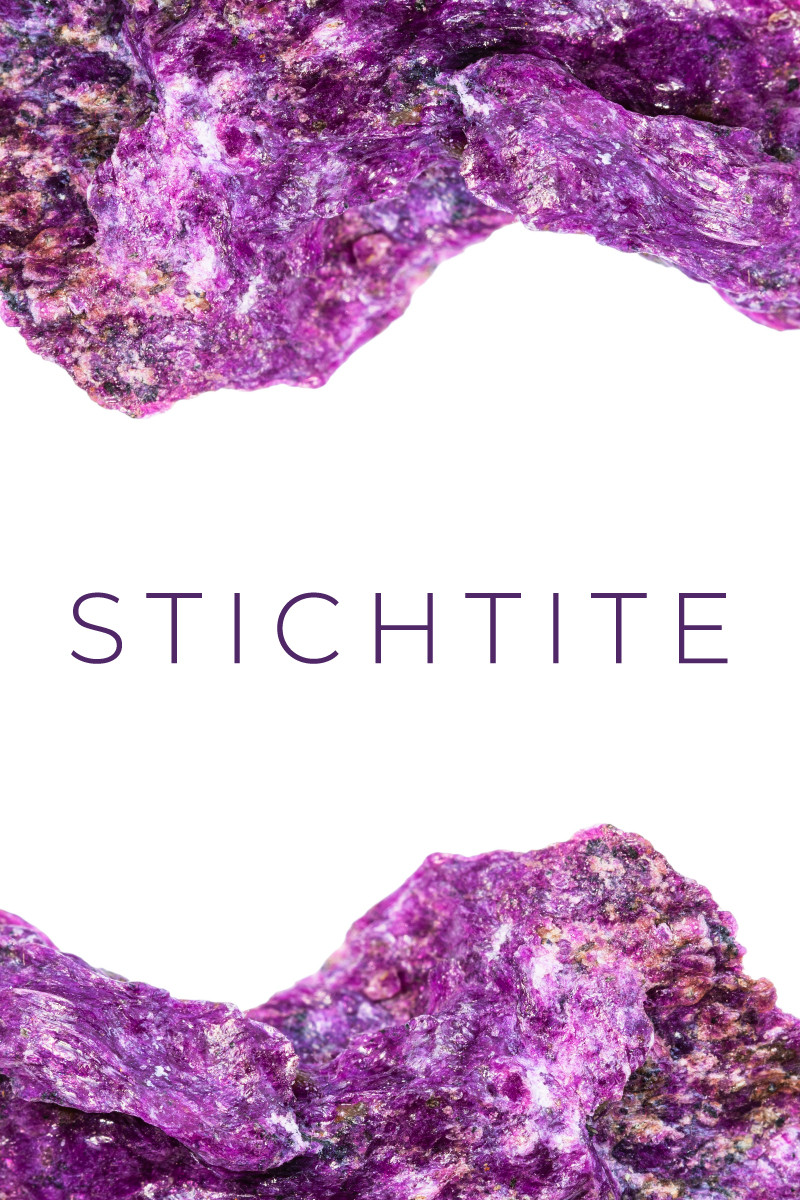 Stichtite is a soft, pink to lilac or purple gemstone. Most often, you’ll see stichtite in serpentine, creating a green, black, and pink to purple stone commonly sold under the trade name “Atlantisite.”

Stichtite joins the bright red gemstone crocoite, another rare find, as the main gemstones found in Tasmania. Both Australian gemstones are rare.

This guide will teach you all about stichtite gemstones, from their properties and prices to history and healing powers. 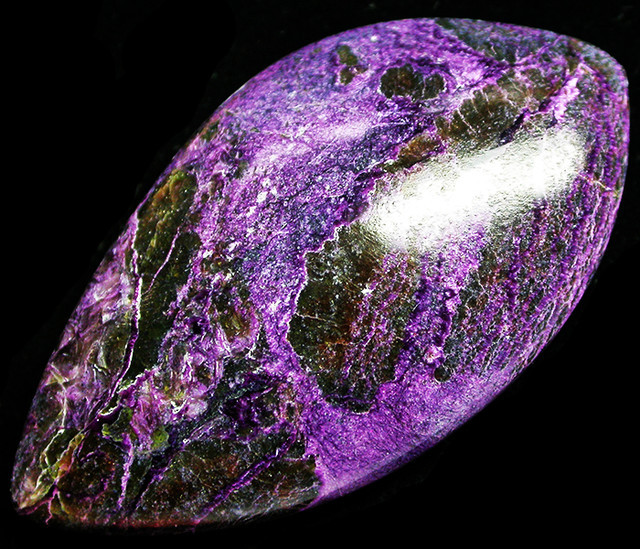 Stichtite is a semi-precious gemstone found in pink to purple hues. Purple is a rare color for natural gemstones (though red is the rarest). Though not a traditional birthstone, stichtite is a zodiac stone for Virgo and vibrates with the number 5 in numerology.

One alternate name for stichtite is chrom-brugnatellite, an incorrect name given by German mineralogist Laura Hezner in 1912 before further analysis was done.

Another nickname for stichtite from Tasmania specifically is Tasmanite. However, this name is more often applied to a sedimentary rock containing an algae called Tasmanites or a reddish-brown, translucent material resembling amber.

Back to the stone at hand, let’s get into what sets stichtite apart as a mineral.

Stichtite is a hydrated chromium magnesium carbonate mineral. The mineral’s formula may be written as Mg6Cr3+2(OH)16[CO3]·4H2O or Mg6Cr2(CO3)(OH)16·4H2O. Iron is a common impurity. Stichtite is often found mixed with chromite, serpentine, or both.

The stichtite mineral itself is very soft, only slightly harder than talc. Like talc, it feels greasy to touch. However, stichtite has a flexible but inelastic tenacity (a measure of mineral resistance to stress or pressure), meaning it can be bent but stays in the new, bent form afterwards. In contrast, talc has a sectile tenacity, so it will break off into thin sheets or flakes.

In terms of its crystal habit, stichtite minerals typically form as massive aggregates of plates or fibers. It can also form as compact masses. This is unusual for carbonate minerals, which mostly occur as well-formed crystals.

Listed below are stichtite’s mineral properties: 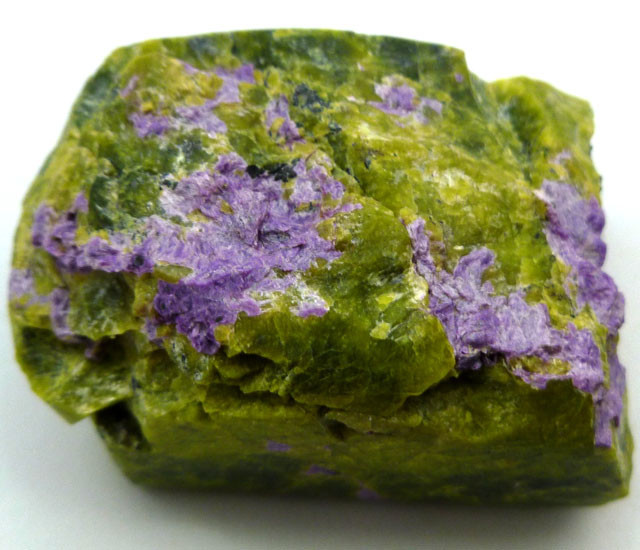 Pictured above: Stichtite in serpentine (Atlantisite)

The primary type of stichtite is a rock containing stichtite and serpentine. Mineralogists usually just call this rock “stichtite in serpentine,” but a well-known trade name is “Atlantisite.”

It should be noted that the trade name “Atlantisite” is registered to Gerald Pauley for material from Stichtite Hill in Tasmania.

What does Atlantisite look like? Overall, the stone’s dominant hues are green (from serpentine) and purple (from stichtite). The shade of green varies from pastel to dark ivy, and the often-dark purple may appear as veins, knots, or spots. Usually, chromite and magnetite are also present, adding black to the mix.

Another lesser-known type is Bouazzerite, a term used by Tasmanian miners for iron-rich stichtite. However, “bouazzerite” also refers to a different green mineral with the formula Bi6(Mg,Co)11Fe3+14(AsO4)18(OH)4O12·86H2O.

Stichtite can be easily confused with purpurite, sugilite, and charoite. In fact, those three gems are commonly mixed up with each other. But besides being purple, each gem is completely different. 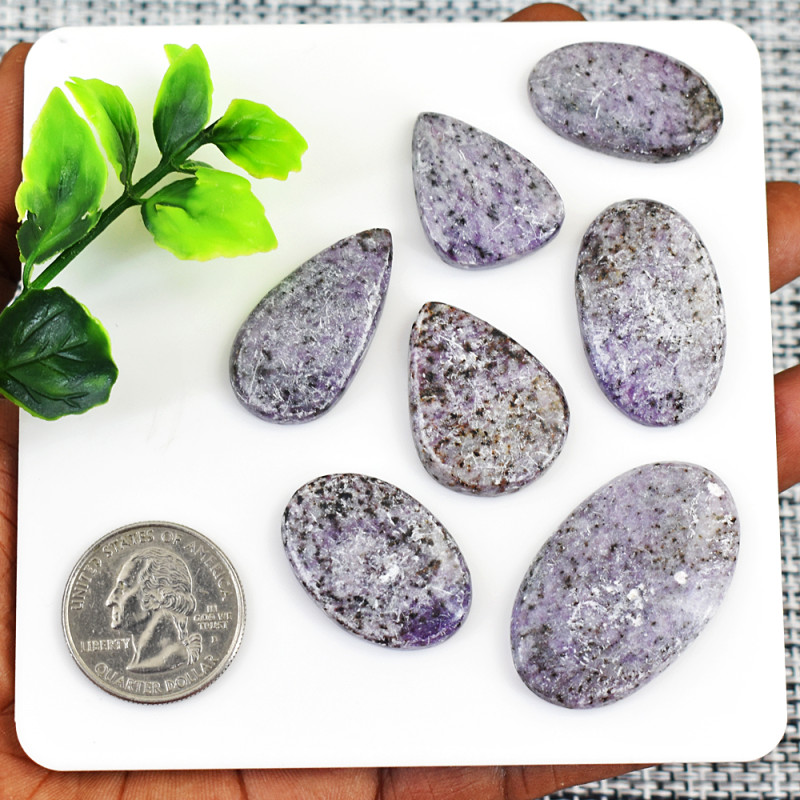 Purpurite is a manganese phosphate mineral. It has a generally darker and broader color range than stichtite, including brownish black, violet, purple, or dark red. Stichtite can be deep-colored, but it's generally lighter. Purpurite’s crystal system is also orthorhombic, while stichtite is hexagonal.

Plus, purpurite is found in igneous pegmatites, while stichtite is mostly found in metamorphic serpentinites. 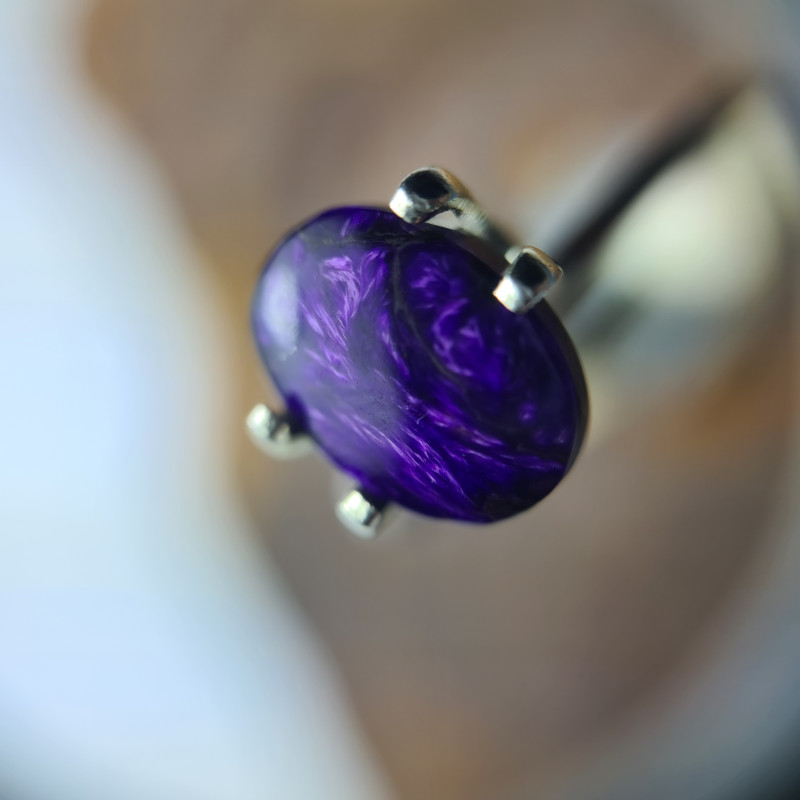 Sugilite is a rare, complex mineral with the formula KNa₂(Fe,Mn,Al)₂Li₃Si₁₂O₃₀. Besides purple, sugilite can be light brownish-yellow, light pink, reddish-violet, or colorless. Sugilite’s purple shades generally have bluer undertones than stichtite. 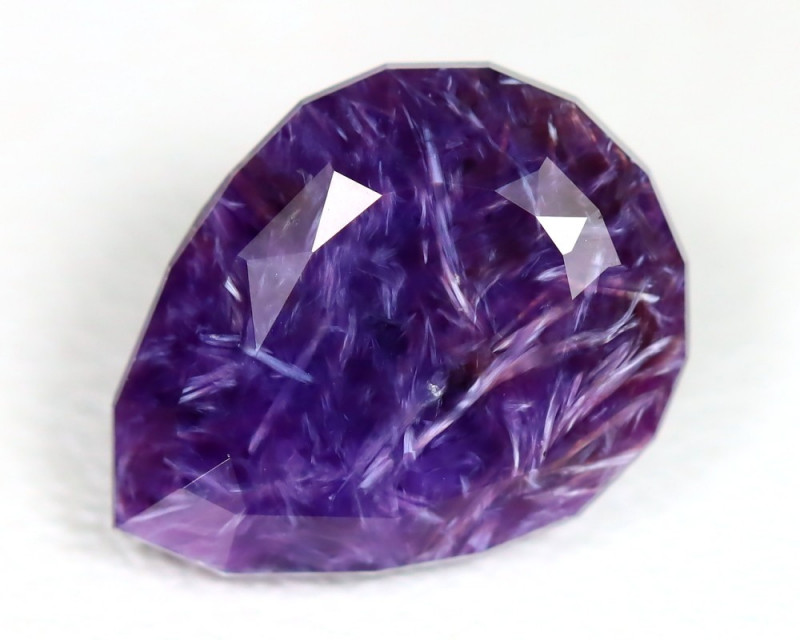 “Charoite” refers to a mineral and a rock largely composed of that mineral, but only the rock is used as a gemstone. The gem is set apart by its distinct swirl pattern incorporating white and black, along with its chatoyancy, two traits stichtite lacks.

Overall, you can distinguish stichtite from each of these gems by hardness. On the Mohs mineral hardness scale, stichtite is at a low 1.5-2.5. Meanwhile, charoite ranks 5-6, sugilite ranks 5.5-6, and purpurite ranks 4-4.5.

Stichtite symbolizes empathy, forgiveness, and restoration. The stichtite spiritual meaning is associated with love and acceptance in all forms — self-love, love for others, divine love, you name it.

In terms of the Atlantisite or stichtite in serpentine meaning, it represents balance, hope, and the harmony of heaven and earth.

Stichtite was first officially discovered in 1910 at the former mining locality of Dundas in Tasmania, Australia. Dundas was a significant mining town historically, but it has since become a ghost town, only inhabited by one couple as of 2017. The area is now part of Zeehan.

Wesley named the new mineral after the manager of the Mount Lyell mine, Robert Carl Sticht. Sticht was an American metallurgist famous for developing pyritic copper ore smelting and helping turn the Tasmanian mining site into a self-sustaining area in Queenstown. The Economist even nominated the Mount Lyell mine as the best-managed mine in Australasia.

Additional analyses of the mineral came from German chemist Laura Hezner in 1912 — where she mistakenly called it chrom-brugnatellite — and American geologist William Frederick Foshag in 1920.

Tasmania was the only known source of stichtite until specimens were found in Barberton, Ohio, USA, described by American geologist Alfred Lewis Hall in 1922. Another occurrence in Scotland showed up soon after, described by English geologist Herbert Harold Read and B.E. Dixon in 1933.

That covers the history, now what is stichtite good for? 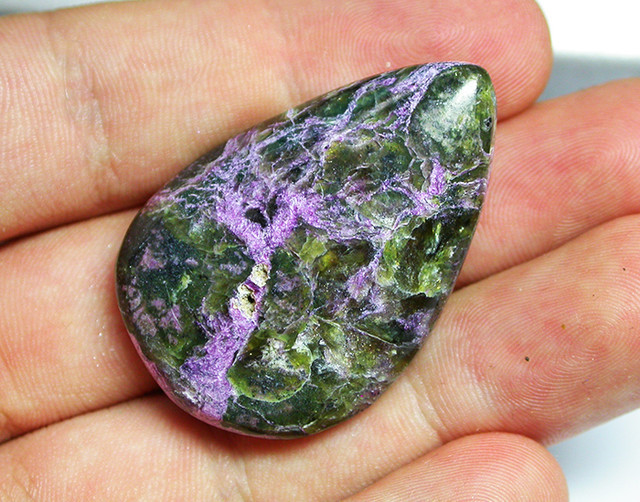 Both stichtite and Atlantisite are healing stones. Like other purple gemstones, stichtite inherently brings wisdom and spiritual awareness.

Pink stichtite joins other pink gems in promoting love and acceptance, while the green gemstone serpentine in Atlantisite offers luck and renewal.

Physically, stichtite is said to help with issues related to the spine and brain, such as dementia, ADHD, and executive dysfunction.

Emotionally, stichtite can benefit those in need of grounding, relaxation, and self-love. It’s said to encourage healthy relationships, promote inner peace, and dispel worries. Stichtite is also believed to help you recover from intense times of stress or change.

Chakra healing involves balancing one or more of the seven energy centers (chakras) along your body to resolve negative symptoms associated with blockages.

Stichtite and Atlansite are crown chakra stones, opening the energy center to bring you the highest spiritual awareness and communication possible.

Stichtite value grading isn’t as traditional as other stones, since it’s usually not faceted into gems. However, we’ll still go over some of the standard value factors and how they relate to stichtite below.

Speaking of finding masses, how does stichtite form? 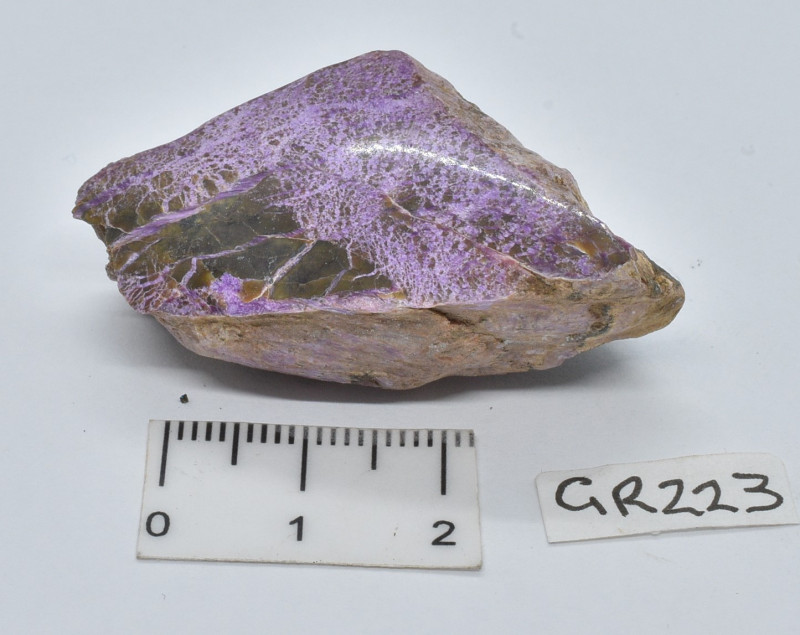 More often than not, stichtite forms as stichtite in serpentine rather than on its own.

The formation process starts when igneous rocks undergo metamorphism, changing into metamorphic serpentinite. Chromite minerals inside the rock become altered into stichtite. You can also find stichtite in igneous rocks, though.

Since the first discovery there, Tasmania has remained the top source for stichtite gems. Other notable sources are:

Technically, Atlansite can only come from the Stichtite Hill mine in Tasmania, but a few of the locales listed above produce similar stichtite in serpentine stones. 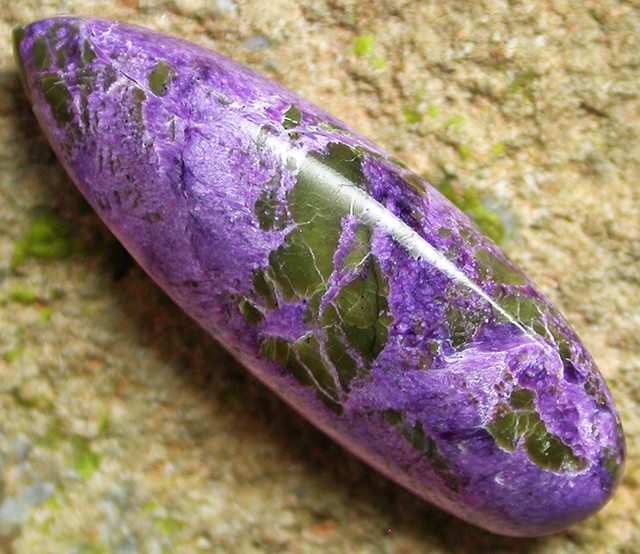 Good news for buyers: stichtite is an affordable gem, especially at wholesale sites like Gem Rock Auctions where stichtite is almost always under $1 per carat.

Stichtite jewelry prices range more broadly, with pendants going for around $10 to $125 and rings ranging from $15 to $180.

Before we wrap up, let’s discuss gemstone care.

Stichtite is an incredibly soft stone, so it’s crucial to be gentle while handling it. We recommend protective settings for any stichtite jewelry.

You can carefully clean it with a soft toothbrush or cloth, warm water, and mild soap. Keep it away from mechanical cleaning systems, bleach, and any acids. It will dissolve in acids.

Store separately from other gems to avoid scratches. 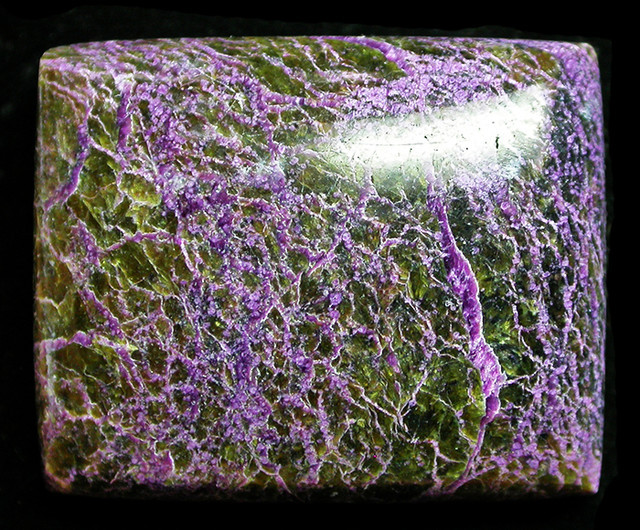 Whether you love purple stones, green stones, or rare Australian gems, stichtite might just be the stone for you. Its Atlantisite variety is a unique gem that brings grounding green energies with spiritual purples, a true embodiment of heaven on earth! 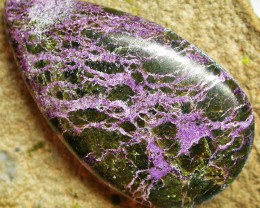 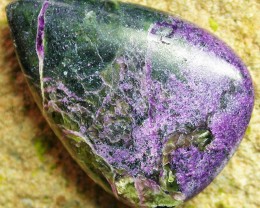 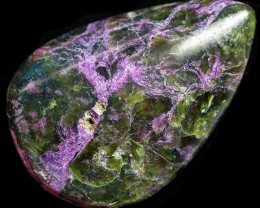 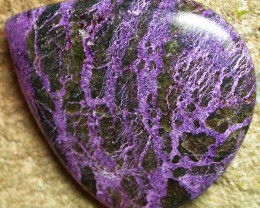