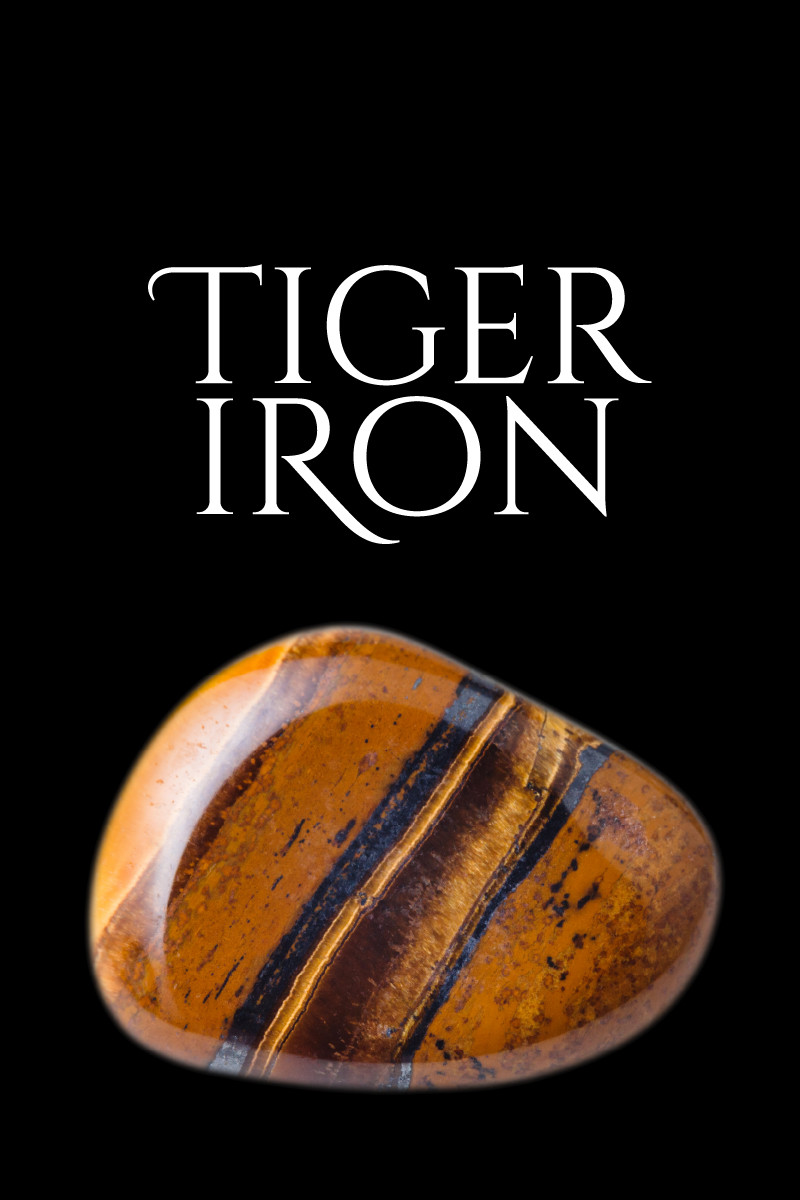 Tiger iron is an opaque gemstone with layers colored golden-brown, red, and black. Unlike most gemstones, tiger iron is a rock instead of a mineral.

If you don’t know, rocks contain multiple minerals (and/or mineraloids), so the exact amount of each mineral varies from one tiger iron rock to the next.

That said, the basic mineral combination inside tiger iron is tiger’s eye, hematite, and jasper. The variation of these minerals among different tiger iron stones creates beautiful, autumnal patterns unique to each specimen.

Want to learn more? Read on as we fill you in on tiger iron’s properties, healing benefits, prices, and more! 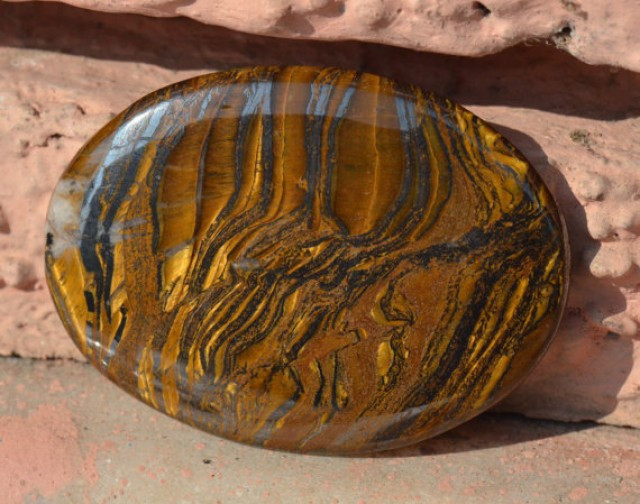 Though it’s not a traditional birthstone, tiger iron can be substituted over the traditional, similar-looking jasper as a March birthstone.

Some nicknames for tiger iron are:

So is tiger iron the same as tiger’s eye? No, but they’re easily mixed up. 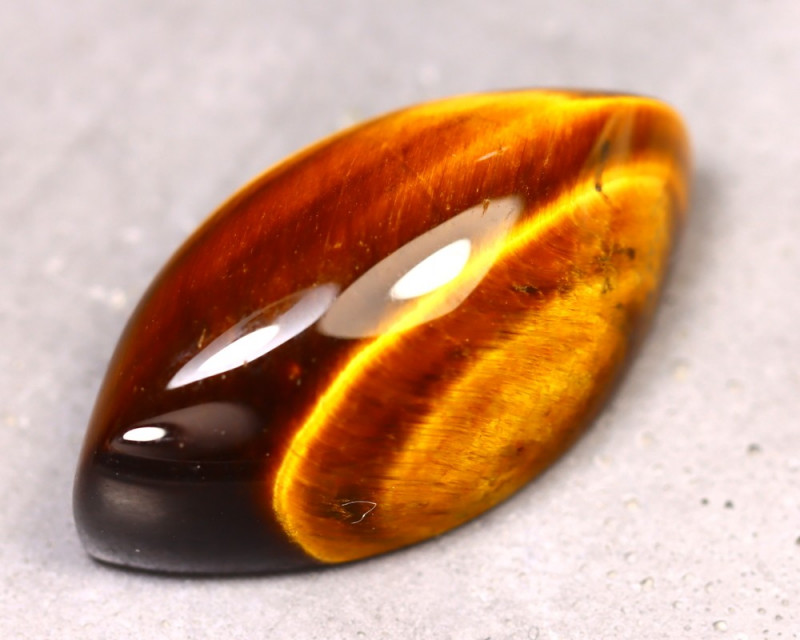 Tiger’s eye is a golden- to reddish-brown rock (usually metamorphic) named for the way its colors seem to glint and shift as you turn the stone, similar to… well, a tiger’s eye.

There are many similarities between tiger iron and tiger’s eye. They’re both opaque rocks with a high polish and similar golden-brown striped coloring.

But the coloring slightly differs between the two. While each stone varies from one specimen to the next, tiger’s eye generally has more gold. Tiger iron has more predominant black and red bands.

The reason for the color differences lies in their composition.

On that note, what is tiger iron made out of?

Tiger iron is sometimes considered a variety of ironstone with the general formula SiO2 and Fe2O3.

The primary minerals in tiger iron are tiger’s eye, hematite, and jasper. You know about tiger’s eye already, so let’s move onto hematite and jasper.

Hematite, or haematite, is a dark iron oxide mineral known for its trademark red to red-brown streak and a metallic sheen. This mineral creates tiger iron’s black or gray metallic stripes.

Jasper is a broad category that describes opaque, color-banded chalcedony stones. Some popular sub-types are bumblebee jasper, mookaite jasper, and kambaba jasper. The jasper you’ll see in tiger iron is usually red jasper, which gets its color from iron impurities.

The multiple minerals at play also mean tiger iron’s hardness is broader than most stones, ranging from 5 to 7 on the Mohs mineral hardness scale.

Below are all of tiger iron’s properties:

Is there more than one type of tiger iron? You bet! 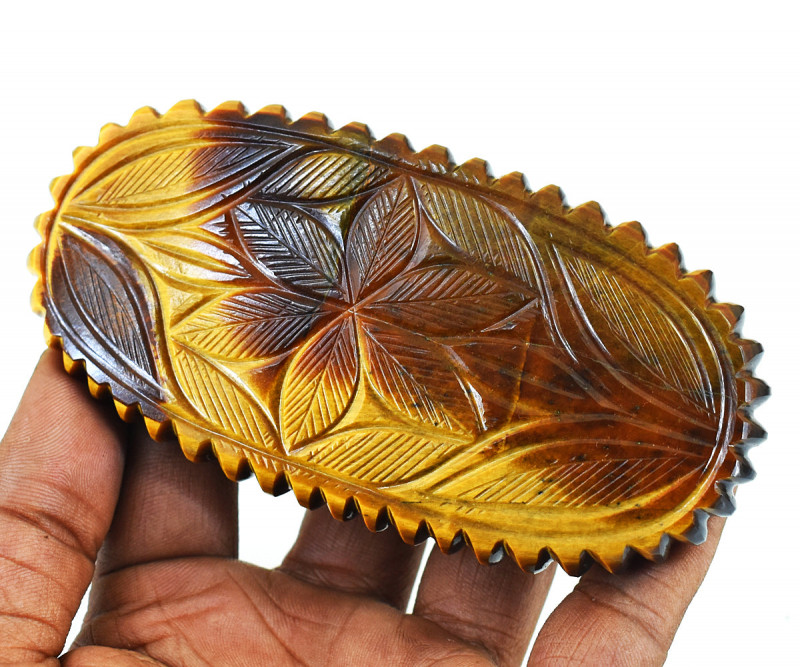 Tiger iron has a couple varieties you may see around. One is also used as a nickname for tiger iron: mugglestone.

Mugglestone is a type of tiger iron with less contrasted color bands. This variety has less red jasper and more hematite. Despite the name, it’s sadly not associated with Harry Potter. Rather, it likely derives from “mucklestone,” a village in England near a neolithic stone monument locally dubbed “devil’s ring and finger.”

The second variety is marra mamba.

Marra mamba may or may not be a tiger iron variety, as some call it a tiger’s eye variety. Regardless, marra mamba gems are stones with color-banding usually in red, brown, and green. Rarer specimens have gold, red, brown, green, yellow, and blue bands. Marra mamba stones only come from the Hamersley Ranges of Western Australia.

With all the properties and varieties covered, let’s shift gears a bit to go over tiger iron’s spiritual meaning. 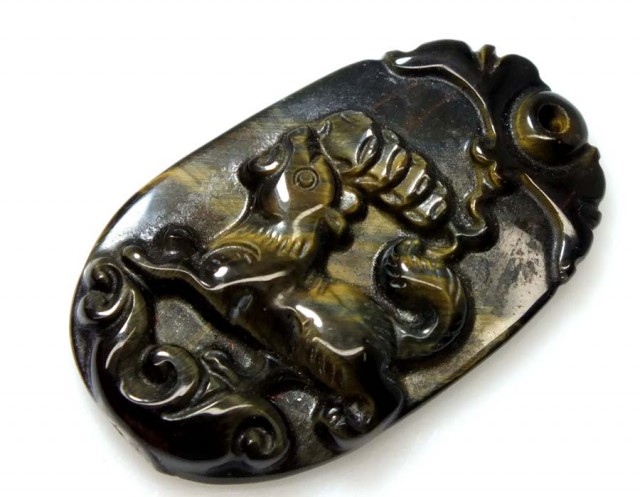 Tiger iron symbolizes strength, protection, and courage. The stone is particularly prevalent in Feng Shui, the ancient Chinese practice of balancing certain energies by arranging items accordingly in a space.

Feng shui is all about balance, which can be achieved with combinations of different elemental colors. Tiger iron combines the earth color brown with the fire color red and the water color black — a balanced trio!

Additionally, the tiger is significant in Chinese mythology. This animal is one of the four celestial animals (a.k.a. four guardians or four auspicious beasts). In lore, the tiger symbolizes strength, foresight, and wisdom.

The name “tiger iron” likely derives from its association with tiger’s eye and addition of iron-heavy minerals in the stone.

The first discovery of tiger iron is unclear, as the stone isn’t in official mineralogical literature. However, its resemblance to tiger’s eye means some of that stone’s history may carry over.

In ancient times, tiger’s eye stones were used for protection and good luck by Sri Lankans and Egyptians.

As a possible ironstone variety, tiger iron’s history also ties to that of ironstone. Though ironstone has been used for centuries, the first recorded discovery occurred in the mid-1800s. Two American miners made the discovery along Lake Michigan, John Vaughan and John Marley. They subsequently established the Eston mines.

Back to the stone at hand, what is tiger iron good for? 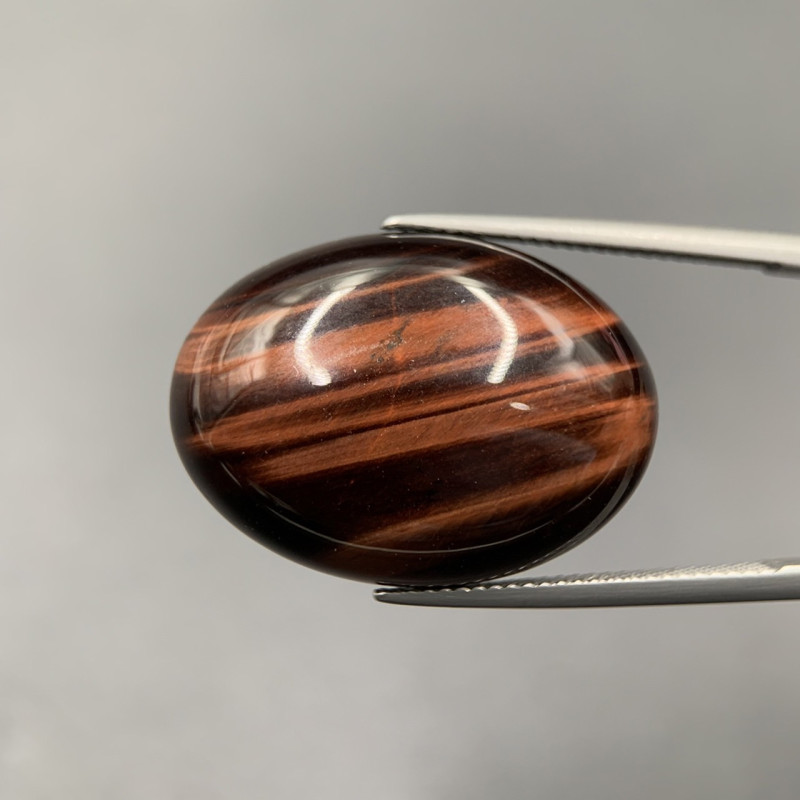 Tiger iron can be used as a powerful healing stone, each of its colors bringing different energies.

Physically, tiger iron is said to treat or help with:

The stone’s iron content also ties to the importance of iron medications in treating blood issues and keeping your energy up. Crystal healers also recommend keeping malachite and tiger iron beside your computer to protect from electromagnetic radiation.

Some of the emotional tiger iron benefits include providing you comfort during times of stress and balancing emotions. It’s also said to help you let go of limiting beliefs and encourage you to ambitiously pursue your goals with confidence.

Chakra healing is an ancient art of balancing your chakras (energy centers along your body) to promote your wellbeing. What chakra is tiger iron used for? Usually, tiger iron is used as a root chakra stone.

The root (or base) chakra is the first energy center, governing fundamental needs like stability and safety. When tiger iron opens the chakra, it helps create a steady foundation for your personal growth. 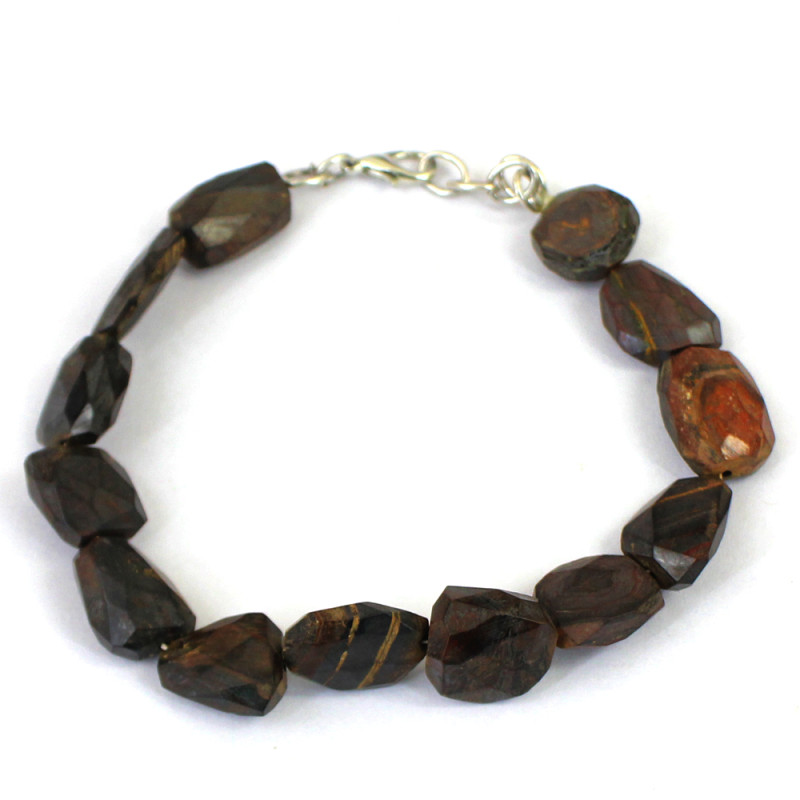 Though tiger iron is a gemstone, it’s not usually graded like most gemstones. Still, we’ll touch on some of the standard value factors like color, cut, luster, and carat weight.

Before it gets fashioned to become tiger iron jewelry or decor, how does tiger iron form?

Tiger iron’s exact formation process is somewhat uncertain, but there are prominent theories. Overall, most scientists agree that tiger iron is sedimentary in some form.

Now, where is tiger iron found?

The top sources for tiger iron are Western Australia and South Africa. However, other notable deposits are in:

Next, we’ll discuss what to expect to pay for tiger iron gemstones. 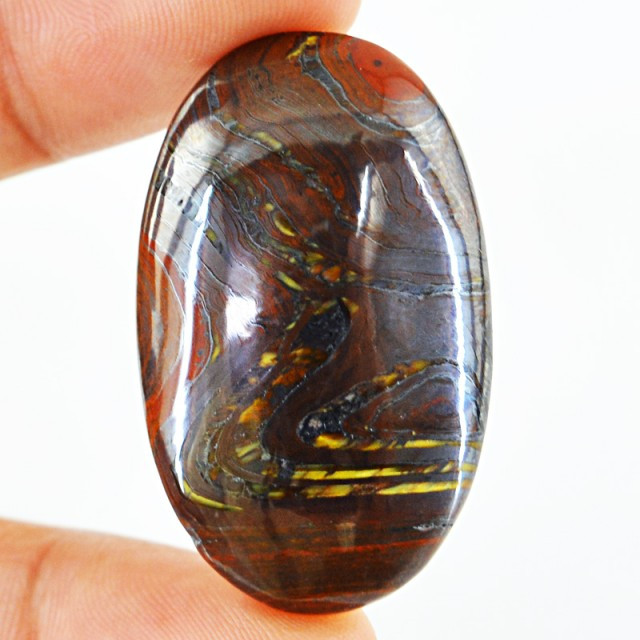 At wholesale sites like Gem Rock Auctions, you can expect tiger iron cabochons to go for around $10 to $80 each. The cabochons are almost always under $1 per carat.

Small tiger iron carvings typically go for around $20 each. Larger carvings like desk spheres can be up to $130.

Most tiger iron jewelry fetches around $20 to $50 unless additional gemstones or pricier metal settings are incorporated.

Before we wrap up, we’ll discuss proper gemstone care for tiger iron stones.

Tiger iron is relatively durable, but its layered internal structure brings downsides in terms of strength. You may want protective settings for your jewelry, especially for more vulnerable items like a tiger iron ring.

To prevent the stone from getting damaged, don’t clean tiger iron with mechanical systems like ultrasonic or steam cleaners.

Can tiger iron go in water? Yep, tiger iron is safe in water. You can safely clean tiger iron stones with a soft toothbrush, warm water, and mild soap. Rinse away any soap residue after, then dry it with a soft, microfiber or cotton cloth. 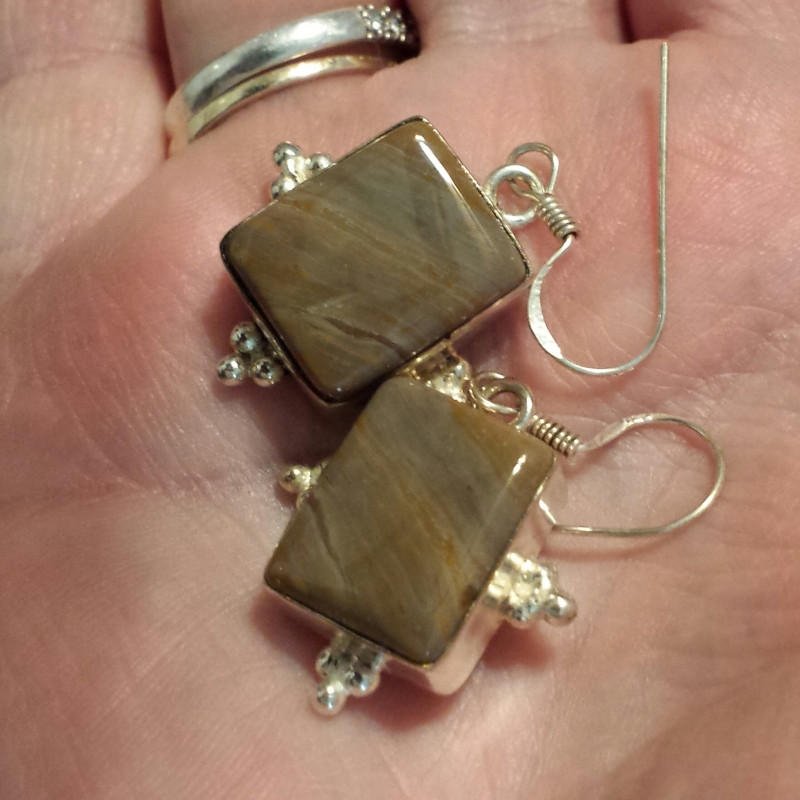 Flaunt Your Ferocity in Tiger Iron!

A tiger may not change its stripes, but that’s not so for tiger iron stones. These gems each have unique stripes and color banding, so you’re sure to have a stone unlike any other. With confidence-boosting properties and fiery colors, tiger iron is sure to bring out your inner tiger! 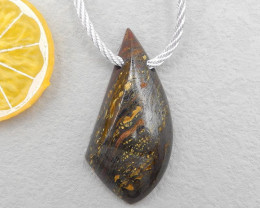