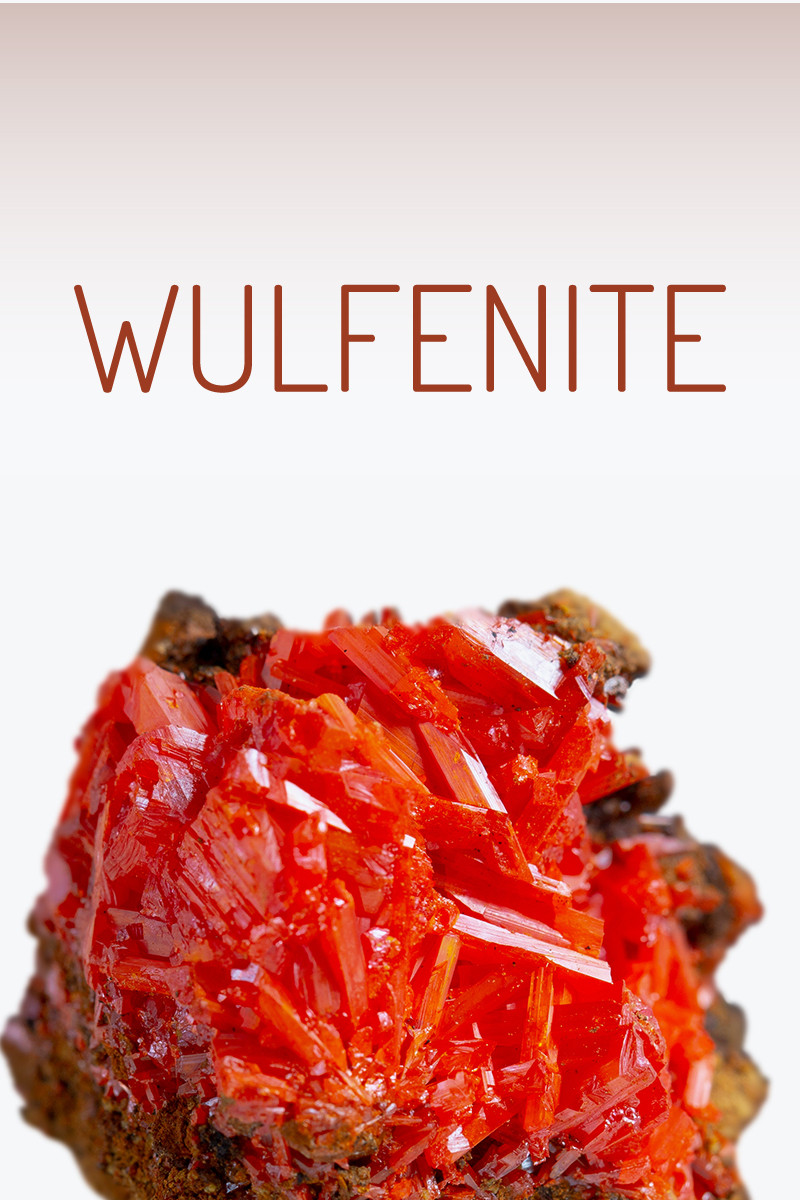 Wulfenite is a commonly bright orange to yellow gemstone most notably known from Arizona, USA. The stone serves as Arizona’s official state mineral and was even the theme for the 65th annual Tucson Gem and Mineral Show in 2019.

Is wulfenite rare or common? The mineral is somewhat uncommon, though it does come from quite a few locales. However, gem-quality crystals that are thick enough to cut into gems are exceedingly rare.

The wulfenite stone is better known as a collector’s stone, partly for its rarity but also because its natural formations are so unique and beguiling.

Interested in learning more before browsing some wulfenite for sale? In this guide, we’ll break down everything you need to know about wulfenite gemstones, including their price, appearance, healing powers, and more. 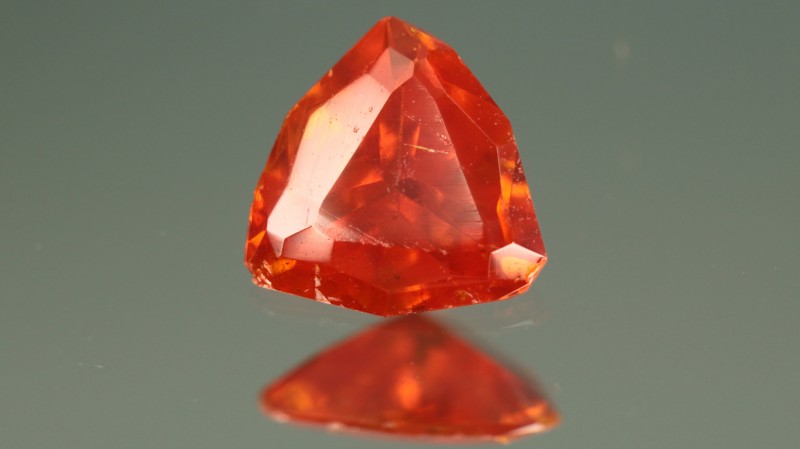 Wulfenite is a semi-precious gemstone that’s also known as “yellow lead ore.” It’s a zodiac stone for Sagittarius and the 7 life path number in numerology.

This stone is one of few minerals containing molybdenum. Molybdenum doesn’t occur naturally on its own, but rather always as part of a compound.

Besides gems, what is the wulfenite mineral used for? For many years, wulfenite was mined as a molybdenum ore, though this isn’t its only industrial benefit.

Because molybdenum is strong and resistant to weathering when combined with other metals, additional wulfenite uses include wet processing (a process for separating ores from their host), oil refining, and steel strengthening (when combined with iron).

On the mineral side of things, what mineral is wulfenite?

Wulfenite is a lead molybdate mineral. The mineral’s formula is PbMoO4. It joins other molybdenum minerals like molybdenite and powellite. Wulfenite also forms a series with the much rarer stolzite (PbWO4), with wulfenite on the molybdate-dominant end and stolzite on the tungsten-dominant end.

What does wulfenite look like? Wulfenite has warm orange, yellow, or red hues. Its unique shapes include pyramidal or bipyramidal (two pyramids attached at the base) shapes, along with thin tabular crystals or granular masses.

Besides its autumnal colors, wulfenite’s luster is a stand-out feature. The luster can be adamantine, like that of diamond, to resinous, like that of amber. Wulfenite also has a high refractive index, meaning lots of light passes through it.

Another unique trait of wulfenite is that some specimens are piezoelectric, meaning they generate an electrical charge under mechanical pressure. Because its density is high, it’ll feel heavier than other crystals of the same size (dimensionally).

Here are the remaining mineral properties of wulfenite:

Now, what does wulfenite mean symbolically? And when was it first discovered? 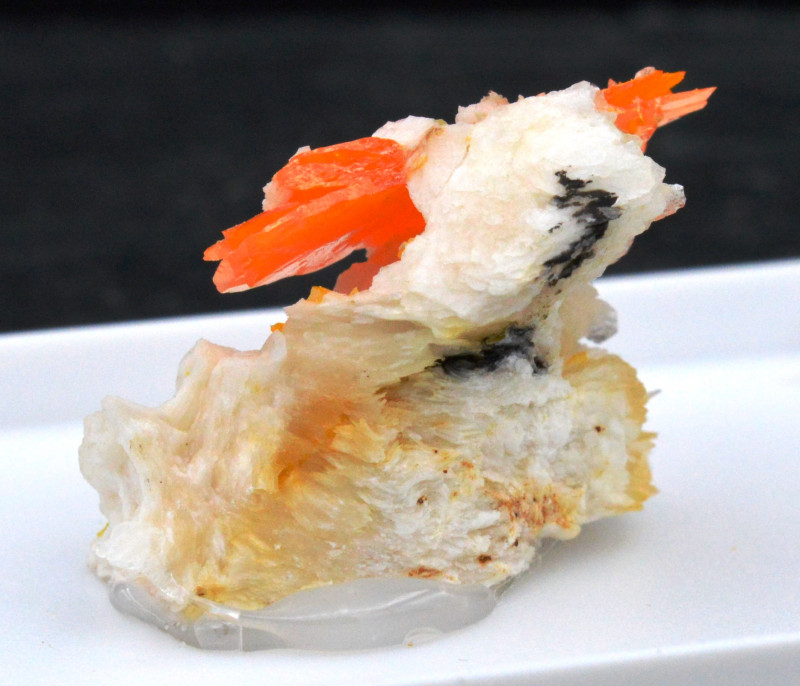 Wulfenite symbolizes passion, vitality, and past lives. In spiritual circles, wulfenite is a popular crystal for ritual work and acquiring the knowledge and wisdom from one’s past lives.

Haidinger chose the name “wulfenite” to honor another Austrian mineralogist and botanist Franz Xaver von Wulfen. Wulfen is well known for exploring and reporting on the botany of the Eastern Alps. You may see other instances of names honoring Wulfen, such as the Wulfenia and Wulfeniopsis plant genuses, along with over 20 other plants with scientific names containing wulfenii.

If Wulfen is mostly associated with plants, why does this mineral honor him? Well, Wulfen was a man of many passions, including mineralogy, and he notably published research on lead ores from Carinthia in 1785.

Wulfenite was mined pretty consistently throughout the 1800s and into the 20th century for its molybdenum content. However, this changed around the 1950s when mining operations focused on getting molybdenum from molybdenite instead, as molybdenite was easier to mine.

That said, many folks still prize wulfenite. As recently as 2017, the state of Arizona (USA) designated wulfenite as its state mineral.

Another group that loves wulfenite is crystal healers! 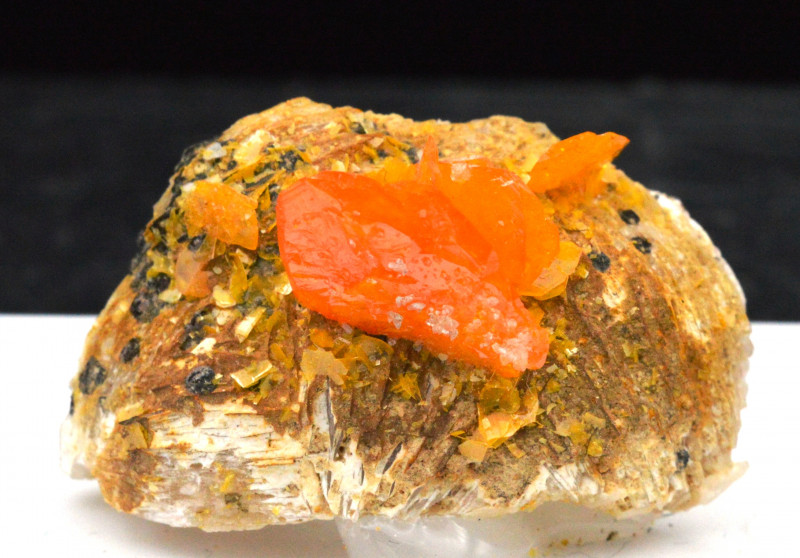 Like all gemstones, wulfenite’s color influences its powers as a healing stone. Red wulfenite crystals, like other red gemstones, bring qualities of energy and motivation. Orange wulfenites evoke the orange gemstone benefits of creativity and intimacy, while yellow wulfenites join other yellow gemstones in promoting joy and intellectual curiosity.

Physically, wulfenite is said to help with:

If you struggle with getting the energy or motivation to get work done, wulfenite is the stone for you. The crystal is said to ignite perseverance and enhance focus, giving you the motivation to accomplish any task with confidence.

Additionally, wulfenite is believed to clear the mind and lift your spirit. If you have a project you’ve been wanting to pursue, especially in a creative field, meditating with wulfenite can help you plan out the path to make that dream a reality.

Chakra healing involves opening or balancing particular energy centers (chakras) along your body, each of which governs various aspects of wellness. Wulfenite is a chakra stone for harmonizing the sacral and solar plexus chakras.

The sacral chakra governs our emotions and intimacy, while the solar plexus chakra rules creativity and willpower. You can use wulfenite to bring them into greater balance and symbiosis, allowing you to bring your daydreams to fruition.

You know its value for healing, but what makes wulfenite valuable as a gemstone? 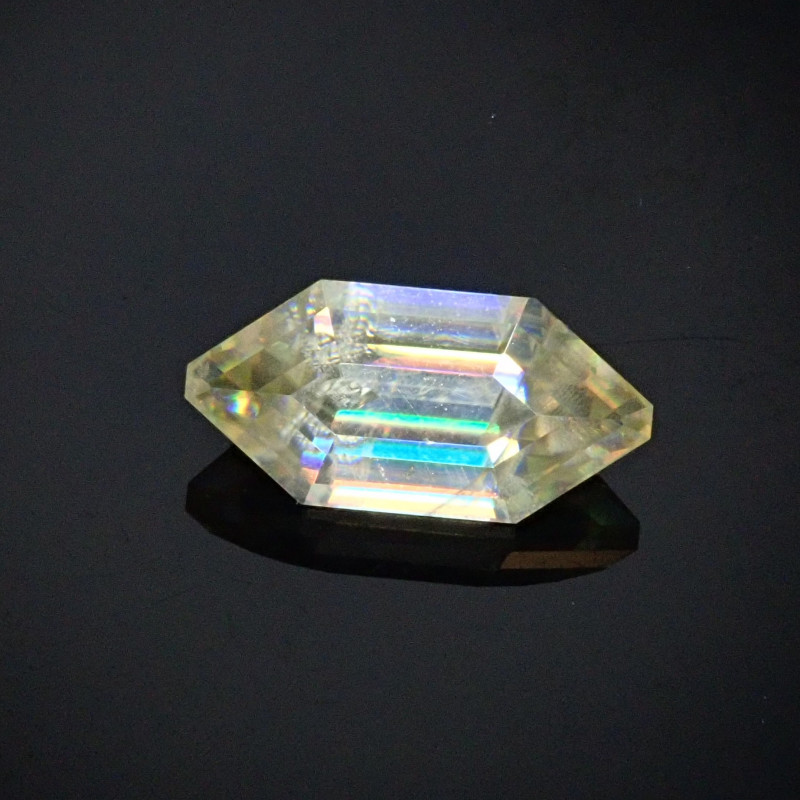 Wulfenite’s value comes from its gemstone properties, or value factors, based on the categories of color, cut, clarity, and carat weight, along with if it’s synthetic or natural.

Wulfenite is allochromatic, meaning its pure form is colorless. However, colorless wulfenite is rare. Usually, impurities or inclusions create new colors, the most common being shades of orange, yellow, or red. Less often, specimens may be blue, brown, green, or black.

Yellow to red colors likely come from chromium impurities, though some theorize that molybdate is responsible for yellow hues. Some specimens show different colors on different sides, such as brown on one side and red on the other.

The lush red wulfenites are usually most valuable.

More often, wulfenite crystals or specimens are sold in their raw state, uncut.

Wulfenite crystals almost always contain inclusions, as these give the stone its coloration. Some interesting inclusions or impurities include black manganese crystals, red mimetite spheres, and thin, black descloizite blades.

Any wulfenite crystal with no visible inclusions is rare and incredibly valuable.

Namibia is the only source for larger gems, with faceted examples over 50 carats, but the amount of facetable Namibian material is still scarce. Arizona has produced material yielding faceted gems as large as 5 carats.

The largest currently known wulfenite is a yellow, 56-carat specimen from Namibia.

While labs haven’t enhanced wulfenites, they have created synthetic wulfenite gems. The two processes used for creating these stones are the flux and pull methods, though you can also weld molybdite to cerussite to create synthetic wulfenite.

Speaking of natural material, how does wulfenite form? 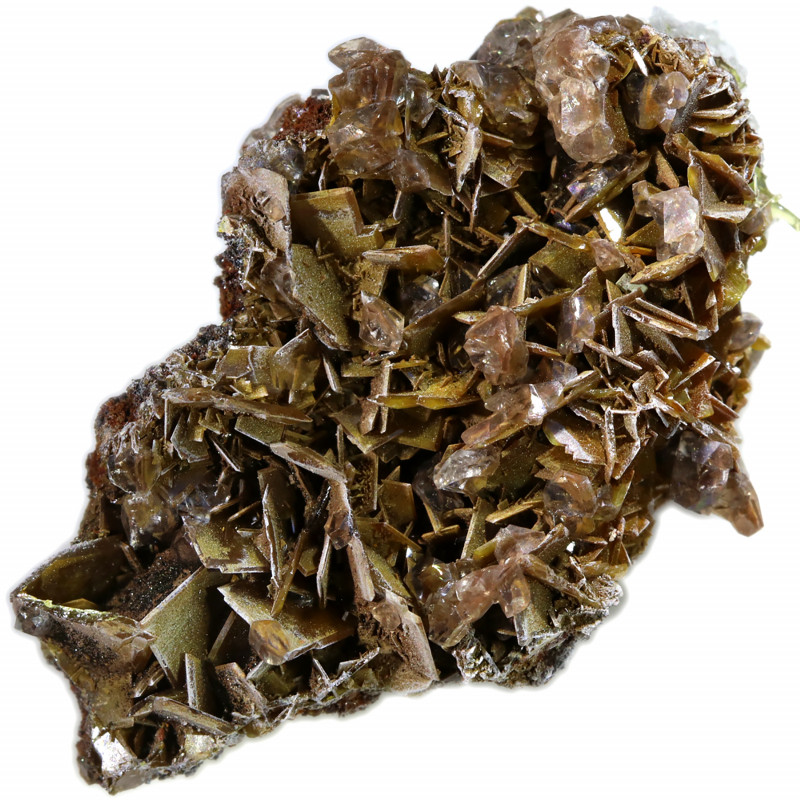 Wulfenite is a secondary mineral, meaning it forms when primary minerals (formed inside rocks as the rocks formed) become altered. The alteration method is mostly oxidation of lead minerals, as you’ll typically see wulfenite in the higher, oxidized areas of hydrothermal lead veins.

Where is wulfenite found? Wulfenite has a few different sources. The main sources are known for producing distinctly colored wulfenite. Red Cloud Mine in the state of Arizona, USA, is perhaps the best known locale, producing high-quality, deep red crystals. 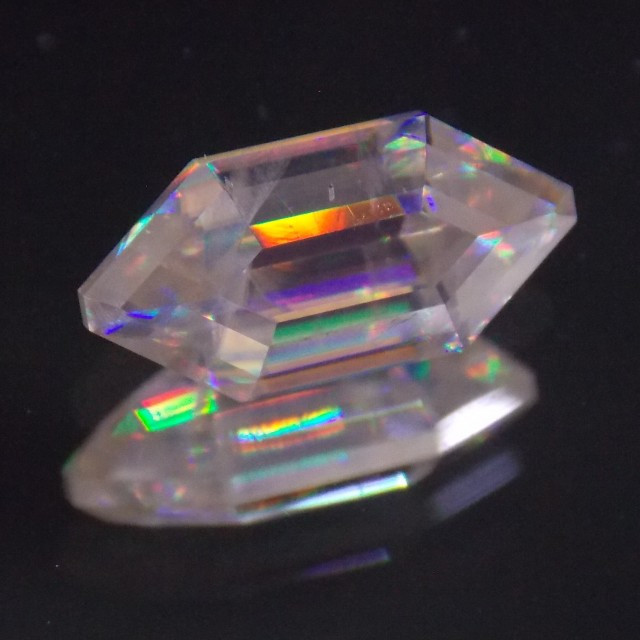 Raw wulfenite is much more affordable. The average wulfenite price per gram is $2.50-20 per gram (or $0.50-$4 per carat) at wholesale prices. However, rough, translucent wulfenite crystals with bright orange coloring can be closer to $20 per carat.

First, let’s discuss safety. As a lead mineral, is wulfenite dangerous? Polished or fashioned wulfenite is safe to handle. Rough material should be handled with gloves. Never drink elixirs made by soaking wulfenite.

Onto gemstone care, this stone is quite soft, so any wulfenite jewelry should have protective settings. Even copper coins can scratch wulfenite’s surface, so be sure to store and transport it away from other materials.

The stone is also sensitive to vibration and heat, so special care should be taken when handling the stone. It’s better suited for display than jewelry wear.

Because dust contains quartz particles, which rank at 7 on the Mohs scale, do not wipe wulfenite’s surface to clean it. The safest method is to gently pat the surface with a soft, dust-free, microfiber cloth.

Store wulfenite stones in a dark, cool area that isn’t susceptible to shaking or vibrations. 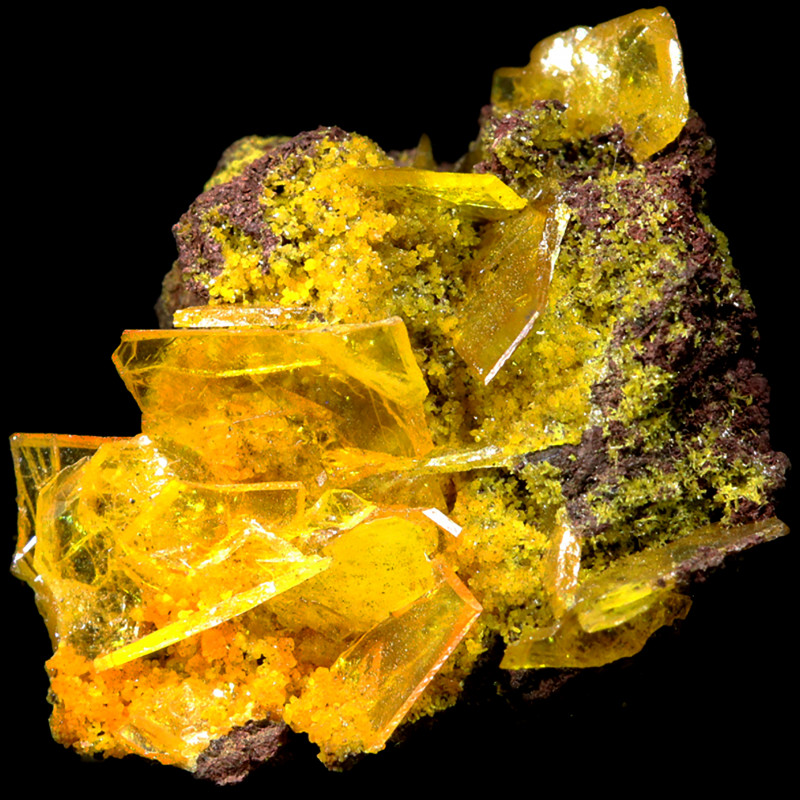 Wulfenite has some impressive gemstone qualities, from its diamond-like luster to its vibrant and unique autumn coloring. Beyond that, this crystal is perfect for igniting your passion and giving you that push you need to make your daydreams a reality. 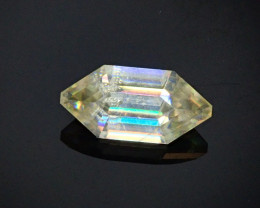 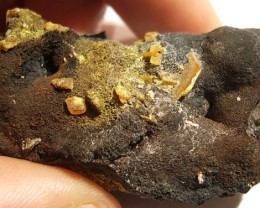 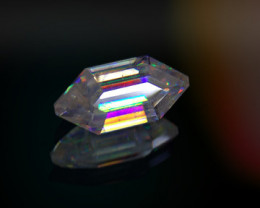 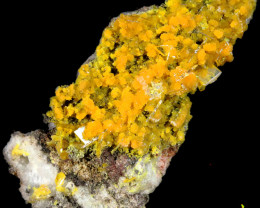 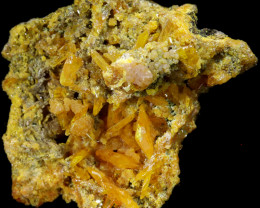