Pearls have long been a symbol of beauty and purity. They are contemporary classics, and now there are far more fashionable options to choose from than the strand of pearls you remember hanging from your grandmother’s neck.

There are several types of pearls that you can choose from to add stunning pieces to your jewellery collection.

Pearls are formed when irritants (like sand, for instance) finds its way into the shell of a mollusc. In reaction, the mollusc begins to produce layers of nacre around the irritant. In natural pearls the irritant generally comes from the water its surrounded by, while in cultured pearls a piece of tissue is inserted by people to get the process started. 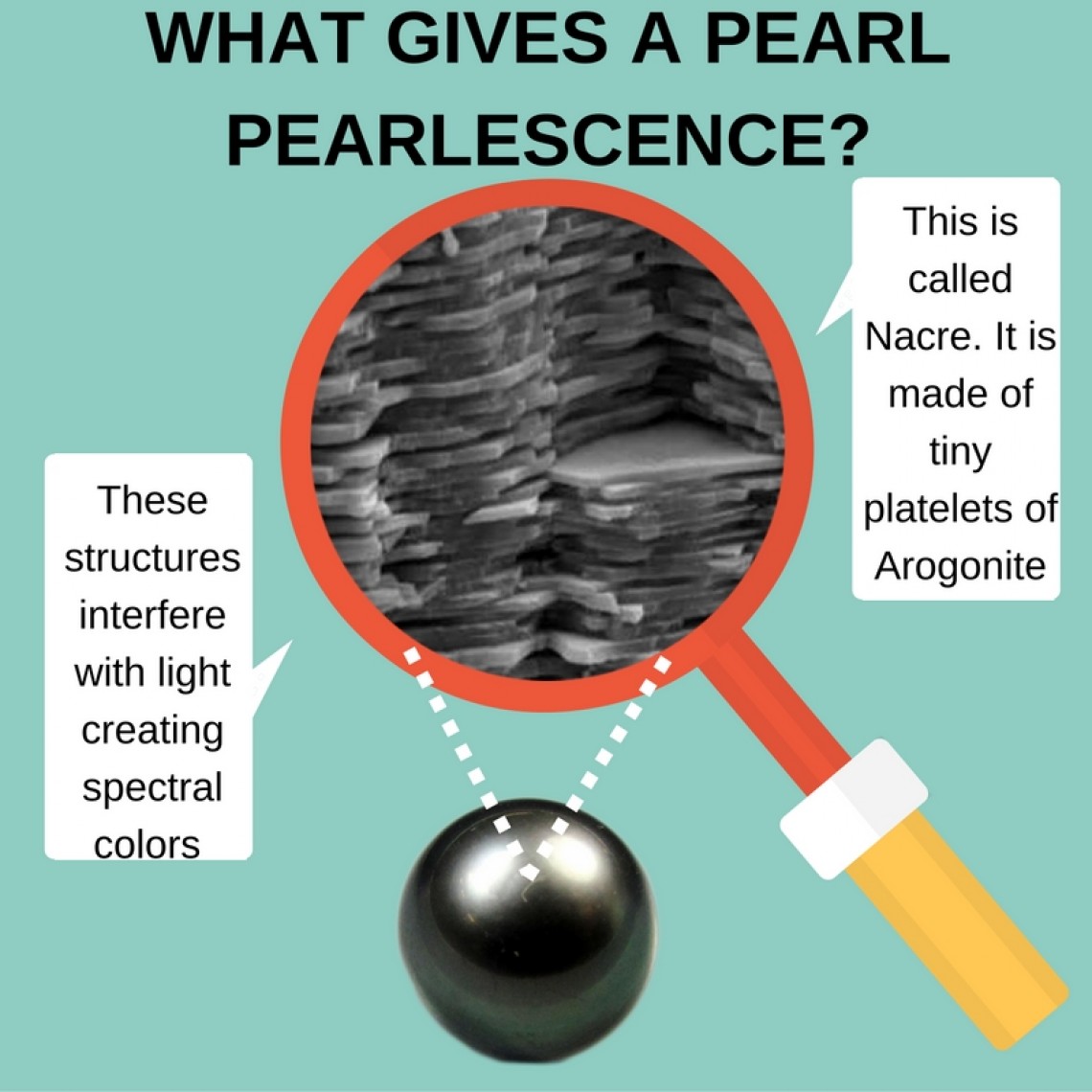 In both instances the nacre quality will dictate that quality of the pearl’s lustre and shine. This is key to both its value and its beauty. The pearl’s surface should be free of marks and smooth. The shape itself may be round, misshapen, or pear-shaped. The misshapen ones are referred to as baroque pearls.

When you are shopping for pearls, remember they are available in a variety of lengths.

There are two classes of necklace

Traditionally, most natural pearls were found in the Persian Gulf. However, the majority of them have already been harvested, therefore natural pearls are tremendously rare. You may find small, natural pearls available for purchase, but they are costly.

This type of pearl is grown in a pearl farm. Molluscs are farm raised and once they are old enough, a technician will implant a mother-of-pearl bead. The molluscs are then returned to the water and cared for while the pearls are allowed to form.

Not every mollusc will produce a pearl, and not all of them will be of high quality. Over ten thousand pearls may need to be sorted through before a single princess length of uniformed pearls can be matched.

Pearls can be found in both freshwater and saltwater- additionally, various molluscs can produce different looking pearls.

This cultured pearl is grown in Chinese and Japanese waters. They are generally around 2mm, but in some rare cases can be as large as 10mm. They are round, and usually cream or white coloured. They come from the Pinctada fucata martensii oyster, which are fairly small- thus produce the smaller pearls. Akoyas were originally imported to the US by Mikimoto. Though, the quality has fallen off due to the primary source of the pearls being moved to China. Despite that, Mikimoto is still the most widely distributed brand of the pearl. Mikimoto branded pearls command a premium price, that doesn’t always match the quality being sold. 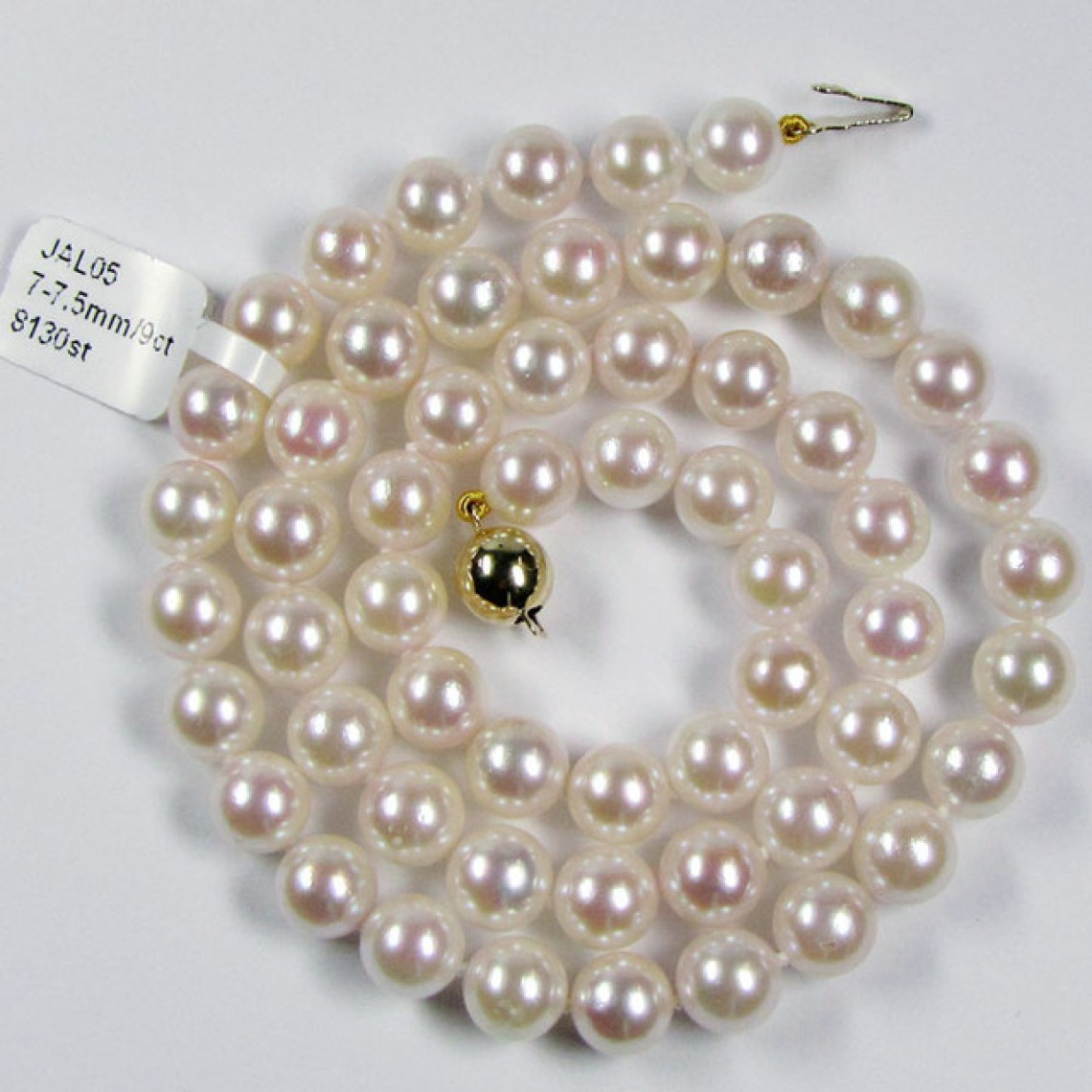 This pearl is produced in the Philippines, Australia, and Indonesia. It’s the largest of all pearls and ranges in size from 9mm to 20mm. It can be cream, white, or golden, and they are harvested from the oyster pinktada maxima. 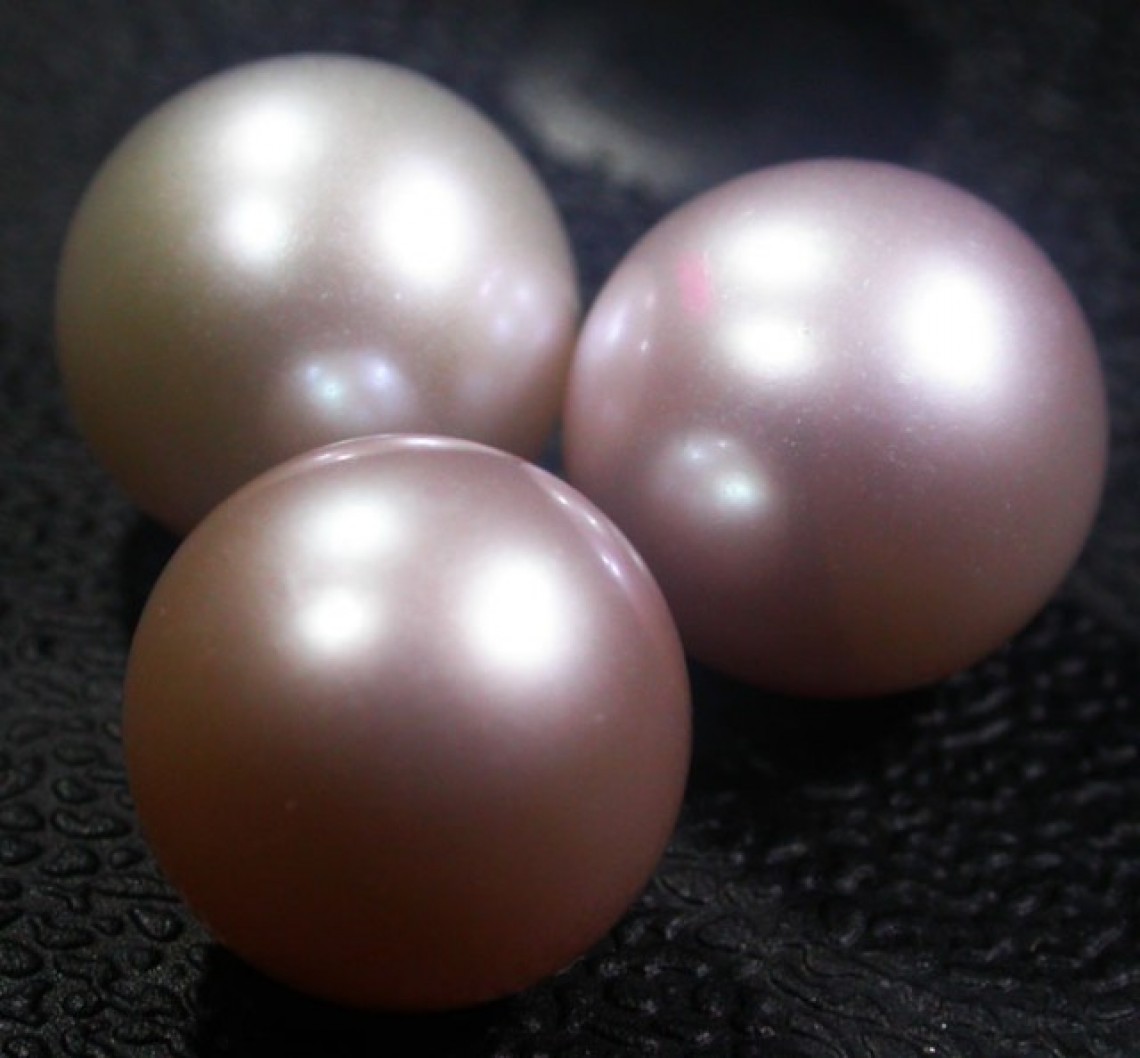 Despite the name they are not exclusively produced from Tahiti. They’re grown throughout several of the French Polynesian islands. Their size generally ranges between 8mm and 16mm. These pearls are naturally coloured in ranges of blue, purple, green and grey, but they are collectively known as black pearls. The Tahitian pearl comes from the black lip oyster, Pinctada margaritifera.

Tahitian pearls are considered the most striking, sought-after pearls on the market nowadays. While they often described as black, their colours cover the complete spectrum from dark-black to silver-white, and almost every colour in between, including the most accepted peacock and green. The colors of these Tahitian pearls are completely natural and guaranteed to be unprocessed. For the most stylish pearls, consider a full strand of Tahitian pearls. 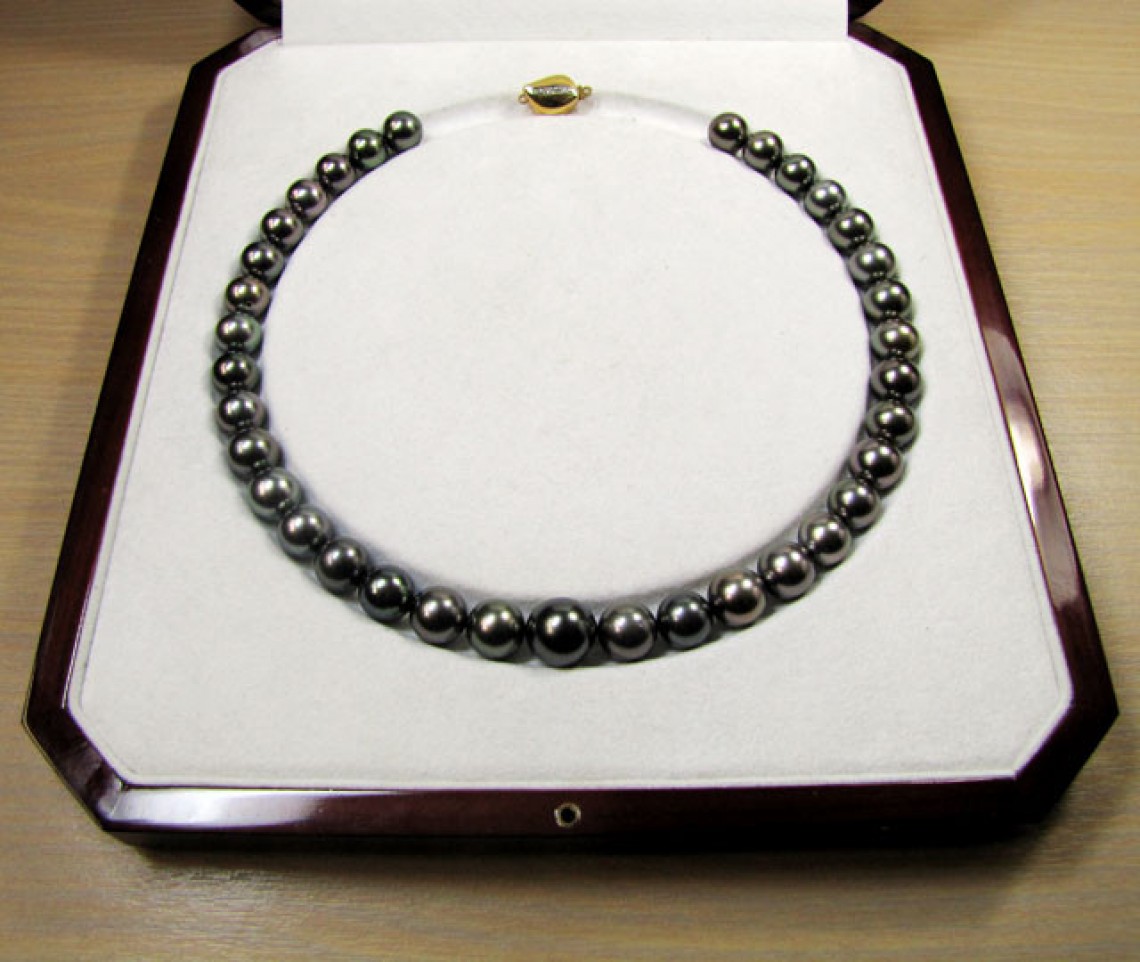 These are formed in the Paua mollusc, which is an Abalone variety. They are available in a broad range of blue, though they come in other colours, such as golds, pinks, greens, reds, and violet. There is a chameleon quality to them, with the light causing colours to change. It’s these colour changes that give each pearl its own distinctive character. 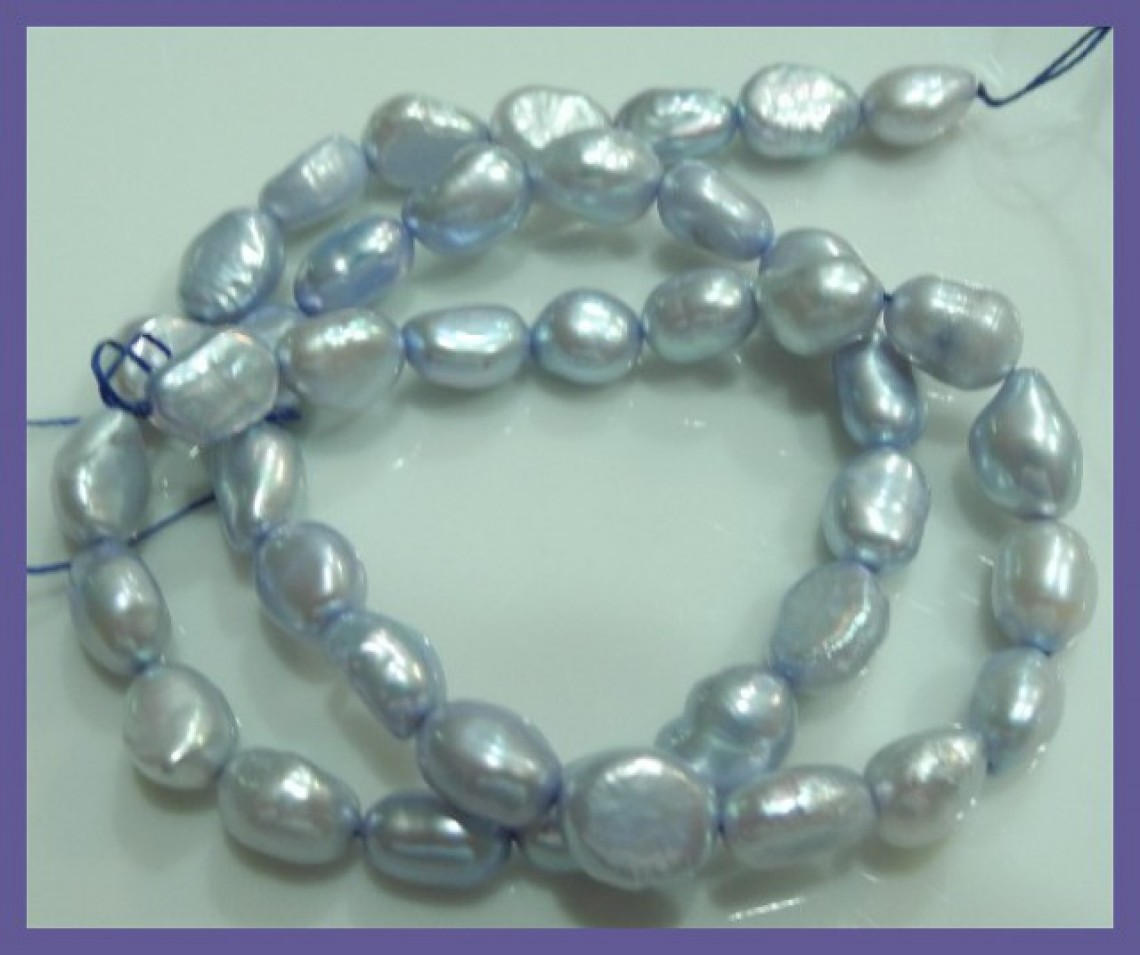 These types of pearls are generally grown in rivers, ponds, and lakes- and predominantly in China. Many of these are white and generally resemble the Akoya Pearl in both size and shape. However, they can be produced in varying shapes, and a range of pastel colours.

The majority of freshwater pearls don’t have a bead nucleus, just a piece of tissue that results in a thicker nacred pearl than the cultured akoya. 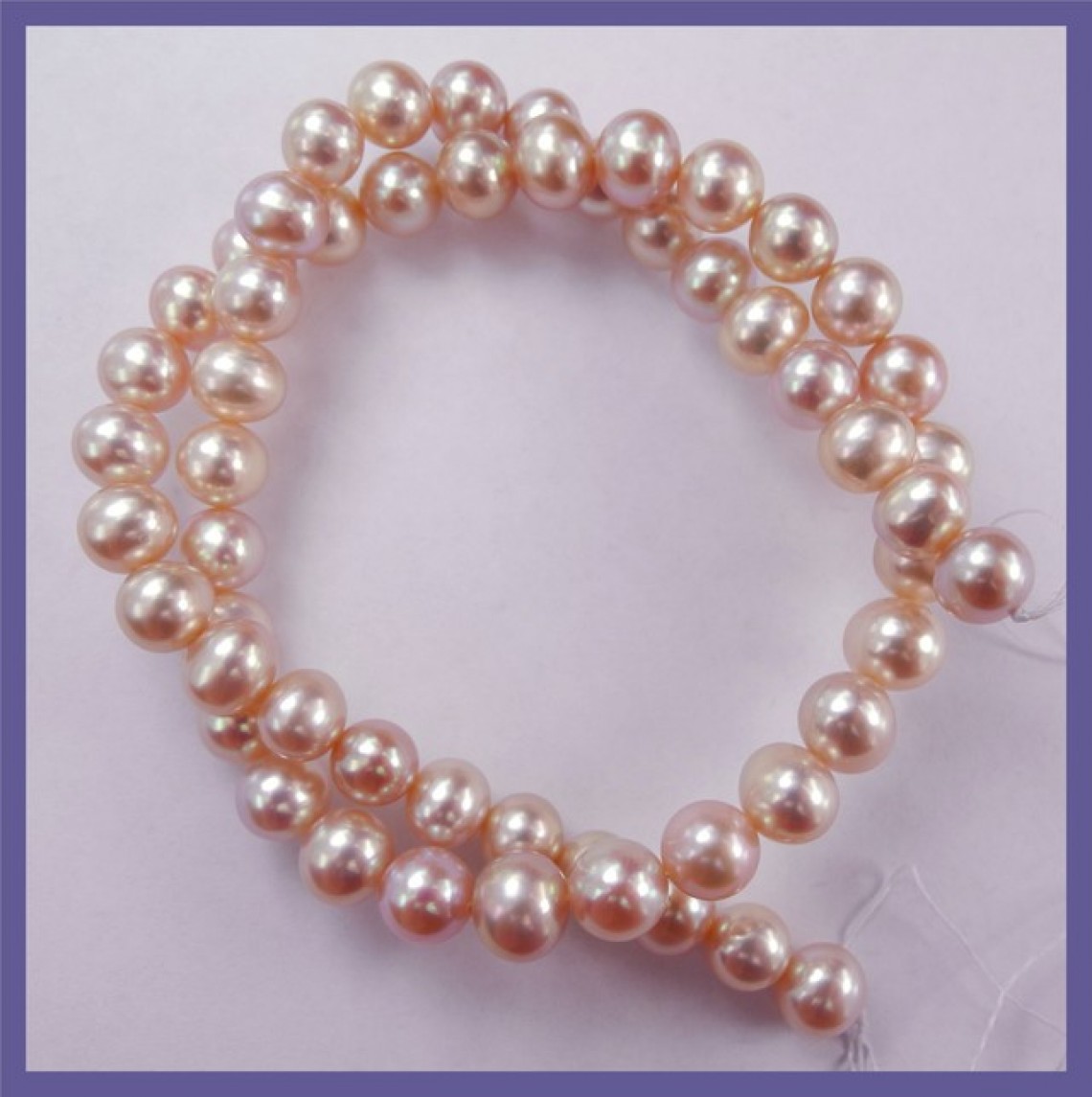 Mabe Pearls are quite diverse from what other people might think about “normal” pearls. The explanation for this stems from the manner that mabe pearls are produced. They are also considered to be “semi-spherical refined pearls”. Instead of growing within the body of the mollusk, like the case with other pearls, it grows inside the shell.

This method causes mabe pearls to produce a flat side, as opposite by being fairly spherical, or at least curved as standard pearls. This also portrays why mabe pearls are regularly referred as “half pearls”. Mabe pearls are most regularly produced inside saltwater oysters from the regions of Australia, Indonesia, Japan, and French Polynesia.

Moreover, these pearls come in an extensive range of beautiful pearl colors, which come from light pinks, to more bluish colors. The exclusive nacre of the mabe oyster permits the hues that are quite sparkling and rainbow-like. Their vividness is quite remarkable at times, particularly the rarest colour, such as pink with gold swirls.

The Mabe pearl is also well-known as the penguin wing oyster and is used as the mother shell. These pearls are highly-distributed all over the world along the steamy and semi-tropical seas, making them readily accessible to various pearl farmers at different parts of the world. 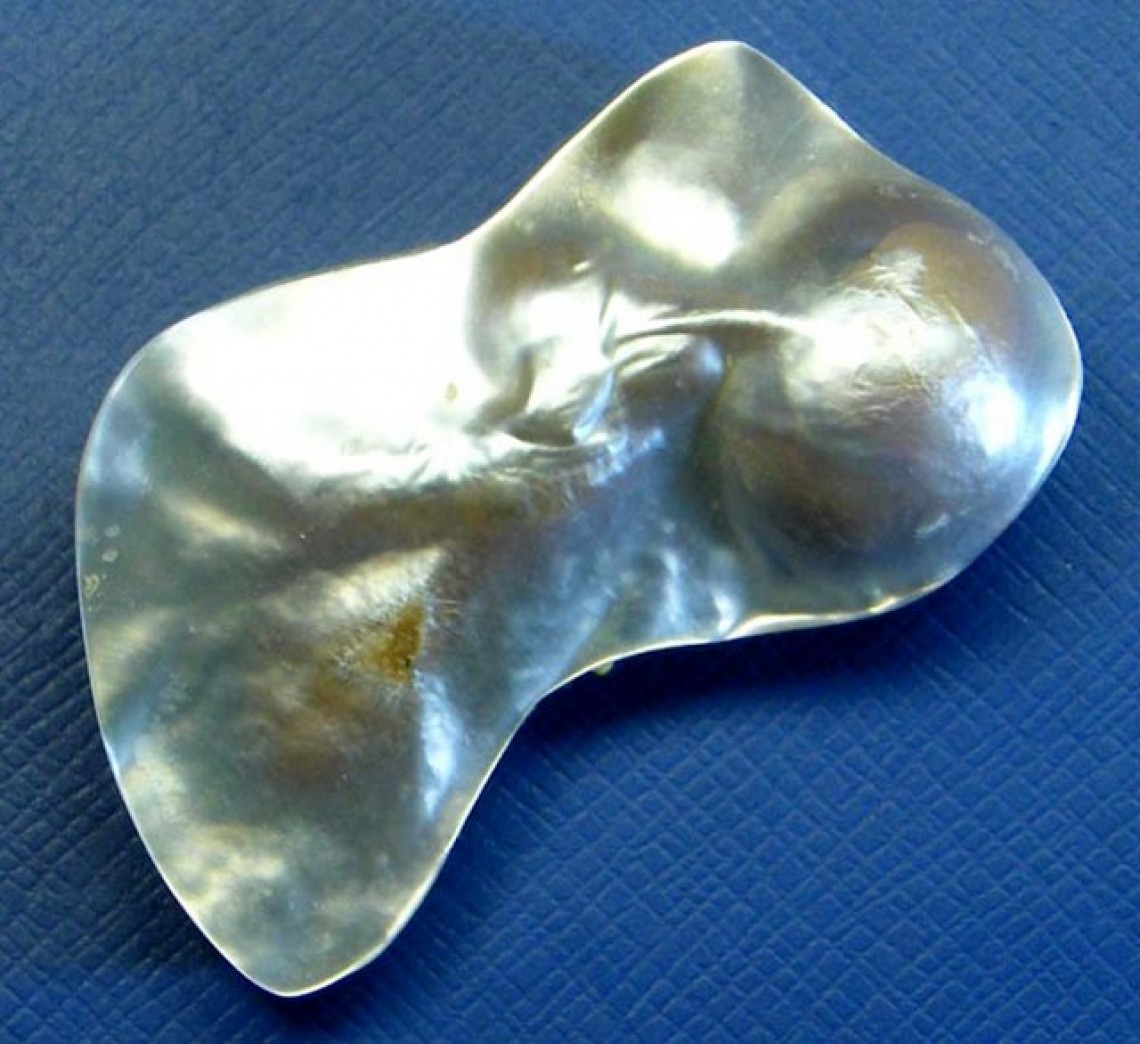 In Japanese, Keshi literally means “poppy seed”. It was used to depict diminutive seed-sized pearls originated as by-products of the pearl culturing method. Once the debris enters an oyster during the harvesting process, this oyster encloses the debris with nacre, thus producing keshi pearls. Some other shapes of keshi pearls are flat, rectangle, oval, or off round. These pearls arrive in different colours, such as white, rose, grey, black, and many more. Due to its broad nacre composition, they are extremely glossy and flickering. However, South Sea keshi pearl and Tahitian keshi pearl are the most popular varieties. 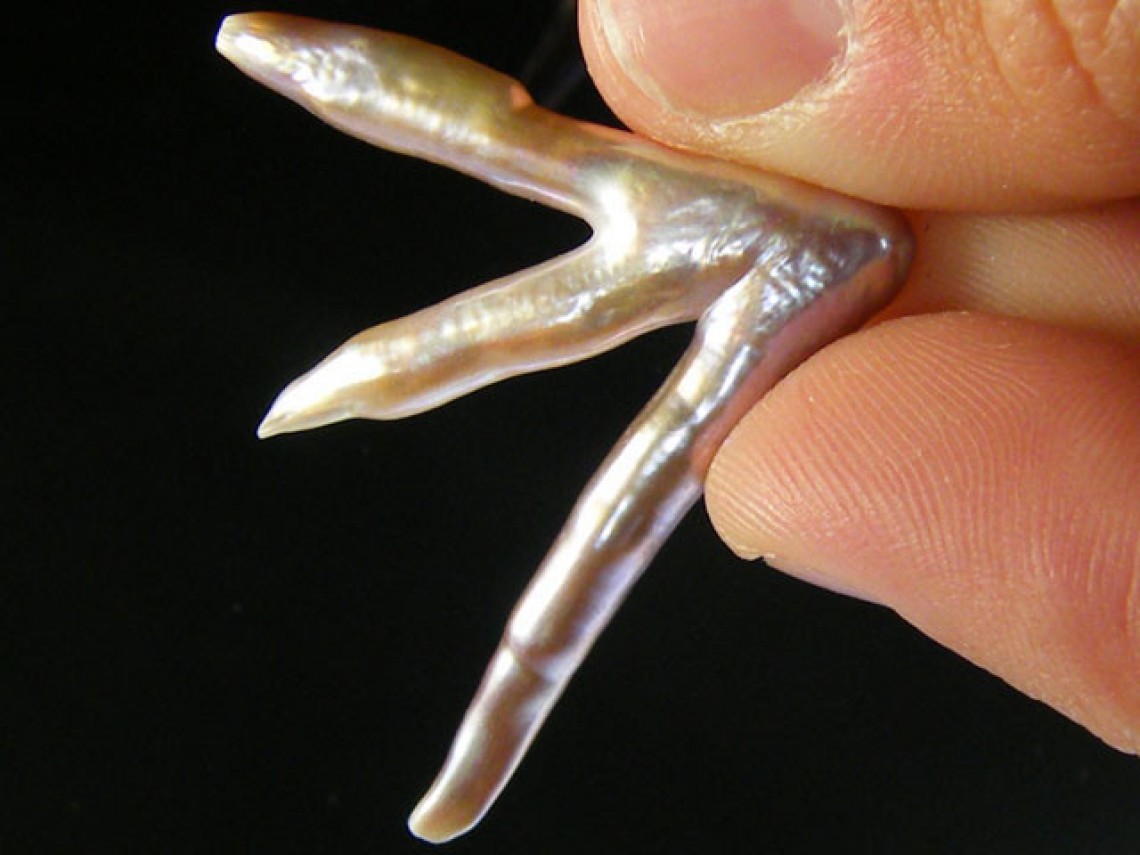 Imitation pearls are usually just a glass bead that has been coated. They tend to have a high lustre, but not in the same depth that is seen from high quality cultured pearls.

It should be relatively easy to separate an imitation pearl from a natural pearl or a cultured pearl. However, it can be challenging to differentiate between natural pearls and cultured pearls. Additionally, many pearls go through a treatment process to alter their colour, and enhance their lustre.

The treatment affects the value, so it’s important to obtain advice from an experienced jeweller or gemmologist.

The most difficult aspect of choosing a pearl is the grading. Unfortunately, there is no standard or recognized system for pearl grading. Although, Tahitian pearls are slightly different as the export and grading is under the control of the French Polynesian government.

As the world’s lone organic gemstone, they are rather delicate. Taking proper care of your pearls is an essential aspect of ensuring that your investment lasts a lifetime. Many personal hygiene products, such as hairspray and perfume, can damage the beauty and lustre of a peal. You should always invest in a pearl care kit for your pearl jewellery. 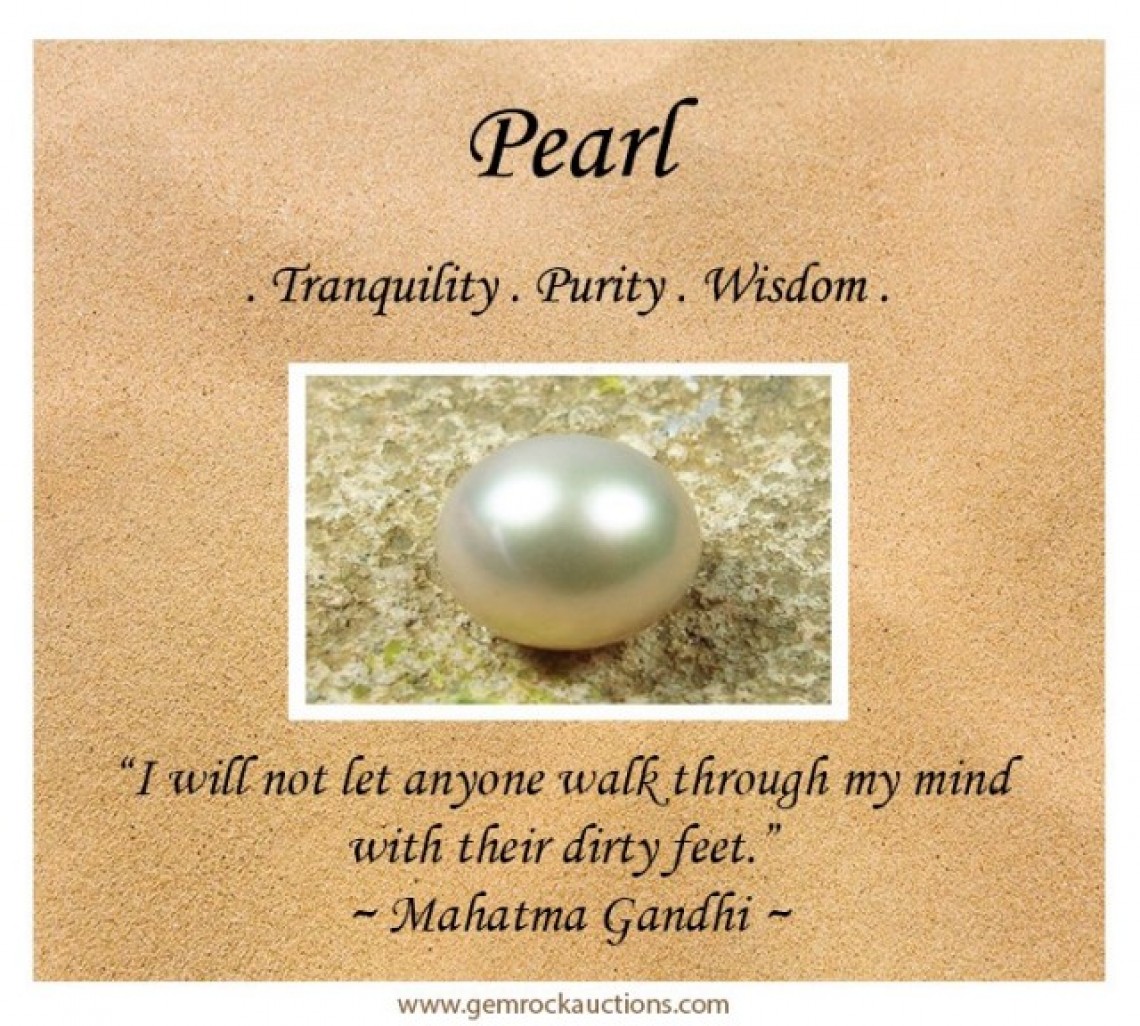 Pearls are believed to be a symbol of clarity, virtue and conviction. It also enhances personal reliability and facilitates to clear the intellectual aspect so that it fresh channel for astuteness and spiritual aspect. They were measured as tears of gods. These are moon and water ruled stones that enhance sincerity, reality and fidelity. It also brings soothing effect as well as, attunes the user to the ebb and course of life.

They are considered to provide clarity, trust, assistance and reliability, especially personal truthfulness. Due to its diluted and lunar factors, it is quite balancing for emotions, especially to water indications. Pearls facilitates an individual to connect with the Goddess, the ultimate feminine energy.

They are captivating by nature and because of this they must be used with concern. If you feeling extremely negative while using a pearl, it will uphold that energy until it is used again. Pearl is produced by layer of substance to offset irritation, which is nurturing. If this is used accurately, it can minimize stress and it usually results maladies, such as hypertension, headaches, and tiredness.

If using peals with other stones, consider diamonds to strengthen and distil bring the unhelpful energy out and diffuse it as much as possible. Additionally, it is believed that drinking pearl water habitually over a long period of time will soothe the production of hormones around the body. Persistent headaches and migraines may be treated or absolutely cured by using a pearl necklace directly on the skin.

It can also assist to decrease allergies. They are said facilitating for the treatment of stomach aches, bronchitis, colds, and lung infections. Pearls like amber, fossils, mother of pearl, and other matters used in magic is the artefact of a living creature. Some individual believe that due to the piece of evidence that the oyster must die to eliminate the pearl, that there is a serious debt gained by those who connect in trafficking pearls as well as, those who dress it in and use them, as well. Also, Pearls are closely linked to the moon, so that anyone who will use or wear them can absolutely balance and treat all chakras.

The pearl also helps for searching higher perception and truth, as well. It will soak up unhelpful energy from anybody who uses it, then, help the individuals to perceive and deal with the reality of self.

SHOP FOR YOUR OWN PEARLS 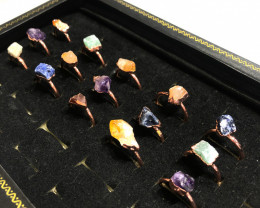 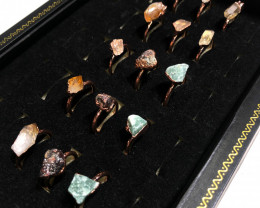 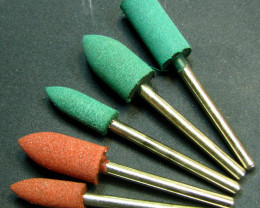