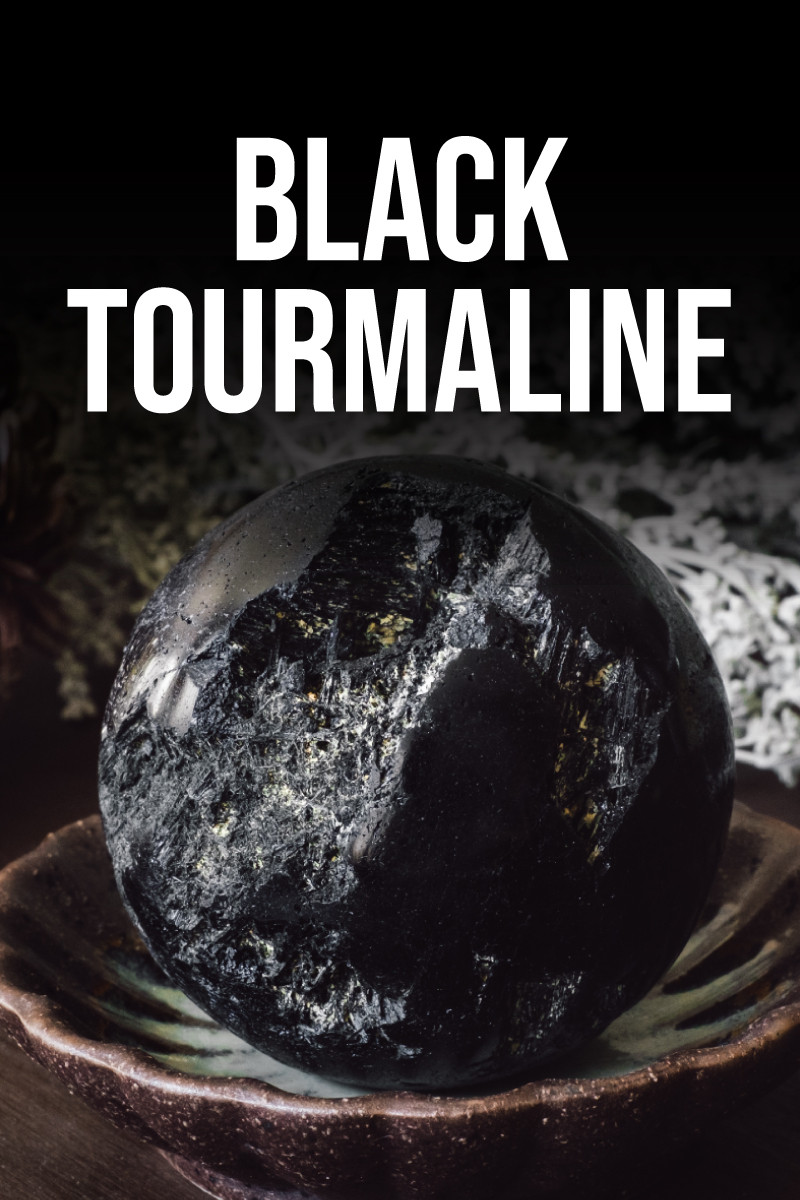 But first off, what is tourmaline?

Tourmaline is a boron silicate mineral, though the tourmaline gem family incorporates a wide range of elements.

Tourmaline crystals form in more colors than almost any other gem and share similar crystal structures. However, the chemical composition varies so much, three species were established: schorl, dravite, and elbaite.

In the US, Maine claims tourmaline as their official state mineral. The state’s soothing shorelines and snowy mountains reflect tourmaline’s abundance of calming benefits.

Today, we’re delving into all the details behind black tourmaline to uncover the mysteries behind its ebony glow.

When the seasons change and the world gets a little darker, black tourmaline comes out as the October birthstone! What better way to celebrate spooky-season birthdays than donning tourmaline black accessories?

Speaking of celebration, tourmaline is the traditional 8th wedding anniversary gemstone! Gifting your partner a black tourmaline necklace or crystal can symbolize the safety and comfort you feel around them.

Black tourmaline brings similar safety and security as a zodiac stone for Capricorn. Those born under Capricorn need to feel firmly grounded to pursue their ambitions, making this earthy gem the perfect companion.

Black tourmaline is the name for schorl, one of the major species in the tourmaline family. Schorl is the most common species, making up roughly 95% of all natural tourmaline on earth.

Schorl’s chemical composition varies but always contains silica, boron, and iron with other mineral inclusions. Black tourmaline may be an inclusion itself, like when it mixes with clear quartz to create tourmalated quartz.

Strong magnetism is another property specific to black tourmaline due to high levels of iron. The stone shows strength on the Mohs mineral hardness scale too, ranking between 7 to 7.5.

Check out the bulleted list below for all of black tourmaline’s scientific traits! 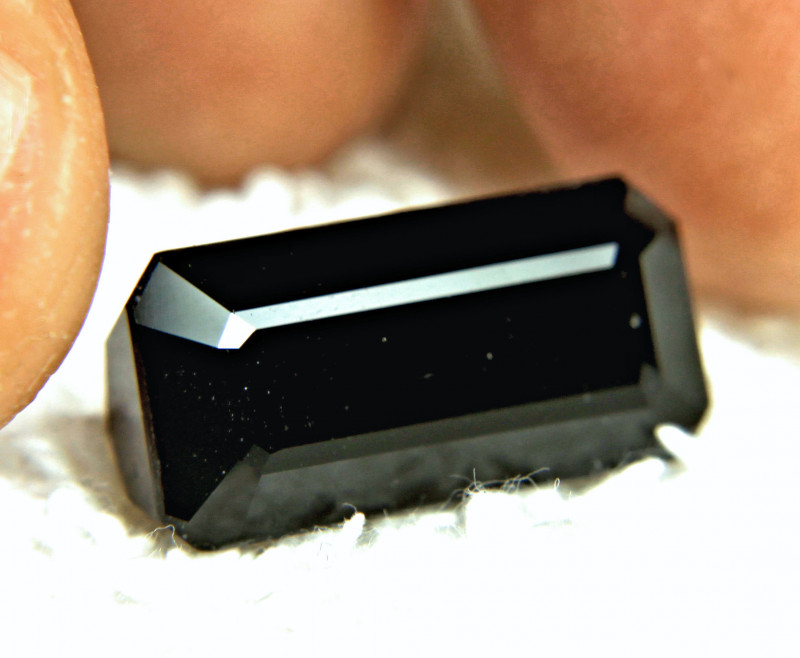 That covers the mineral side. What should we know about black tourmaline crystal meaning?

In terms of black crystal names, black tourmaline has more aliases than most. The name schorl likely started in Medieval Germany, as the village of Schorl (now Zschorlau) produced the mineral in a nearby tin mine around 1400 AD.

Tourmaline comes from the Sinhalese toramalli, meaning “mixed-color gems.” Sinhalese is Sri Lankan, but the term originated through Dutch merchants.

When Dutch miners brought gem parcels from Sri Lanka, they used tourmaline as a trade name for the multi-colored gems that often showed up.

Due to its rainbow of colors, ancient Egyptian legends say tourmaline passed through a rainbow on its way to Earth’s surface. Another mystical tourmaline stone meaning from alchemists claimed tourmaline granted similar powers to the philosopher’s stone.

In the 1700s, tourmaline crystal meaning connected to rest and artistry, with some claiming the stone could help a sick child sleep while others touted its benefits for creatives.

While death is often the assumed black crystal meaning, black tourmaline symbolizes preserving life. Ancients interpreted black tourmaline meaning as one of protection and purification, using it as a talisman to fend off evil forces and heal wounds.

On that note, what does black tourmaline do? 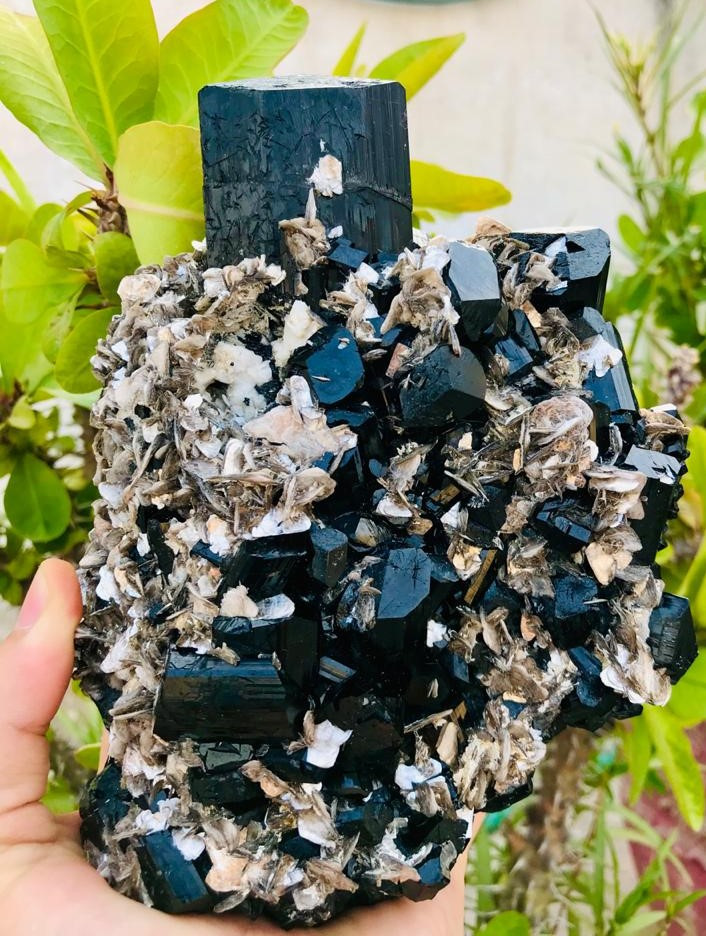 All crystals contain energies that give them special abilities as healing stones. For instance, tourmaline healing properties generally bring balance and inspiration.

As the “Stone of Purification,” black tourmaline can turn negative energies into positive, hopeful ones. Bye-bye, bad vibes!

Physically, black tourmaline strengthens, protects, and rejuvenates. The stone can enhance our immune system and cleanse toxins from the body, along with boosting energy.

Being near technology daily places us in an electromagnetic field. Black tourmaline is one of the best stones for absorbing electromagnetic radiation before it reaches your body.

Black tourmaline benefits anyone who feels encumbered by negative thoughts. The crystal can absorb the negativity for you, emitting positive vibrations back.

Once negativity is neutralized, black tourmaline can transform your self-doubt into confidence and purpose. Plus, the stone’s soothing properties are purported to reduce obsessive tendencies and promote stress-relief. 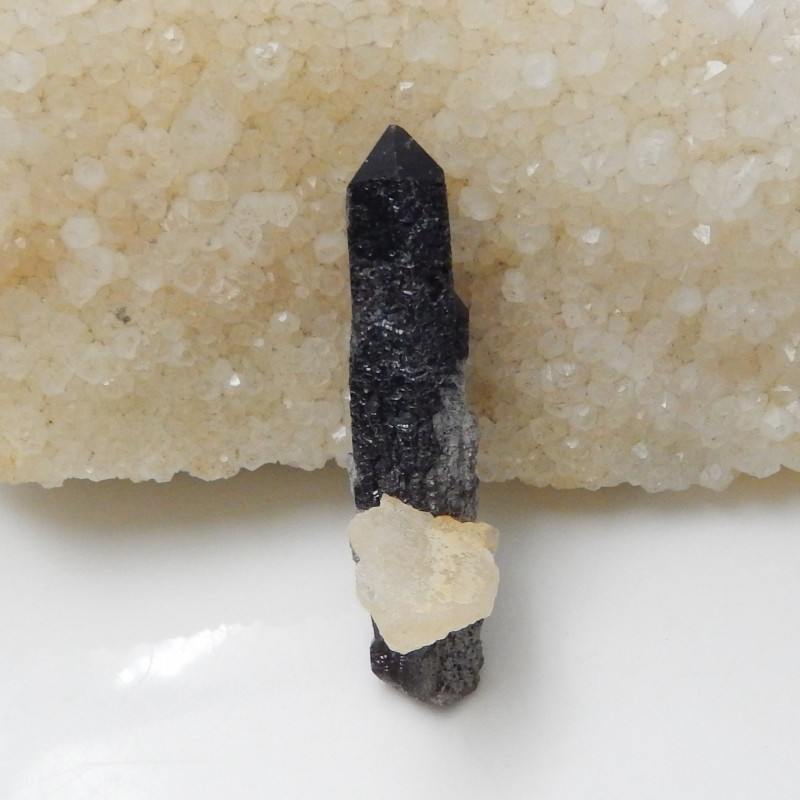 For energy work, black tourmaline chakra healing is most effective on the root chakra. At the base of the spine, the root chakra represents our fundamental need for safety and connection to the earth.

An unbalanced root chakra can lead to tiring hypervigilance stemming from anxiety. Once black tourmaline balances the chakra, you can regain a sense of security and trust that you’re on the right path.

If you’re looking to enhance your spirituality, black tourmaline is a great place to start!

With this black crystal stone in hand or nearby, your body and soul can align with the energy of the universe. Under black tourmaline protection, you can feel safe to explore your psyche uninterrupted.

Exploring different types of black tourmaline crystals? The shopping process is easier when you know what to look for, which we’ll cover next!

When you’re buying a gemstone, you want to know it’s a quality crystal, right? Besides going to a reputable shop, knowing which factors affect the stone’s value can ensure you’re getting an honest deal. The value traits to keep in mind for black tourmaline are color, clarity, and cut. 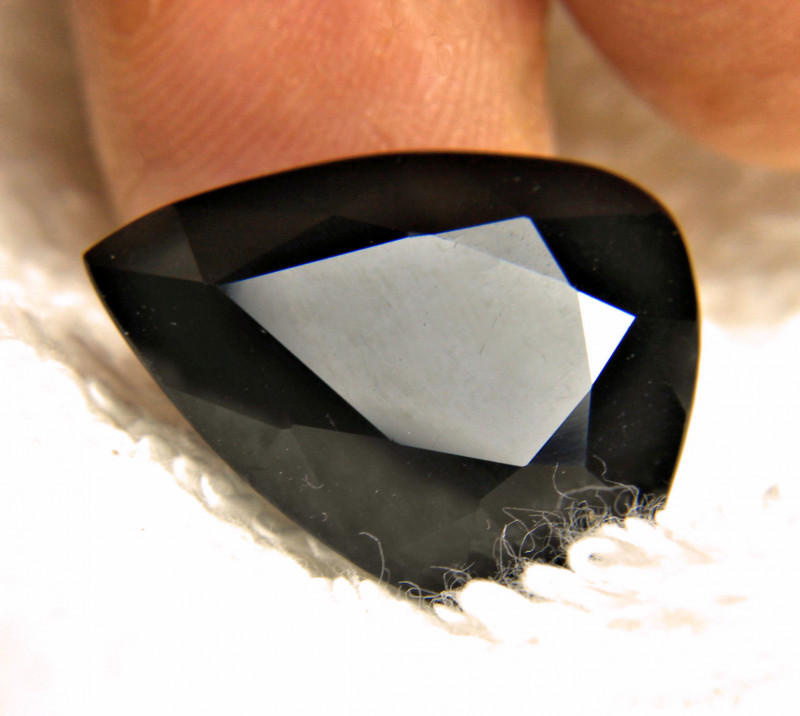 When evaluating tourmaline quality, color is the number-one factor. Black tourmaline is idiochromatic, meaning its color is limited. However, the stone isn’t one-dimensional.

Tourmaline crystals are hemimorphic, meaning the top and bottom of the crystal are often different in color and crystal form. With the right cut, the top of black tourmaline may look yellowish-brown or even olive green.

After color, cut is the second most important quality factor for black tourmaline. With any tourmaline, lapidarists typically decide how to cut the stone based on the stone’s long, prismatic crystals. Rectangular shapes are the most common and maximize the rough.

Tourmaline’s durability lends well to any cut. Black tourmaline jewelry shows off its brilliance best with faceted cuts, such as square, octagon, or oval. However, cabochons and beads are just as popular and beautiful.

Evaluating clarity requires looking at how many inclusions you can see in the stone. As an opaque gem, black tourmaline doesn’t fall under a specific clarity grade. However, this rich stone often displays interesting inclusions.

Black tourmaline may have aluminum, lithium, and/or magnesium inclusions. Inclusions may appear in several shapes: 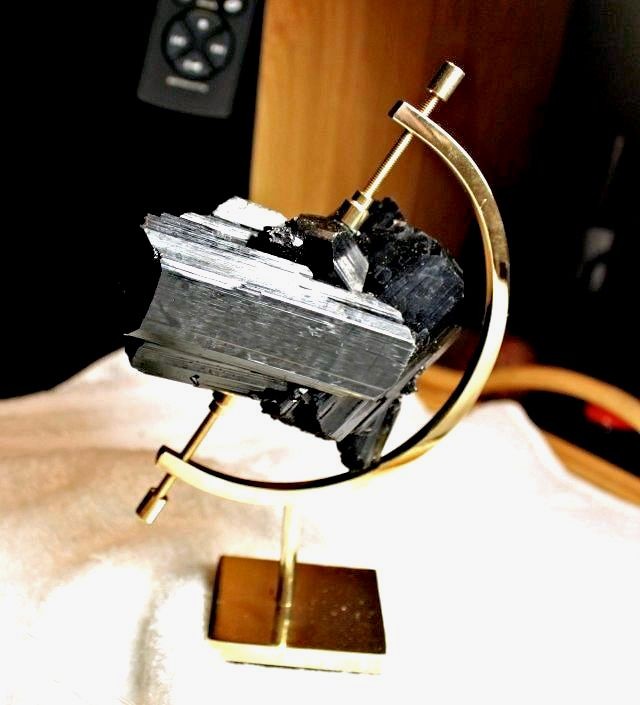 Even though schorl was around before the 1400s, the first detailed description of schorl came in 1562 from German mineralogist Johannes Mathesius.

Tourmaline’s history began in 1552, when Spanish conquistador Frances Spinoza found the mineral in Brazil and mistook it for emerald. Over a century later in 1702, Europeans got their first taste for tourmaline when Dutch traders started trading Sri Lankan specimens.

Tourmaline wasn’t a distinguished mineral until the 19th century, however. Charles Russel Orcutt, an American naturalist, wrote one of the earliest tourmaline reports in 1890 based on California specimens.

Around the same time, gemologist George F. Kunz showed up to Tiffany & Co. with tourmaline and sold the specimen Charles Tiffany, marking the beginning of Kunz’s journey popularizing colored gemstones.

American tourmaline trade thrived for years until 1912, when trade collapsed with their primary market, China. Brazil took over the tourmaline market until the 1950s, when other mines started popping up globally.

Despite the science being a mystery, the Dutch knew about tourmaline’s pyroelectricity long before Wilson. Tourmaline’s Dutch nickname was aschentrekker, as they would heat up tourmaline to draw ash out of their pipes.

Cultural interpretations of black meaning death led to black tourmaline mourning jewelry, particularly in Victorian-era England. Nowadays, England is one of many locales producing black tourmaline. Before it’s unearthed, how is tourmaline formed? 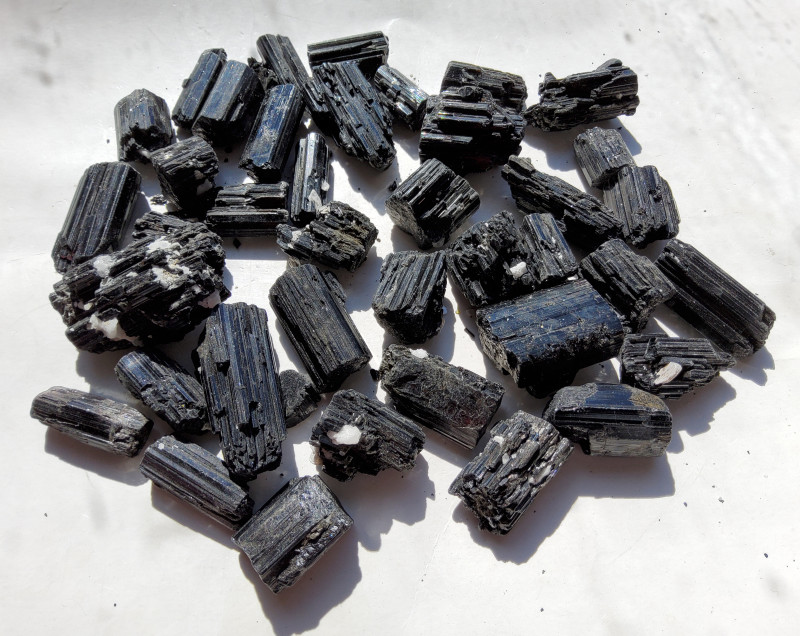 Black tourmaline formation usually occurs in pegmatites deep within the earth. Pegmatites form when magma slowly cools, allowing water to sneak out of the magma and crystallize.

Where does black tourmaline come in?

The crystals are usually parallel and elongated. Unlike other tourmaline species, schorl can grow to be several feet long. Where are these huge crystals mined?

Historically, the key tourmaline locations were Brazil, the United States, and Africa. Today, the majority of black tourmaline production occurs in Brazil and across Africa.

Where else can you find black tourmaline?

Every locale produces tourmaline gems of varying quality, so no one nation can claim the highest-quality tourmalines.

Speaking of, how does quality affect black tourmaline price? 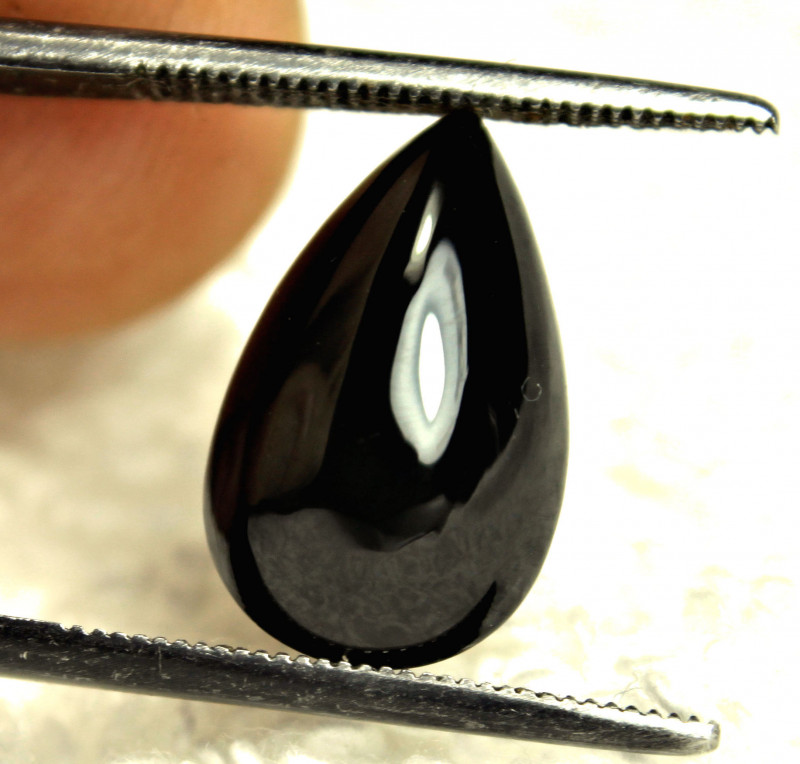 Savvy shoppers can rejoice: black tourmaline is the most affordable tourmaline stone!

While high-quality tourmaline in other colors may reach $500 per carat or more, faceted black tourmaline costs around $27 per carat on average.

The price of faceted black tourmaline largely depends on the level of craftsmanship. Simpler shapes typically range from $6-$20 per carat, while intricate cuts are usually $30-$60 per carat.

Raw black tourmaline has the lowest price, ranging from $0.10-$1 per carat at wholesale prices.

Lastly, let’s talk about how to ensure your stone lasts a lifetime.

To clean the stone, wipe the surface with a dampened soft cloth or soft brush and let it air dry after. Prolonged exposure to water, especially saltwater, can damage black tourmaline, so avoid letting it soak for long.

On the spiritual side, black tourmaline side effects can bring negativity to your environment if you don’t cleanse it regularly.

Wondering how to cleanse black tourmaline? We recommend one of the following:

Get Grounded with Black Tourmaline!

With that, you have everything you need to know about the magic behind black tourmaline! If you’re searching for black crystals, you can’t go wrong with the moody and ever-mystic black tourmaline gemstone. While the stone honors fall and winter birthdays, black tourmaline is perfect for anyone who wants to stay grounded all year round!