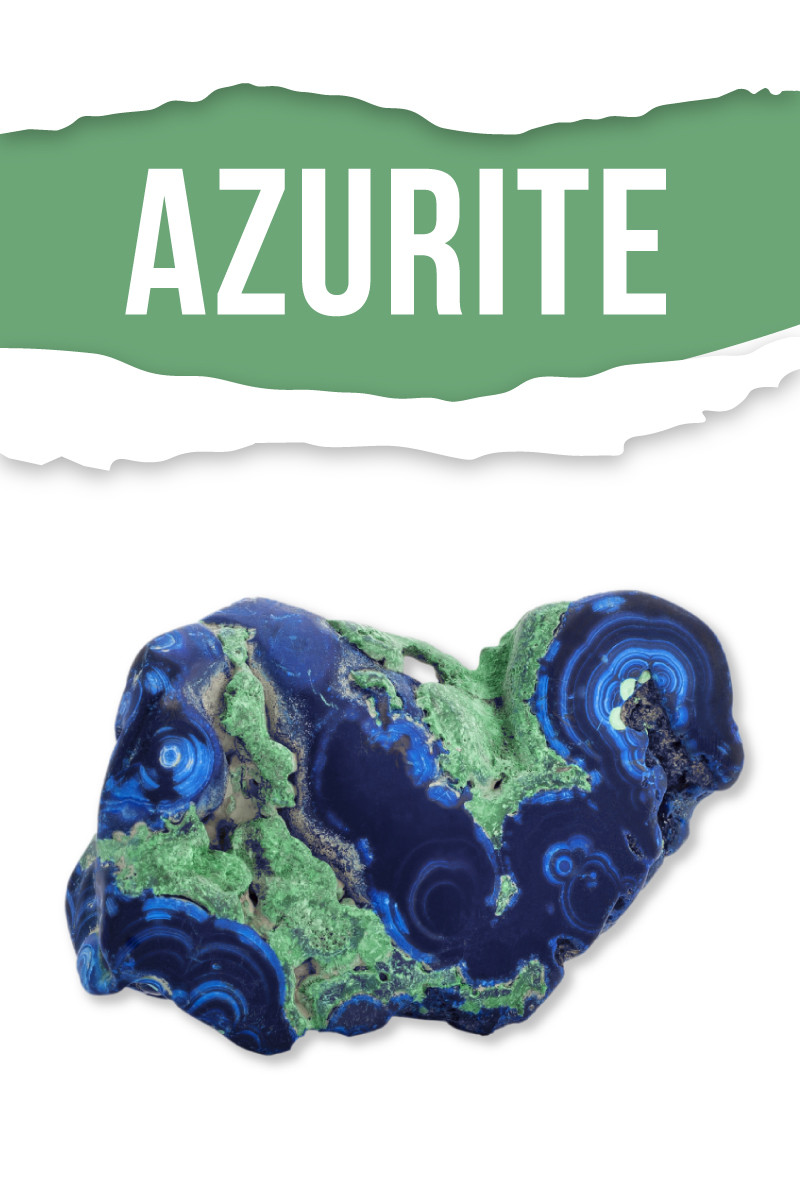 Azurite is a blue copper carbonate mineral known for its vibrant color and long history in the arts. The stone’s vivid cobalt hue led artists to grind it into paint and dye for centuries, and the color can be seen in some of the world’s most famous artwork.

German artist Hans Holbein the Younger used azurite pigment for the blue background of his portrait Lady with a Squirrel and a Starling, which likely depicts Anne Lovell, the wife of Henry VIII’s esquire.

Azurite’s significance extends far beyond the art world, however. In this guide, we’ll fill you in on everything you need to know about azurite stone, from how you can use it for healing to what goes into azurite value.

Azurite is an ancient semi-precious gemstone that reflects the shifting blues of the sky. Most often, azurite displays the rich, deep blue of the sky at dusk, similar to Van Gogh’s Starry Night.

Those born under Sagittarius are honored with an azurite zodiac stone! Besides this azure gem tying to the blues of winter, azurite stone metaphysical properties encourage the intellectual Sagittarius to dive into their passion for knowledge.

Often, azurite mixes with its fellow copper carbonate to create an azurite malachite combination. The new stone, called azurmalachite, is perfect for our Aquarius friends!

Besides azurmalachite’s resemblance to a globe, wearing azurite malachite jewelry can bring out Aquarius’s humanitarian traits, encouraging their commitment to bettering the world.

Azurite stone is one of the only basic copper carbonate minerals on earth, only joined by malachite. Azurite is less stable than malachite, and weathering often transforms azurite into malachite.

Azurite can form as druzy, a crystal growth containing lots of tiny, reflective crystals that shimmer like sugar. Azurite may grow inside other crystals, especially malachite and chrysocolla.

On the Mohs mineral hardness scale, azurite minerals rank at a low 3.5 to 4. For the rest of azurite’s scientific details, check out the list below! 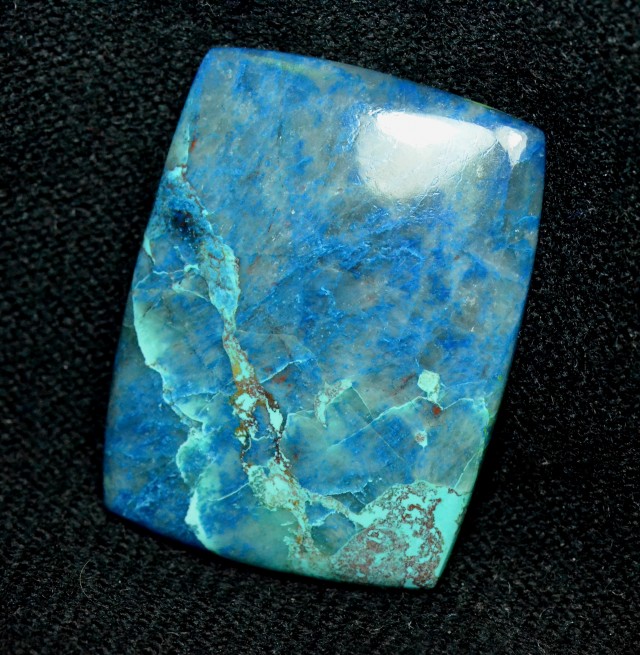 Moving from mineralogy, what should we know about azurite crystal meaning?

Azurite gemstone has a few monikers, including lapis armenus, azurium citramarinum, and its first name: lajevard. The word lajevard is an ancient Persian term for an area on the Arabian Peninsula known for its azure-blue gemstones.

Ever heard of lapis lazuli? Azurite and lapis lazuli were both originally named after the Lajevard area. Known in Arabic as lazaward, the Latin term eventually took over as lapis lazuli, or “azure blue stone.”

Indigenous peoples like Mayans and Native Americans tied azurite meaning to psychic abilities. Mayans saw azurite as a tool for receiving wisdom from the spiritual realm, while Native Americans used the stone to get in touch with spirit guides.

Within Greek mythology, azurite is connected to Athena, the goddess of war and wisdom. Egyptian myths associate azurite with Isis, the goddess of life who symbolized healing and insight among other powers.

Egyptians also believed azurite connected to the young sky god Horus and would sometimes use azurite paint to put the eye of Horus on their foreheads for protection.

We know ancient uses, but nowadays, what is azurite used for? 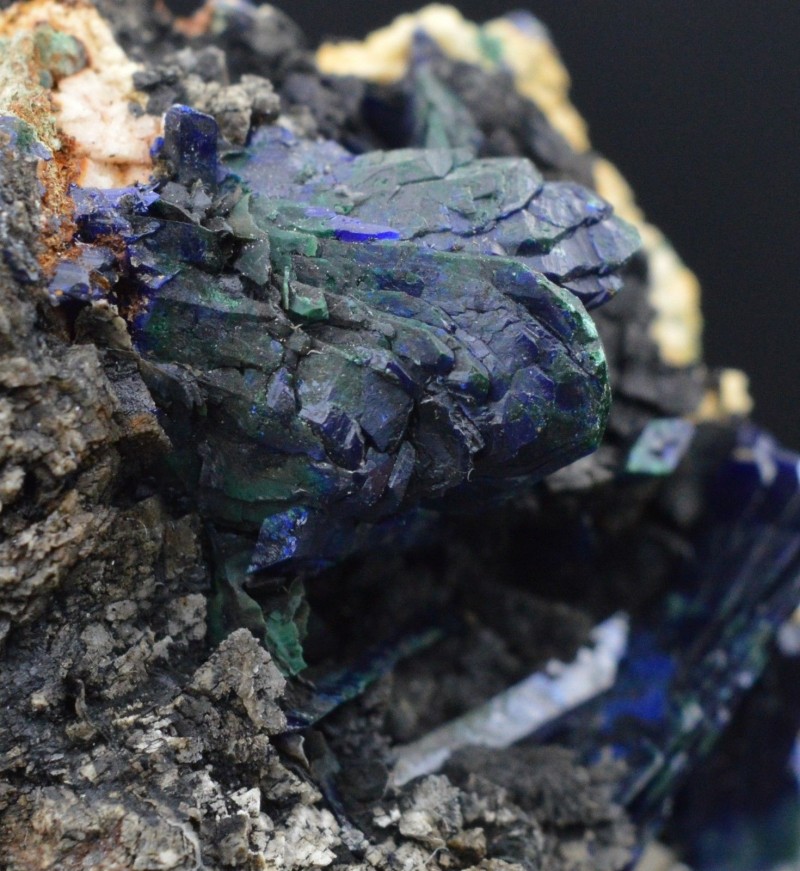 What sort of specific healing can you practice with azurite gemstones?

Azurite healing properties can target the upper body, alleviating soreness in the throat, shoulders, and neck. The stone is purported to boost blood circulation and reduce vertigo.

Azurite is commonly used for alignment, particularly for aligning the spine or joints. The stone’s ability to clear pathways can be used for increasing neural pathways to the brain to slow the effects of aging on mental agility.

If you struggle with feeling inferior, insecure, or unworthy, azurite is here to help. Emotionally, azurite metaphysical properties can dissipate negative self-talk and low self-esteem.

For tension in relationships, be it familial, romantic, or friendly, azurite may provide clarity on what the root of the issue is. Once the source is addressed, azurite can encourage an open, honest dialogue so you and your loved one can move toward healing.

More into chakra healing? You can azurite for balancing the third eye chakra! The third eye or brow chakra is all about higher understanding, where we view the world and ourselves with acceptance and awareness.

When the third eye is unbalanced, we may feel controlled by our negative reactions, stuck in a restless state of inaction. Holding or wearing azurite jewelry near the chakra, like azurite earrings, can balance the third eye and allow us to do things we enjoy without feeling held back.

Ready to start healing with azurite? Before you buy one, read our buying tips below to ensure you get good-quality azurite. 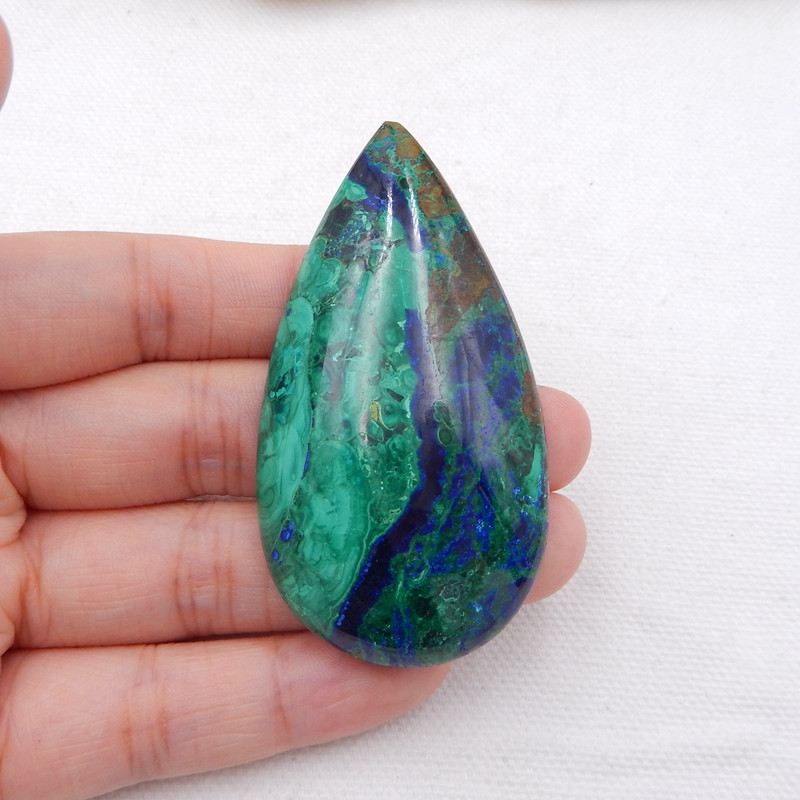 Any gem expert or collector knows that every stone’s value depends on its properties, traits that experts use to determine its quality.

When shopping for azurite, the traits to keep in mind are color, cut, carat weight, and treatments.

Azurite color is always blue, though it may appear pale, vibrant, or dark. Larger azurite crystals are usually deep blue, whereas smaller crystals may be paler due to weathering.

When malachite mixes in, malachite lends bright green speckles to azurite’s blue background. The combination stone, known as azurmalachite, may also be banded. Funny enough, copper is the reason for azurite’s blue and malachite’s green.

Azurite hardness, perfect cleavage, and heat sensitivity make cutting the stone tricky. Faceted azurite is rare and only made with small crystals. To prevent breakage, faceted azurite often goes on jewelry that’s safer from being hit, like earrings and pendants. 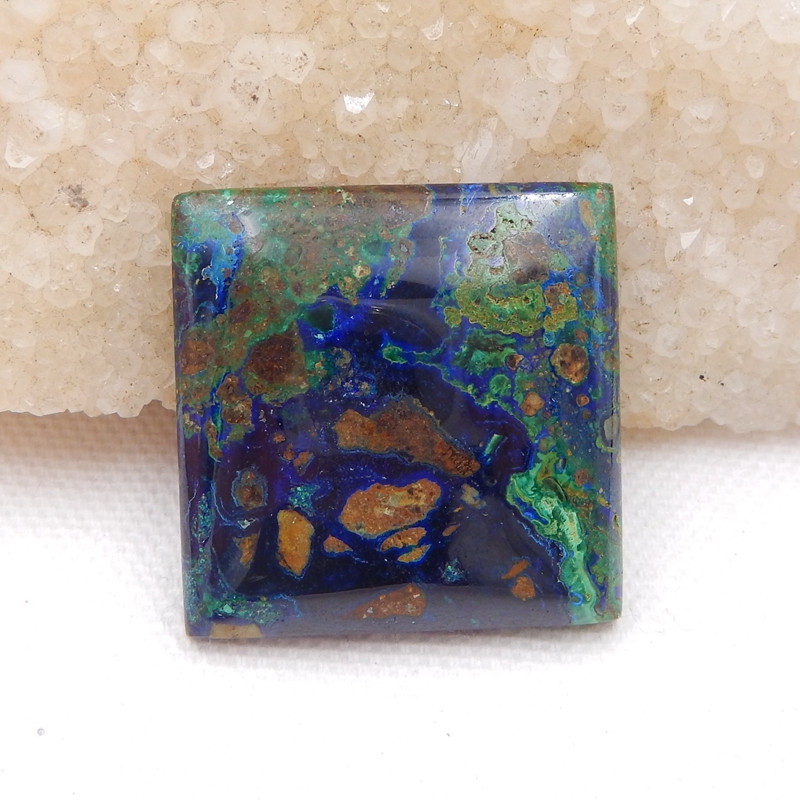 Azurite rough is usually found as massive or nodular specimens, and gemstone-quality crystals are rare. Any facetable azurite crystal will typically be under 2cm long.

Large azurite specimens are usually darker in color. Jewelers often use these large specimens to create azurite cabochons. However, massive azurite is usually a mixture of azurite and malachite, which many lapidaries carve into beads or decorative objects to show off the stone’s intricate color patterns.

Azurite is rarely treated with dyes or heat, but coatings and fillings are common. Typically, fillings are employed to give the stone better stability. To improve azurite’s luster, the stone may get a wax or resin surface coating.

Synthetic azurite is popular with geologists as a scientific specimen and for painters as a cost-effective pigment. For gemstones, synthetic or reconstructed azurmalachite is more popular, created by impregnating compressed azurmalachite with plastic for use in jewelry or cabochons.

Processes for creating azurite synthetically began centuries ago and played a crucial role in azurite’s history. 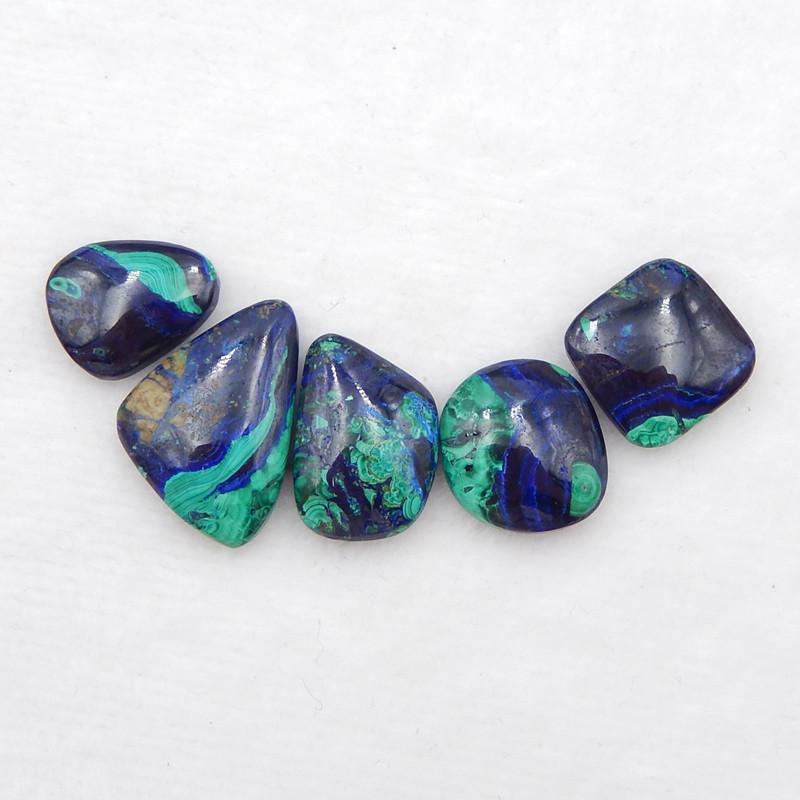 East Asia has a fair share of azurite paintings as well, including ancient cave paintings in Western China and multiple 15th to 18th-century wall paintings in Tibetan palaces and monasteries.

From the Middle Ages to the Renaissance, azurite was Europe’s key source for blue pigments. The majority of Europe’s azurites came from France.

In the 18th century, man-made pigment for creating blue colors replaced natural azurite, as the new pigment was more consistent, cost-effective, and easy to work with.

While azurite doesn’t have a long history as a gemstone, some jewelers have utilized the stone’s stunning color.

One such person is David Webb, a renowned American jeweler known for creating pieces for high-profile clients like Elizabeth Taylor and Barbra Streisand.

Webb incorporated azurite and azurmalachite in creating carved or diamond-studded azurite rings. Some of Webb’s pieces are still on auction, like a gorgeous azurite malachite ring from the 1970s.

Before it’s crafted into gorgeous pieces, how is azurite formed? 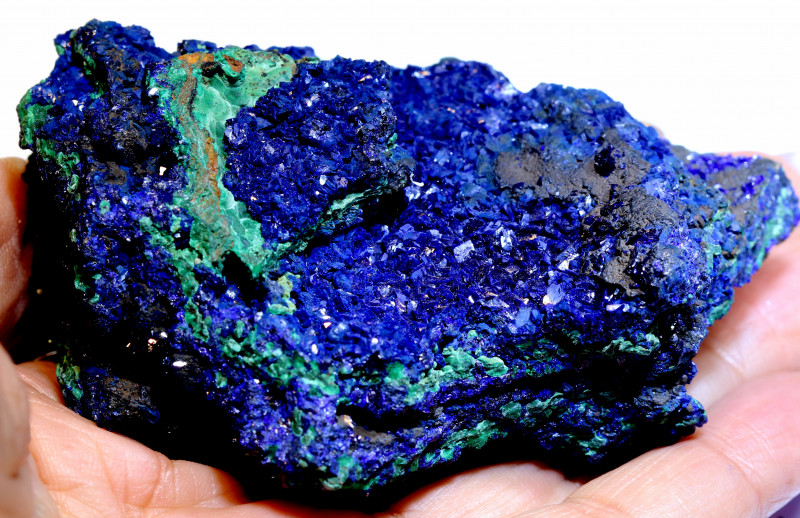 Azurite gemstone formation happens through an interaction between carbon dioxide-rich water and copper ore. The solution causes the copper ore to gradually dissolve as the water slowly evaporates, leaving us with azurite.

Miners often look for azurite and/or malachite to know whether a deposit contains substantial amounts of copper.

Malachite in azurite mines may not have started as malachite. Azurite is a pseudomorph of malachite, meaning azurite sometimes transforms into malachite. When this transformation occurs, weathering causes water molecules to replace carbon dioxide molecules, resulting in the new stone.

After it forms, where is azurite found?

Today, the most prominent azurite deposits are in the US, France, and Australia. The most productive US mines are in Arizona, Utah, and New Mexico.

Where else can you find azurite?

Now, let’s talk about price. How much does azurite cost? 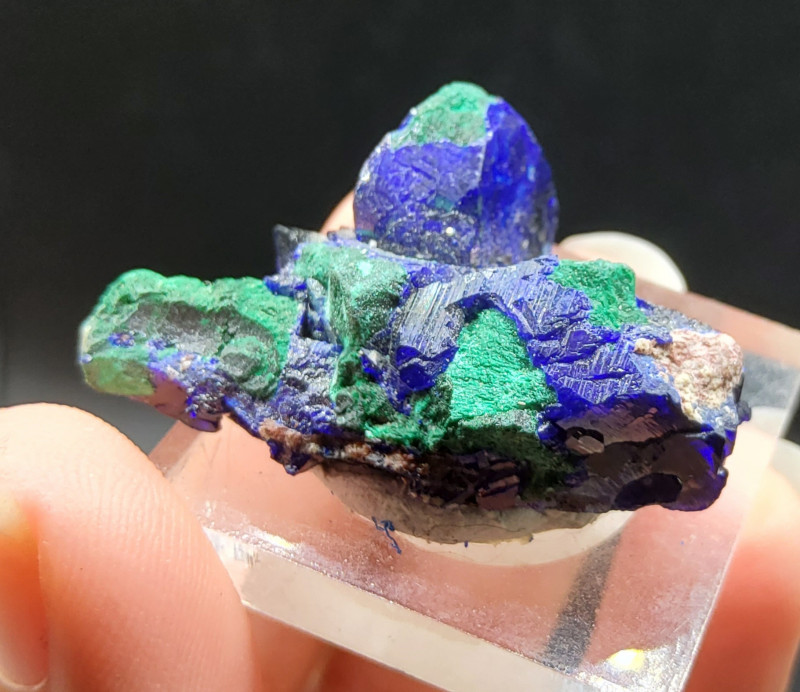 Despite the many places you can find azurite, the mineral alone isn’t abundant. Keep this in mind when looking at how much azurite is worth.

Since pure azurite is the rarest form, it costs the most. Tiny specimens of pure azurite, whether raw or tumbled, will usually be $20 to $50 at least. Even rough azurite, when pure, can cost upwards of $10,000.

You’re more likely to see malachite mixed in with an azurite mineral, which brings azurite cost down significantly.

Rough azurmalachite is usually $0.40-$1 per carat at wholesale prices. A malachite and azurite cabochon typically costs around $1 per carat.

To clean azurite, we recommend using a soft cloth to gently wipe the surface. You can use cool water but keep azurite away from acidic cleaners.

Like a beloved pet, azurite, unfortunately, ages more quickly than we do. The color can fade under intense light and even open air. Under the heat, azurite will completely lose its color and structure, turning into black powder.

Be sure to remove azurite jewelry when participating in physical activities or if you’ll be in direct sunlight. For safety, never work on azurite specimens without protective gear, as inhaling copper dust is dangerous.

That’s a wrap on azurite! With its rich hue and wealth of healing properties, it’s no wonder azurite is called the “Stone of Heaven.”

Anyone who carries an azurite gem or wears an azurite bracelet is sure to feel the stone’s heavenly vibrations! 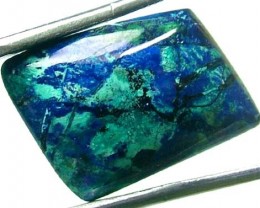