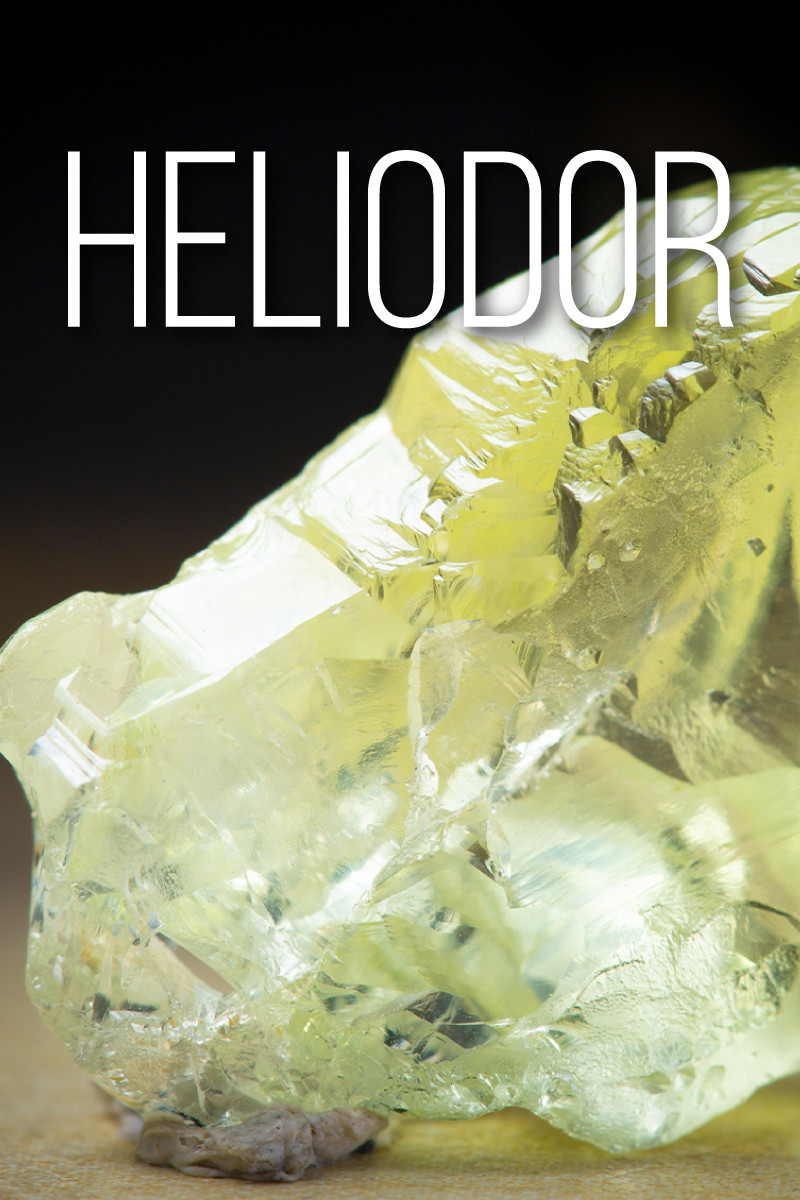 Most casual gem lovers know aquamarine and emerald, but one lesser-known beryl stone is heliodor! Heliodor is a yellow beryl gemstone with a near-flawless appearance and excellent durability, perfect for any accessory!

Beryl stones have been beloved for centuries, appearing in Biblical references, employed in new inventions, and explored through many mystical uses. Today, the U.S. state of New Hampshire recognizes beryl as their official state mineral.

Heliodor is a noble beryl, a term for any colored beryl gemstones that aren’t aquamarine or emerald. As a noble stone, is heliodor expensive?

We’ll answer that question today, along with all your other queries about heliodor properties, healing uses, and more! 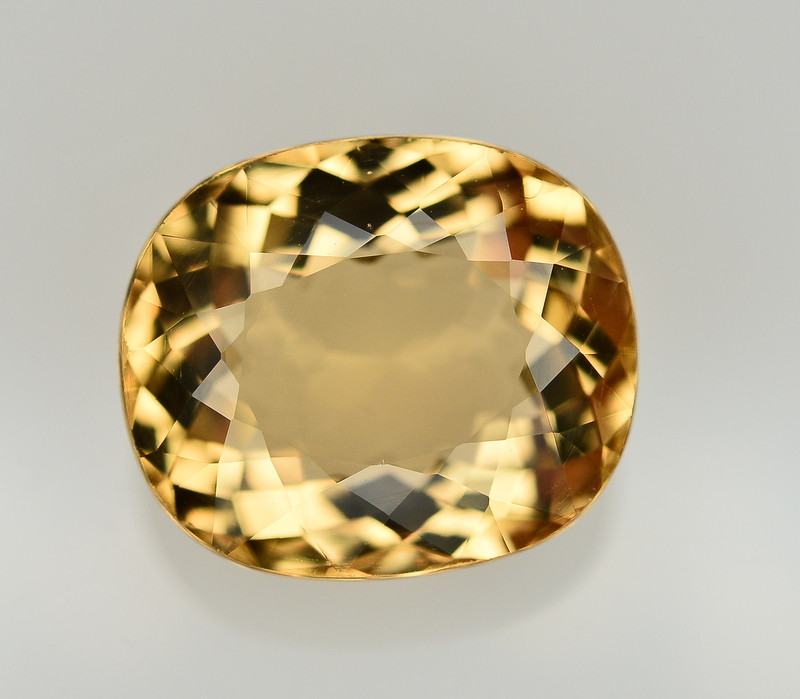 What Is Heliodor Stone?

Heliodor is a semi-precious gemstone that comes in shades of yellow, greenish-yellow, and golden-yellow.

Astrologically, heliodor is a zodiac stone for Gemini and Leo, the sign ruled by the sun! Regardless of your sign, many astrologers suggest wearing a heliodor gemstone ring to bring mental clarity, good health, and prosperity.

For prosperity in marriage, heliodor is an alternate option to the traditional gemstone (onyx) given on the 7th wedding anniversary.

November babies have three birthstones to choose from: topaz, citrine, and yellow beryl (heliodor). Browsing birthstone options, you may wonder: how can you tell heliodor from citrine?

Gemologically, citrine is less scratch-resistant and has a different chemical composition. Visually speaking, however, the easiest distinction is that citrine often has warmer, orange undertones while heliodor has green undertones.

Heliodor is composed of beryl, aluminum, silica, and iron. Heliodor joins other beryl gemstones like goshenite, morganite, and the recently discovered pezzottaite.

On the Mohs mineral hardness scale, heliodor hardness ranks at an impressive 7.5-8, only beneath the top precious gemstones. Check out the other heliodor properties below! 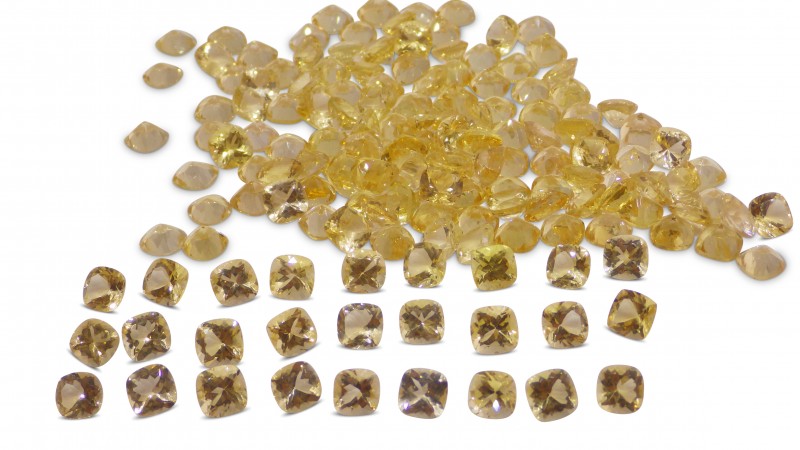 Now that you know what heliodor means geologically, what is the heliodor spiritual meaning? 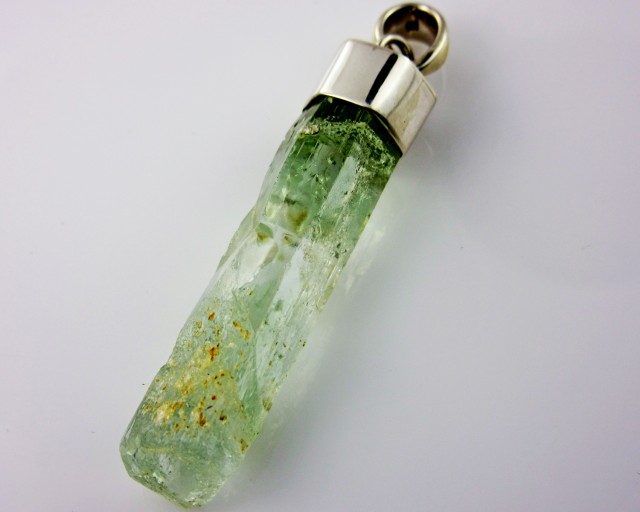 The name “heliodor” comes from the Greek helios for “sun” and doro for “gift,” altogether making “gift of the sun.” In fact, many ancients thought heliodors controlled the shift from day to night. Plus, ancient Romans tied the stone to the sun god, Helios.

In ancient astrology, heliodor was a gemstone of Jupiter, the planet of luck, prosperity, and opportunities. Therefore, many believed the stone could attract abundance.

What about heliodor’s parent stone? What is the spiritual meaning of beryl?

The Bible recognized beryl as one of the twelve gemstones on the High Priest’s Breastplate, as well as one of the ten foundation stones in Revelation. Moreover, priest Ezekiel described God’s throne having wheels that looked like “gleaming beryl” in his book.

Elsewhere in history, beryl gemstones held significance as mystical tools. In Scotland, they were called “stones of power,” while Celtic druids used shiny beryls for scrying, a form of clairvoyance. In fact, mystics created the first crystal balls out of beryl!

Heliodor specifically symbolizes generosity, hope, and power. Nicknamed the “Stone of Selfless Leadership,” many healers claim heliodor crystal can bring inspiration, empathy, and altruism to those in leadership roles.

Speaking of, what does heliodor do spiritually? 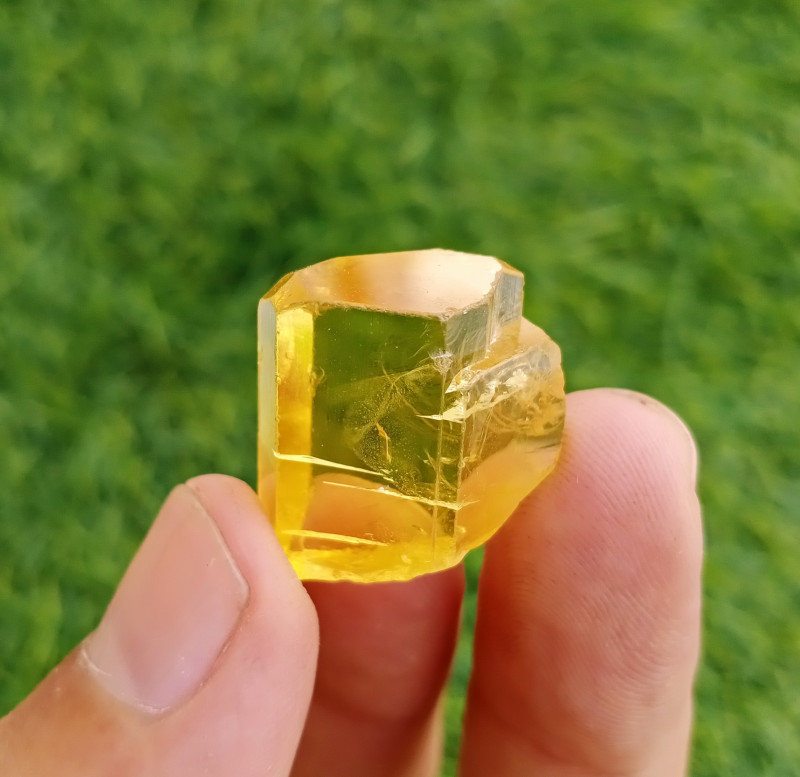 By virtue of their energy and creation, all crystals have the potential to be healing stones, and heliodor is no exception.

For specific goals, what is heliodor used for? Let’s explore each area of heliodor gemstone benefits.

Heliodor physical healing benefits may include resolving issues in the liver and spleen, along with other digestive issues like nausea or bladder dysfunction.

Some claim heliodor crystals can help your body better fight illness and resist the effects of pollutants or toxins. Others tout the stone’s ability to help women cope with the symptoms of menopause.

Heliodor is a fire gemstone, bringing your inner fire to the surface. It’s said to increase confidence, strength, and determination.

Some say heliodor can soothe worries, reduce fatigue, and ward off those who’d want to use you. Altogether, heliodor is a powerful companion for becoming your healthiest, most confident self.

What chakra is heliodor? Heliodor corresponds to the solar plexus chakra, the center of personal growth. When the solar plexus is blocked, you may feel detached or unsure of yourself. After using a heliodor gemstone to open the chakra again, you can feel hopeful and empowered in pursuit of your purpose.

If part of that pursuit involves crystals, all the better! But before you buy heliodor, it’s best to know what goes into its value. 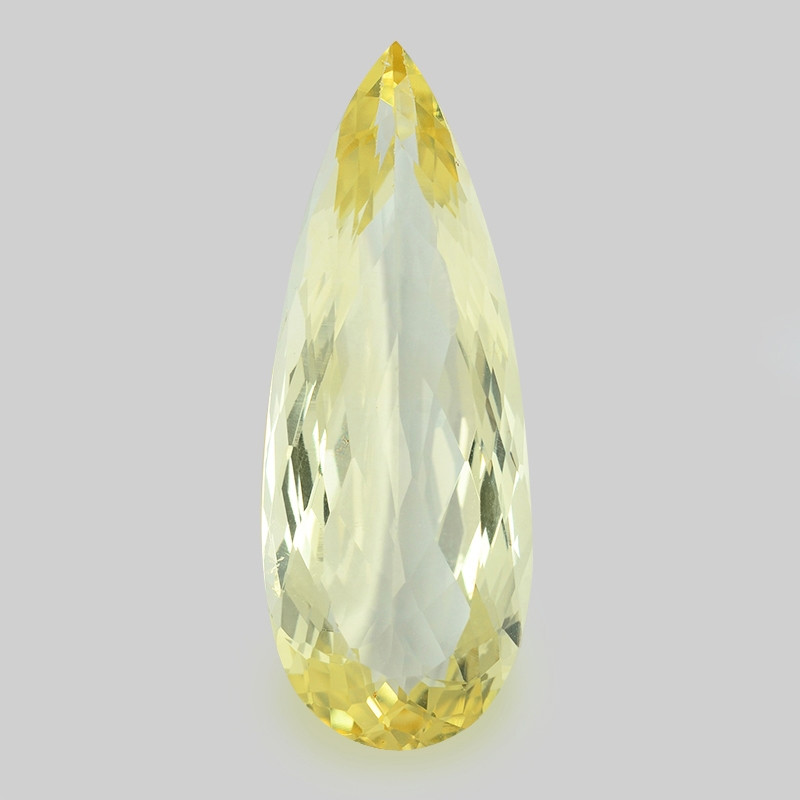 If you’re not sure what the true value of a stone is, that’s where gemstone properties come in! Experts examine key traits in each gem to determine its objective value, so that you can feel confident in your purchase! 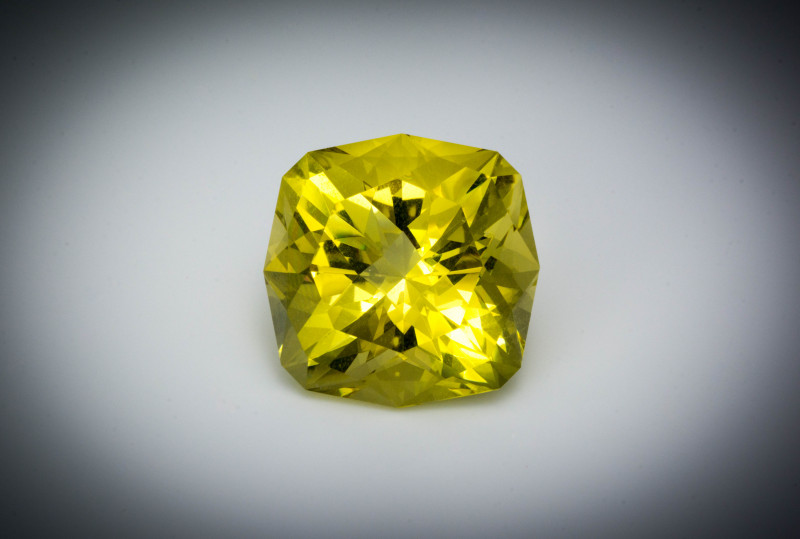 Beryl gemstones are allochromatic, meaning the stone’s pure form is colorless and any coloring comes from additional elements. In heliodor’s case, its color comes from the presence of ferric iron.

The amount of iron determines the specific hue heliodor falls into. If iron replaces some aluminum, you’ll get golden-yellow. Other iron concentrations lead to a green heliodor undertone. 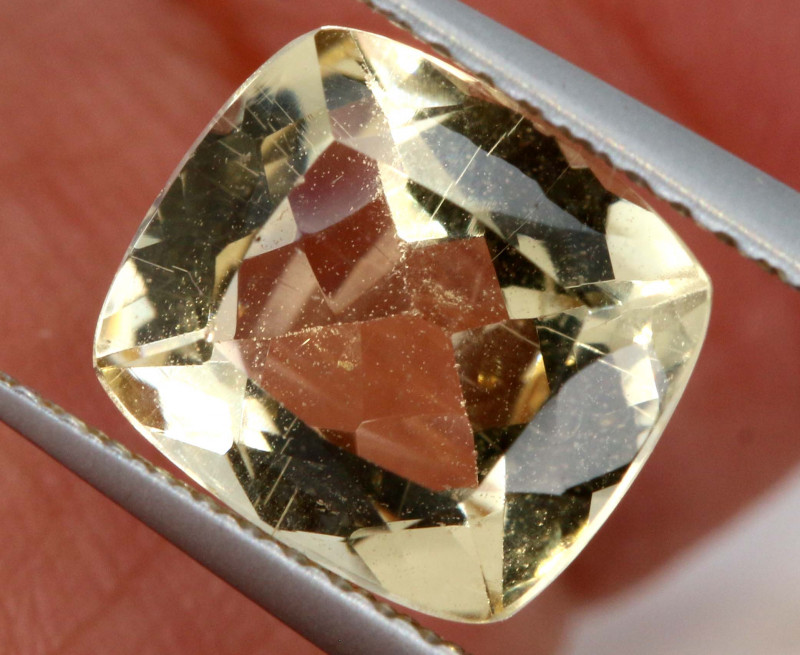 Gemstone clarity refers to the amount and visibility of inclusions in the gem. The colored gemstone clarity grade system puts gems into three categories: Type I, Type II, or Type III.

You’ll see different types of inclusions in heliodor, like:

Silk inclusions (very small parallel threads) can create chatoyancy—the “cat’s eye” effect. If the silk fibers are dense and oriented correctly, you may also see asterism, a four- or five-star ray of light on the surface. 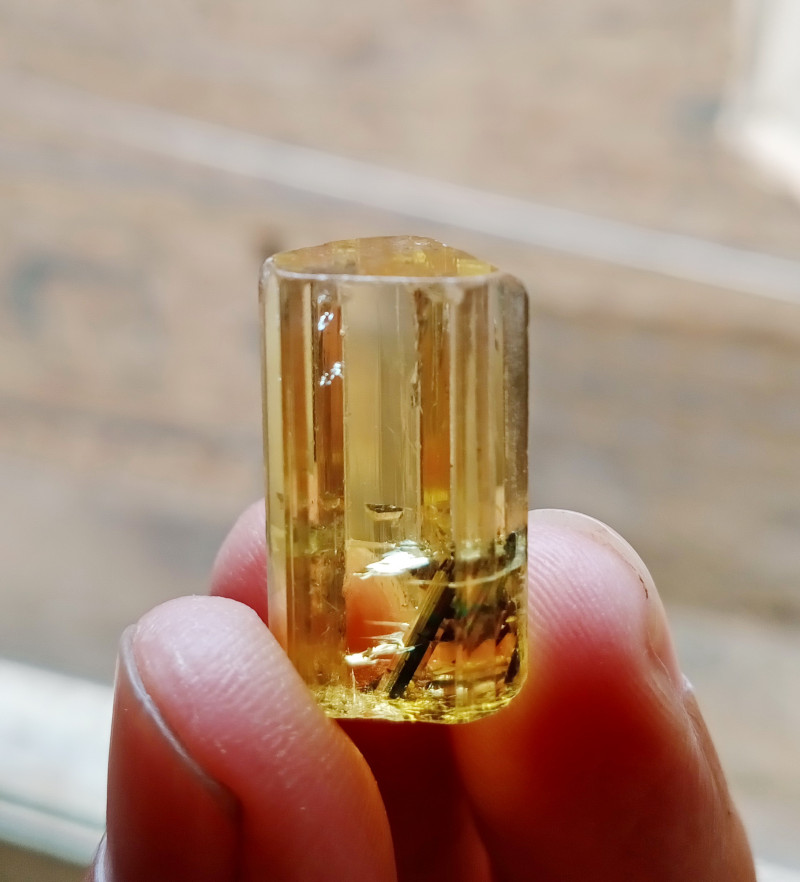 Unlike rarer beryls like morganite and emerald, heliodor and aquamarine come in a range of sizes. However, good quality large heliodor gems are not as common. Even still, larger heliodors reportedly have the best golden-yellow coloring.

Typical heliodor treatments are heating, irradiation, dyeing, and impregnation. Most heliodors are irradiated, and only some are heated. In fact, only a select few mines worldwide produce heliodor rough that can handle irradiation or heat treatment. 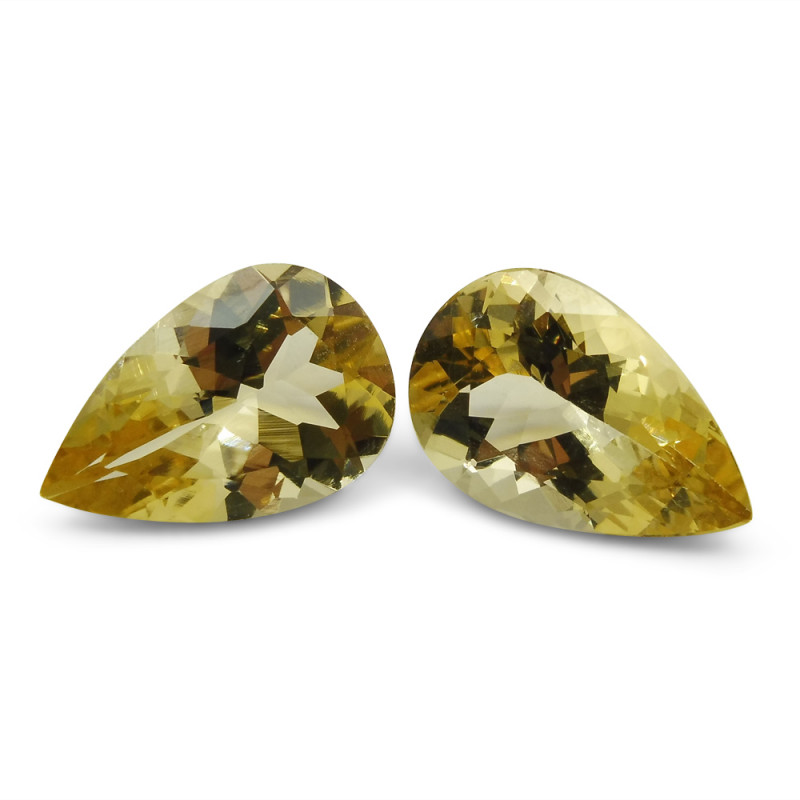 Heliodor lends to virtually any cut. In faceted cuts, mirror polishing can create a wonderful shimmer as light dances among the facets.

Heliodor with chatoyancy or asterism is always cut as cabochons. As heliodor is a more abundant beryl variety, plenty of rough heliodor specimens are large enough for mesmerizing heliodor carvings.

According to 19th-century English scholar Thomas Kelly Cheyne, “Some of the finest examples of ancient Greek and Roman gem-engraving are found executed in beryl.” What other heliodor history lies ahead? 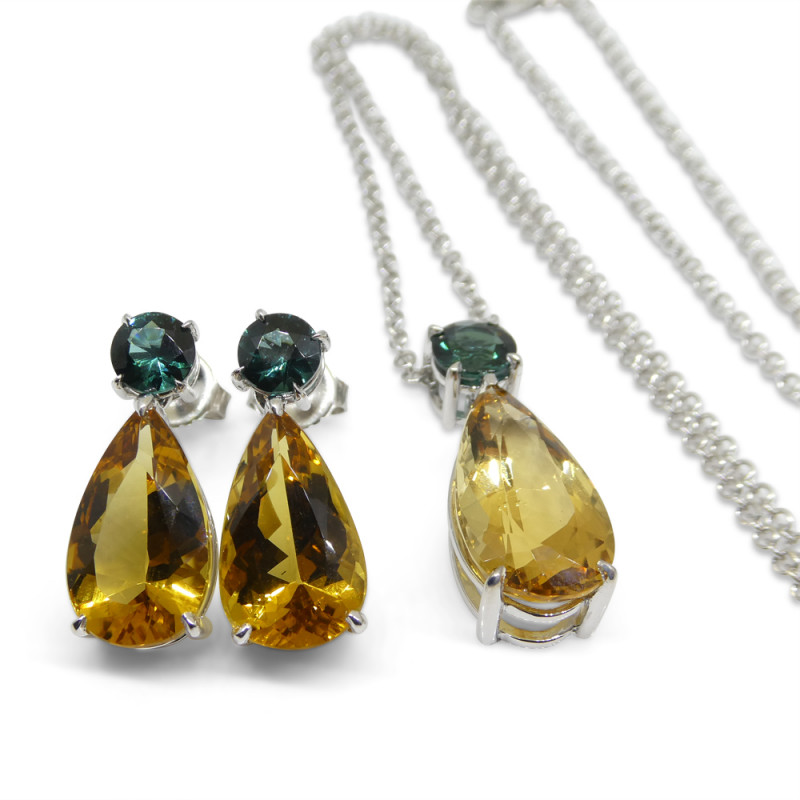 However, as one of beryl’s key elements, beryllium, is carcinogenic, we don’t suggest trying this yourself!

Beryl was among the earliest gems used by ancient Egyptians for animal carvings. Inventive Italians in 1400 AD used beryl to create the first model of eyeglasses, as glass at the time wasn’t as clear.

“Heliodor” actually began as a trade name for golden beryl from the original Rössing, Namibia locale, but has come to describe all yellow beryl.

In 1914, the German mining company that made the Namibian discovery had a heliodor-and-diamond jewelry set created for the German Emperor to gift the Empress. The royal association boosted heliodor’s popularity until WWI, when heliodor fell out of public recognition.

Now that’s a big rock, and that was after faceting! What happens before the heliodor comes to jewelers, though? How does a raw heliodor gemstone form? 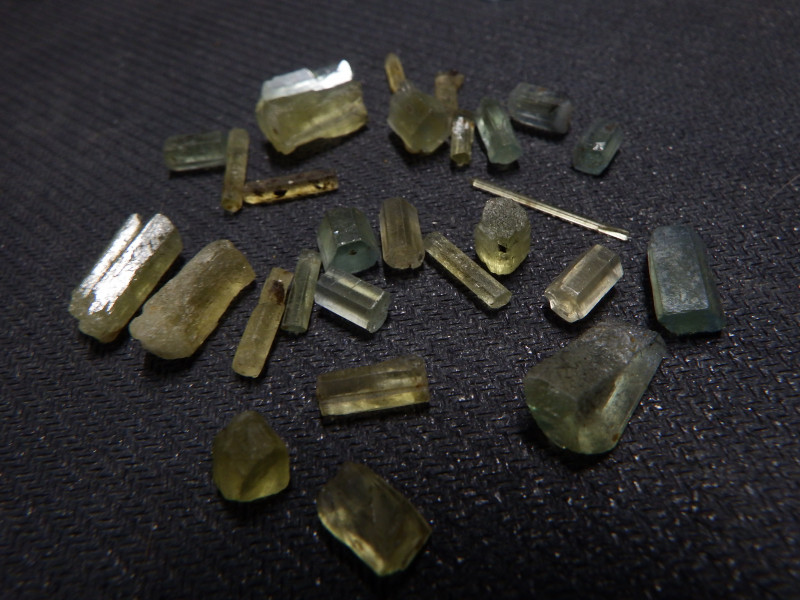 Heliodor, like most beryls, almost always forms in pegmatites. Within pegmatites, hydrothermal deposits create the perfect environment for heliodor to crystallize.

Hydrothermal gemstone formation involves water flowing underground and collecting dissolved minerals along the way. The solution eventually settles into cracks or crevices and crystallizes. The beryllium present in heliodor comes from cooling magma nearby.

Once formed, you can identify some heliodor rough by its prismatic crystals with etched faces, caused by its chemical composition changing from overpressure.

Once it’s ready to be mined, where is heliodor found?

Today, the best heliodor specimens come from Brazil, Ukraine, and Nigeria. In fact, Brazil’s mines produce about 90 percent of the world’s heliodor, while Ukrainian miners have uncovered some of the largest, highest-quality specimens.

Other prominent heliodor locales include:

Most buyers are more concerned with the end result, however, so let’s talk price. What is heliodor worth? 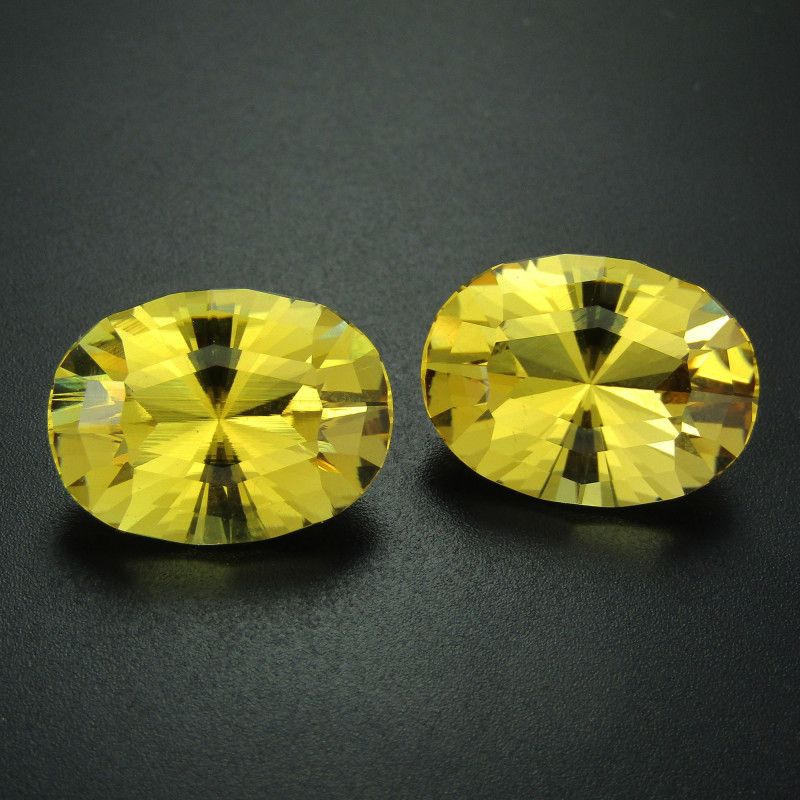 The highest-value heliodor gemstone for sale would have bright golden-yellow coloring, no defects, and no green or brown undertones.

Large, high-quality stones like this can cost $60-$120 per carat, while similar-quality heliodors in pale yellow-green or orange usually cost around $30-$50 per carat.

Compared to other beryls, heliodor is on the low end price-wise. Both color and carat weight can dramatically alter the price per carat.

The heliodor price per carat reduces significantly in tan-yellow or pale specimens. These are typically roughly $10 per carat when around 2 cts. Golden-yellow specimens from 0.5-2 cts range from $15-$30 per carat.

Outside of faceted options, 20-40 ct., golden-yellow, untreated specimens here at GRA usually go for $9-$15 per carat.

Heliodor’s excellent durability and typical lack of inclusions make caring for it easy. You can use mechanical cleaning systems on heliodors without inclusions, though we recommend consulting an expert for underlying weaknesses before going in with your ultrasonic on high-blast.

Of course, you can also use the classic method of cleaning your gem in a solution of mild soap and warm water, and gently clearing away dust or debris with a soft brush. Dry with a microfiber cloth, and your gem will be sparkling like new!

Harness the Sun With Heliodor!

Whether you want to celebrate your zodiac sign, incorporate some sunshine into your crystal healing, or invite more happiness into your life, heliodor stones can do it all. Simply wearing a heliodor ring will brighten your day and infuse your spirit with power that stretches back centuries.

Looking for your own sun gift? Buy heliodor gemstones today! 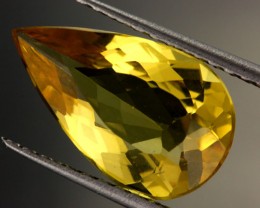